“Hey, Exalted One: Henry here. Listen, you’re just not going to believe this but I’ve put my report together and it should be arriving by email about now.”

“Why shouldn’t I believe you sent me an email, Henry?”

“No, not the email but what’s in the email.”

“Please explain why I wouldn’t believe what you’ve sent; all your previous reports have been accurate.”

“Yes, I’ve studied the pictures you’ve sent me. What else?”

“These animals call themselves ‘humans’ and have some strange belief that they are separate from all other living and non-living things.”*

“Separate from non-living things? How is that possible? Don’t they drink the water and breathe the air?”

“That they do, but they don’t place much value on things that can’t protect themselves, which is why they conduct truly destructive practices such as strip-mining They have no respect for inanimate objects, as strange as it may seem to us.”

“I’m sorry, but I must be missing something. They need the planet to survive yet they pollute the water? What kind of convoluted reasoning is this?”

“There’s a well-known psychiatrist who writes a lot of textbooks on how the human brain works who uses the phrase ‘empty skulls whose contents weigh zilch.’”

“Are you referring to Professor Zorkophsky, one of the screenwriters for that soon-to-be-blockbuster ‘The Dandelion War’?”

“Quite correct, O Exalted One. The Egyptians of old would weigh the soul of the recently diseased, and if the scales showed that there was none, the soul would be sent to a Republican camp there to recite the United States Constitution for eternity.” 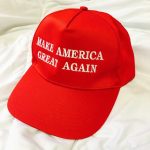 “And they would be forced to don MAGA hats, ‘Make America Great Again’ hats.”

“That is so, Magnificence. The Democrats have assembled a carnival act that will travel across the country, entertaining as they go. The current leader of the group has the most empty skull of them all by an infinitesimal.”

“You said by an ‘infinitesimal’; so the others are also empty-headed?”

“They believe rolling back the tax cuts; bringing back crippling regulations and, get ready:  Socialism.”

“No way. Don’t they know that Socialism has never worked? What’s wrong with them, anyway?”

“They suffer from TRUMP DERANGEMENT SYNDROME.”

“It sounds catching; is it?”

“What’s the catch in Socialism?”

“The end of freedom and the beginning of doing without.”

“And the people don’t know this? Why, just look at Venezuela.”

“Well, all I can say is that there sure seems to be an inordinate number of empty heads in America. But getting back to this Derangement Syndrome, a lot of the blame has to go to the teachers’ union who, for the last half-century, has failed to teach a lot of the kids how to read and speak English; television shows such as ‘The View,’ ‘Morning Joe’ and the ‘Rachel Maddow Show’ harp on blaming everyone except their audience for being stupid. I mean, why don’t they say ‘Turn this stupid show off and go read a book’?”

“I think you’ve been on earth a little too long. I think the Democrats ought to take a step back and look at themselves in the mirror: do they accept defeat or do they double down and go into oblivion? There’s just no way they can stop the tide of overwhelming evidence for the attempted overthrow of the Trump presidency. Thank you for the report.”

[*The concept of “Mother Earth’ was held dear by the tribes of the American Indians, where the giver of fresh, clean water was to be revered.]

Zyklon Conducts a Wellness Survey added on Friday, May 3, 2019