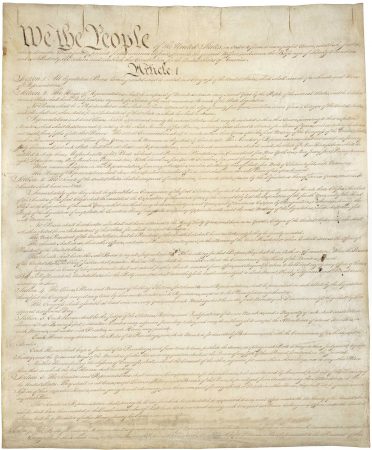 (Apr. 13, 2017) — “Good evening, ladies and gentlemen, and welcome to yet another interesting episode of ‘Pulse of the Nation.’ We’re in the auditorium at the university about to hear Chief New Leaf give a short talk about the American Indian’s perspective on the state of the Union. This place is packed to the gills: standing-room only. Funny, there aren’t many students present; I’d say the audience is 90% city folk. And there’s the Chief walking on to the stage.”

“Good evening, and what a pleasant surprise to find this fine place filled with such an accommodating audience. Your welcoming applause is most appreciated. I am, however, quite disappointed that there are so few young people among us tonight. But that’s the way of the young in America today, isn’t it? The kids talking Greek and knowing the ways of instant communication while we old folk still send Christmas cards and take the time to write a personal note or two, in longhand, or script, as it’s called these days, a fading art form of communicating if there ever was one.

“The music playing in the background is called ‘The Cherokee Morning Song.‘ There were rumors of a possible protest, as if whatever I might say could possibly ‘offend’ anyone, but I invited a couple hundred American Indian young men, all of who are Veterans, to, once again, don their uniforms with pride as they surround this building.

“Furthermore, these American Indian Veterans are armed with a variety of weapons and have all served in a War Zone somewhere in the world. Those who served at one time or another as a member of the Military Police and the Shore Patrol are wearing the appropriate armbands, so I can assure everyone that the chance of us being interrupted or put in danger in any way is as close to zero as is humanly possible.

“The discussion for this evening is ‘Freedom.’ During the years of Obama we almost lost our country, and had Hillary been elected I have no doubt I’d have been met with an ‘accident’ or gone the way of Edward Snowden: running for my life.

“But lucky for me and you, Trump prevailed, and the Treaties between the United States government and our Indian tribes have been restored in that we trust that the Constitution is, once again, the law of the land.

“But that doesn’t mean we can afford to relax and let our guard down. On the contrary, it was our first president, George Washington, who said, ‘In time of peace, prepare for war,’ and how prudent he was. And it was Benjamin Franklin wh said, when congratulated on our Republic, ‘if we can keep it,’ which gives pause to the phrase that we must be, ‘eternally vigilant.’

“Truths are universal, and one truth that we’ve completely overlooked is how dependent America has become on our systems and how interconnected they all are. One small slip-up, one part of the puzzle going haywire has the potential to put us ALL at risk.

“Now when I say ‘at risk’ we could be discussing an EMP blast, an epidemic or lighting hitting a series of transformers around the country at the same moment. One would think that, in the home of the free, we wouldn’t be so vulnerable to disasters, but vulnerable we are.

“Under my authority, as Chief of all the Indian reservations, well, unofficial Chief of all Indian Reservations, I want to tell you that we have made giant leaps and bounds to be independent, meaning just about all of our electrical needs can be duplicated in house, so to speak. And the same goes for food, shelter and most medical emergencies, although our dental capabilities surely need improvement.

“Now here’s the point: we are suggesting that each community be as self-sufficient as possible. These towns in the vicinity of cities condemn farm and grazing land so easily for multi-housing projects to garner additional funds for what? Schools that don’t teach? More police cars and fire trucks at the cost of growing vegetables that will feed your population, is what. The priorities are skewed, and not in your favor, I hasten to add.

“People don’t think because they haven’t been taught how to think. We have Harvard and the other Ivy League schools and we’re just as backwards as if everyone went to a junior college without a library. It doesn’t do any of us a lick of good if the smarts you have aren’t applied. Just look around your own apartment or house and pick out the weaknesses.

“So you have four years of ‘higher education,’ but you don’t have a guaranteed water supply, or a month’s supply of food on hand, or even a week’s worth. So I ask you this: where’s your freedom? Where is it? If you’re so dependent on the rest of the world, where is this ‘freedom’ you tout about and shove in everyone’s faces?

“I’m not here to put blame on anyone: but I do want you to think, okay? Think about improving your lives by making you all more free, not less.

“Now during my closing soliloquy, as it often seems, we’ll be hearing the piano version of a song called the ‘Lakota Lullaby.‘

“Freedom: the absence of dependency. We need to make the human race more independent from external stimuli, certainly to a far greater degree than it is now. We start being independent where we live: in our homes and communities. And that’s my talk. Thank you for being so attentive.”

“Roving, here, and as the Chief takes some questions we’ll be signing off. On behalf of the crew, I wish each and every one of you a goodnight: Goodnight.