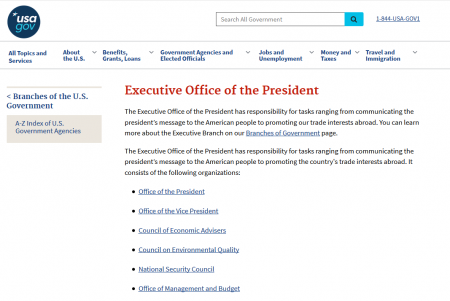 (Apr. 27, 2019) — On Saturday afternoon, someone logging in from the Executive Office of the President (EOP) opened an article at The Post & Email published Thursday titled, “Transcript: Congress Knows about Dennis Montgomery’s Spying Allegations.”

The subtitle is, “WERE THEY ALSO GIVEN EVIDENCE OF OBAMA BIRTH CERTIFICATE FORGERY?”

The Executive Office of the President has responsibility for tasks ranging from communicating the president’s message to the American people to promoting our trade interests abroad. You can learn more about the Executive Branch on our Branches of Government page.

Our article reported that during the second congressional closed-door interview of former FBI General Counsel James Baker last fall, Rep. Mark Meadows (R-NC11) revealed his awareness of allegations accompanied by reported millions of data records showing that the U.S. intelligence community conducted widespread warrantless surveillance of Americans between 2004 and 2010, if not longer.

The entry indicates that the reader found the link to the article on Twitter.

Those surveilled, according to records produced by former NSA and CIA contractor Dennis Montgomery, include Trump, a number of his family members and business associates; more than 150 federal judges, including one presiding over a lawsuit against then-Maricopa County Sheriff Joseph Arpaio, who authorized the investigation into the “long-form” birth certificate image posted eight years ago today at whitehouse.gov; Arpaio’s lead birth certificate investigator, Mike Zullo; former U.S. Justice Department prosecutor Larry Klayman, who came to represent Montgomery in 2015; and a number of outspoken media personalities such as Alex Jones.

After supervising Montgomery’s work as a confidential informant for Arpaio’s office in 2014, Zullo introduced Klayman to Montgomery.  With assistance from both men, Montgomery presented the evidence of surveillance he said he had to a federal judge followed by two FBI agents in 2015 under DOJ-issued immunity agreements for production and testimony.

Klayman later followed up with then-FBI General Counsel James Baker, as Baker acknowledged in the transcript, who Zullo said “deep-sixxed” any investigation into Montgomery’s claims.

In 2016, Baker reported to then-FBI Director James Comey, whose firing on May 9, 2017 served as the catalyst for certain top FBI and DOJ officials to discuss ways to remove Trump from office, according to Baker’s and others’ testimony to members of Congress investigating the origins of the Trump-Russia “collusion” probe.

During his second interview with members of the House Oversight and Judiciary Committees on October 18, 2018, Baker said that the relatively small group of FBI and DOJ officials discussing Trump’s possible motivation for firing Comey considered that he might have done so at the behest of the Russian government (p. 132).

A 22-month probe by Special Counsel Robert Mueller following the FBI’s initial investigation ended last month in no findings of “collusion” or conspiracy between the Trump campaign and Russian operatives.  Attorney General William Barr has said he intends to discover whether or not “spying” he believes took place on the Trump campaign was “adequately predicated.”

According to Zullo, Montgomery said that included in his 2015 data package provided to the FBI was the evidence from Zullo’s five-year investigation into Obama’s “long-form” birth certificate, declared to be a “computer-generated forgery” at a press conference on March 1, 2012.

The image was uploaded to the White House website eight years ago on April 27, 2011 and immediately pronounced suspect by a number of experts, prompting 242 of Arpaio’s constituents to press for a formal criminal probe.

After agreeing to what Arpaio believed would be a short review to “clear the president” of all suspicion, former New Jersey detective and “Cold Case Posse” leader Mike Zullo informed Arpaio after several days that the image was deeply problematic. The investigation continued for more than five additional years at great personal risk to Zullo, his family and others and ended in December 2016 with Arpaio pledging to deliver all of the evidence compiled to federal authorities.

Much of the information has yet to be released publicly.  In a November 2018 interview with Carl Gallups of “Freedom Friday,” Zullo said the evidence was provided to “very, very high, high, high-level White House officials” who were given “a cursory briefing of the information that we garnered about the certificate.”

The following month, Zullo said on the same show, “There is no original certificate; there never was.”

The mainstream media has consistently scoffed at anyone doubting Obama’s presidential eligibility, claimed birthplace in Hawaii in 1961, and the authenticity of the “long-form” image despite the results of the investigation, which were confirmed by two outside forensic analysts working from different continents and disciplines, each unaware of the other.

Zullo has said that media executives “colluded” to avoid reporting on the investigational findings surrounding the birth certificate.

Trump, who raised the Obama “eligibility” question to a national level in early 2011 and claimed credit for the release of the “long-form” image, often excoriates the media for what he says is “fake news.”  In response, on Saturday evening, White House Correspondents’ Dinner (WHCD) president Olivier Knox said at the organization’s annual event, which Trump declined to attend, that the term is not “presidential.”