(Feb. 15, 2019) — Since his 1999 conviction for allegedly selling marijuana to an undercover agent and confidential informant, former Shelby County, TN Sheriff’s Office (SCSO) Sergeant Earley Story has been attempting to clear his name of a crime which evidence indicates he did not commit.

Story was first charged on January 31, 1997 and prosecuted by District Attorney General William Gibbons‘s office, but Judge Ann Pugh dismissed the case for “lack of probable cause” in a hearing on April 3 that year.  In August, the SCSO rearrested Story for the same alleged crime, securing the conviction 16 months later in addition to terminating him from its employ.

The date on which Story was convicted of selling the marijuana was January 22, 1997.  He was acquitted by the jury of two earlier dates that month of which he was accused of doing the same.

Shelby County, which encompasses the city of Memphis, comprises Tennessee’s 30th Judicial District and the county jail where Story was was working when he was arrested. Having witnessed a rape, a death and other civil-rights violations and maintaining meticulous notes and records, Story began reporting the jail conditions to the Memphis FBI, the NAACP, and then-Memphis Flyer reporter Phil Campbell. 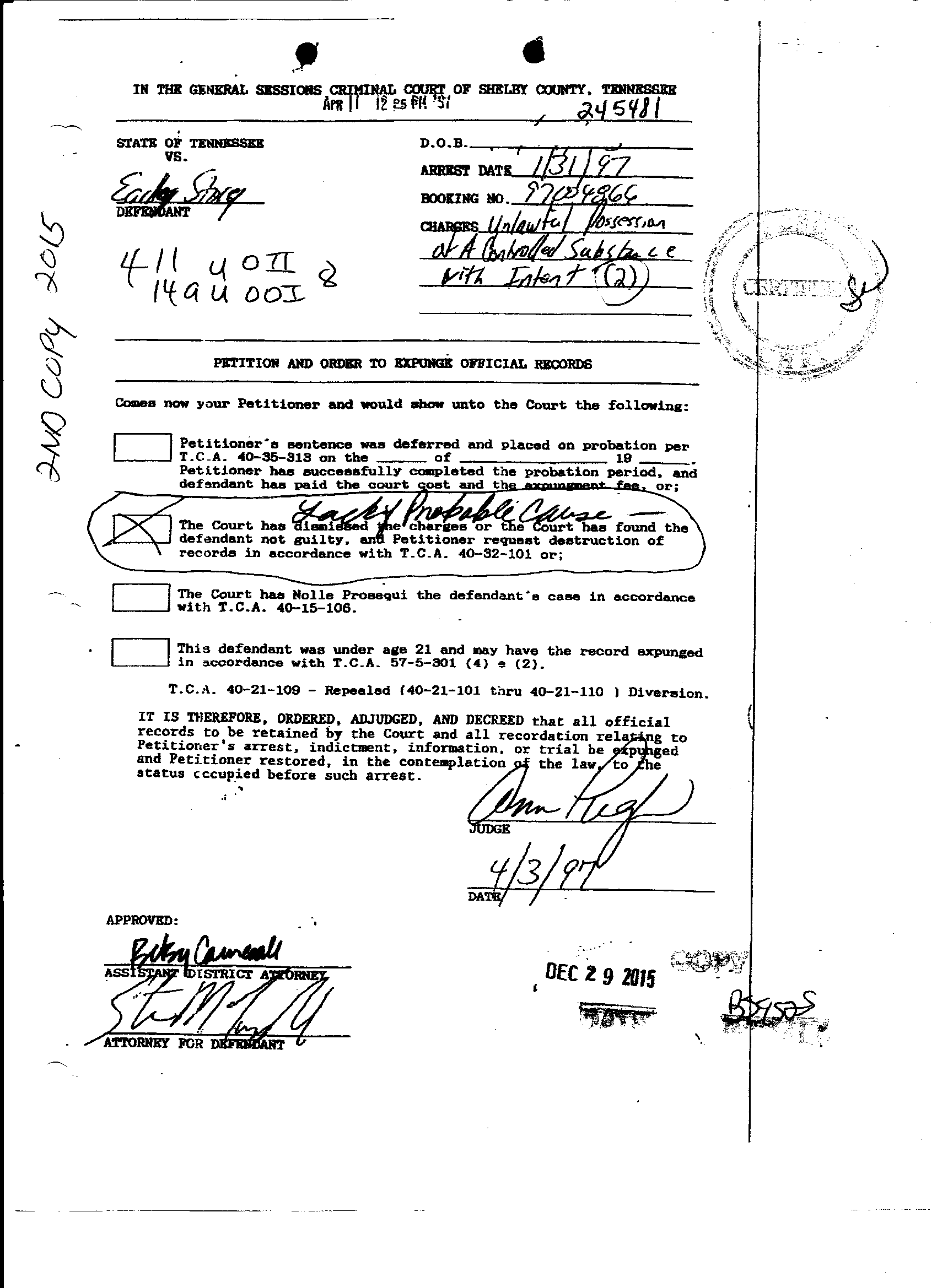 Story is convinced the allegation and conviction came about as a result of his whistleblowing, major portions of which were confirmed by the U.S. Justice Department in a report directed to then-Memphis Mayor Jim Rout.  The DOJ’s inspections of the facility emanated from a 2005 federal lawsuit [Little v. Shelby County, No. 96-2520 (W.D. Tenn.)] in which the federal judge found Shelby County jail conditions in violation of inmates’ constitutional rights and the county failed to ameliorate the deficiencies.

On December 22, 2000, the Court issued an Opinion Finding Defendants in Contempt of Court for failing to implement specific steps ordered by Judge Turner in his orders of November 12, 1997, and November 24, 1999, to correct the unconstitutional conditions at the Shelby County Jail (“the Jail”).1 Following the finding of contempt, Defendants created a new remedial scheme that was effectively adopted by the Court as the remedial plan to correct the unconstitutional conditions at the Jail. The Court held hearings in this case on April 15, 2005, and on April 19, 2005, to determine whether Defendants should no longer be held in contempt of Court.2

The long history of unconstitutional conditions at the Jail during the period between 1987 and 2001 was conceded by the Defendants. The following quote from the report of Defendants’ expert, Dr. Jeffrey A. Schwartz, summarizes the conditions that were present at the Jail:

Prior to 2001, the Shelby County Jail had a twenty year history of abysmal leadership, mismanagement, nepotism [384 F.Supp.2d 1171] and cronyism, low hiring standards and poor personnel practices, lack of staff training and other resources and a profound lack of concern, support or accountability from both the Sheriff’s Office and the rest of the Shelby County government. These factors produced an overcrowded jail that was dangerous for inmates and staff alike, a jail in which the living units were largely controlled by gangs and in which assaults, rapes, stabbings, escapes and suicides were relatively commonplace events. The jail was filthy and in poor repair; staff were unprofessional with inmates and with each other and there was a well-established pattern of excessive force. Food service, medical and mental health services were deplorable and other services such as inmate classification and inmate programming were dysfunctional or simply lacking. The rest of the Shelby County Sheriff’s Office had metaphorically disinherited the jail and its staff, routinely refusing to recognize them as part of the same organization. The jail had not been certified by the Tennessee Corrections Institute (TCI) for many years and it is difficult to imagine how the jail’s image in the community could have been much worse.

In 2002, Story appealed his conviction to the Tennessee Court of Appeals, which upheld the trial court’s decision while at the same time admitting that the trial court made a number of “errors.”

The prosecution had accused Story of attempting to sell the marijuana from a blue Cadillac which Story in November 2003 attempted to demonstrate was impounded at the time.  In 2004, Story submitted a post-conviction appeal which was adjudicated negatively by Judge Chris Craft of Division VIII of the Shelby County Criminal Justice Center.

Recent prosecutorial misconduct has been reported in the 30th Judicial District, with the current District Attorney General, Amy Weirich, receiving a private reprimand in March 2017 for her conduct in the nationally-publicized Noura Jackson case.

As a whole, as The Post & Email has reported over the last 9+ years, the state of Tennessee permits judges and prosecutors to wield virtually unchecked authority, as evidenced by judges’ hand-picking of the grand jury foreman and reappointing him or her for consecutive terms and at times, decades.  Moreover, a set of 1984 laws designed to reorganize the county criminal courts into district courts was quietly ignored and apparently never formally challenged.

Shelby County admits that its judges “hire” the grand jury foreman. Shelby County judges additionally hand-pick a “grand jury foreman pro tempore,” adding yet another administrative layer to what is expected to be a neutral body of the county’s citizens serving to review evidence against a fellow citizen.

In turn, Tennessee judges have insulated the grand jury foreman from accusations of wrongdoing.

Craft, a former deputy prosecutor for the 30th Judicial District, has presided over all attempts on Story’s part to present exculpatory evidence since his conviction. The same held true on Monday, February 11, 2019, when Story attended a hearing he requested given that yet more documentary evidence of his innocence surfaced last fall.

Story presented that evidence to the court, along with a Writ of Coram Nobis, in late October, and, according to Story and another eyewitness, a clerk indicated that the document was handed to Craft during the proceeding after he claimed not to have seen it. 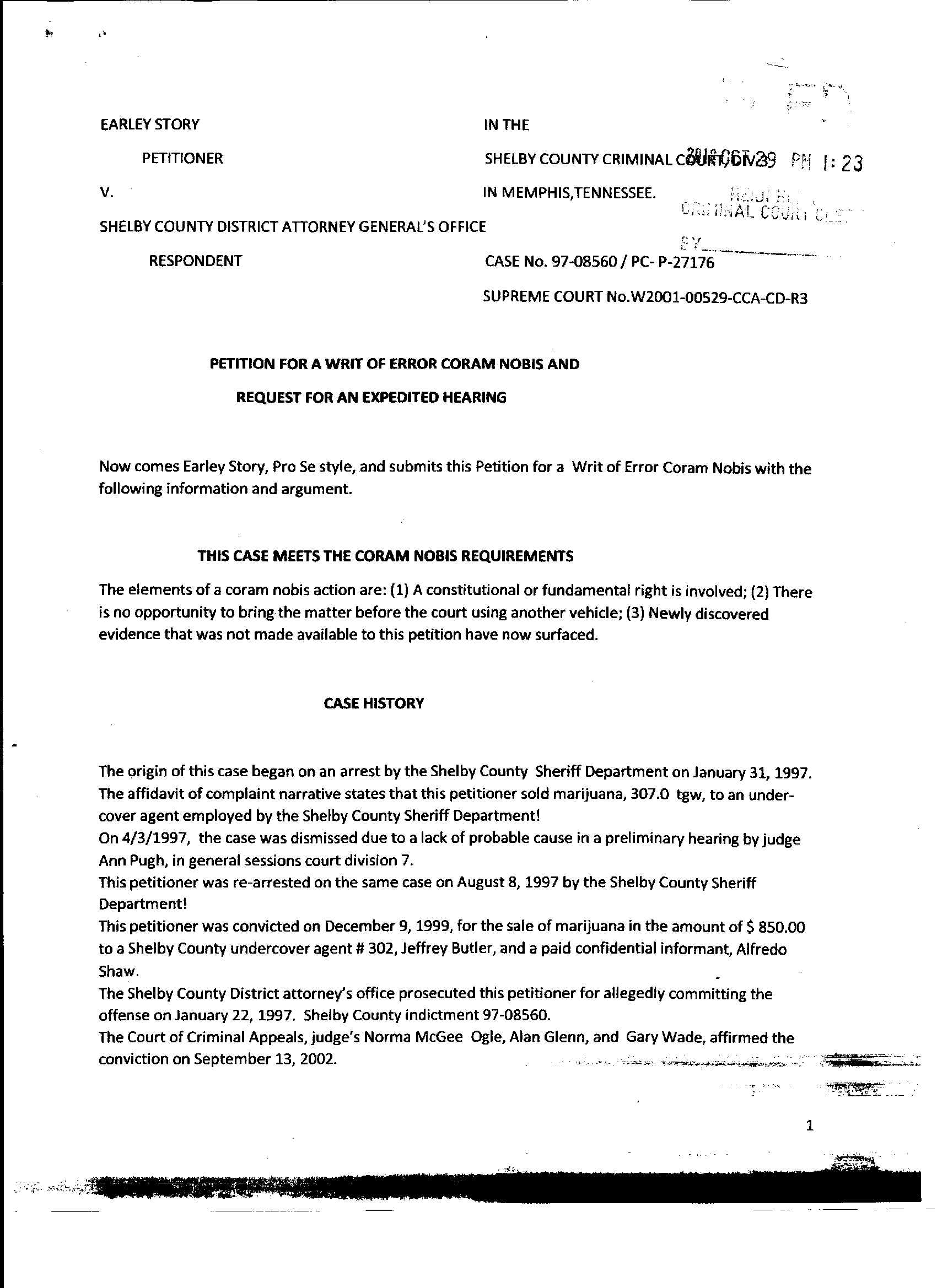 The evidence, withheld from Story for nearly 22 years, is a transaction log maintained by the SCSO of the confidential informant’s engagements in undercover drug operations between May 1992 and May 1998 for the benefit of law enforcement.  The date of January 22, 1997 appears nowhere on the log. 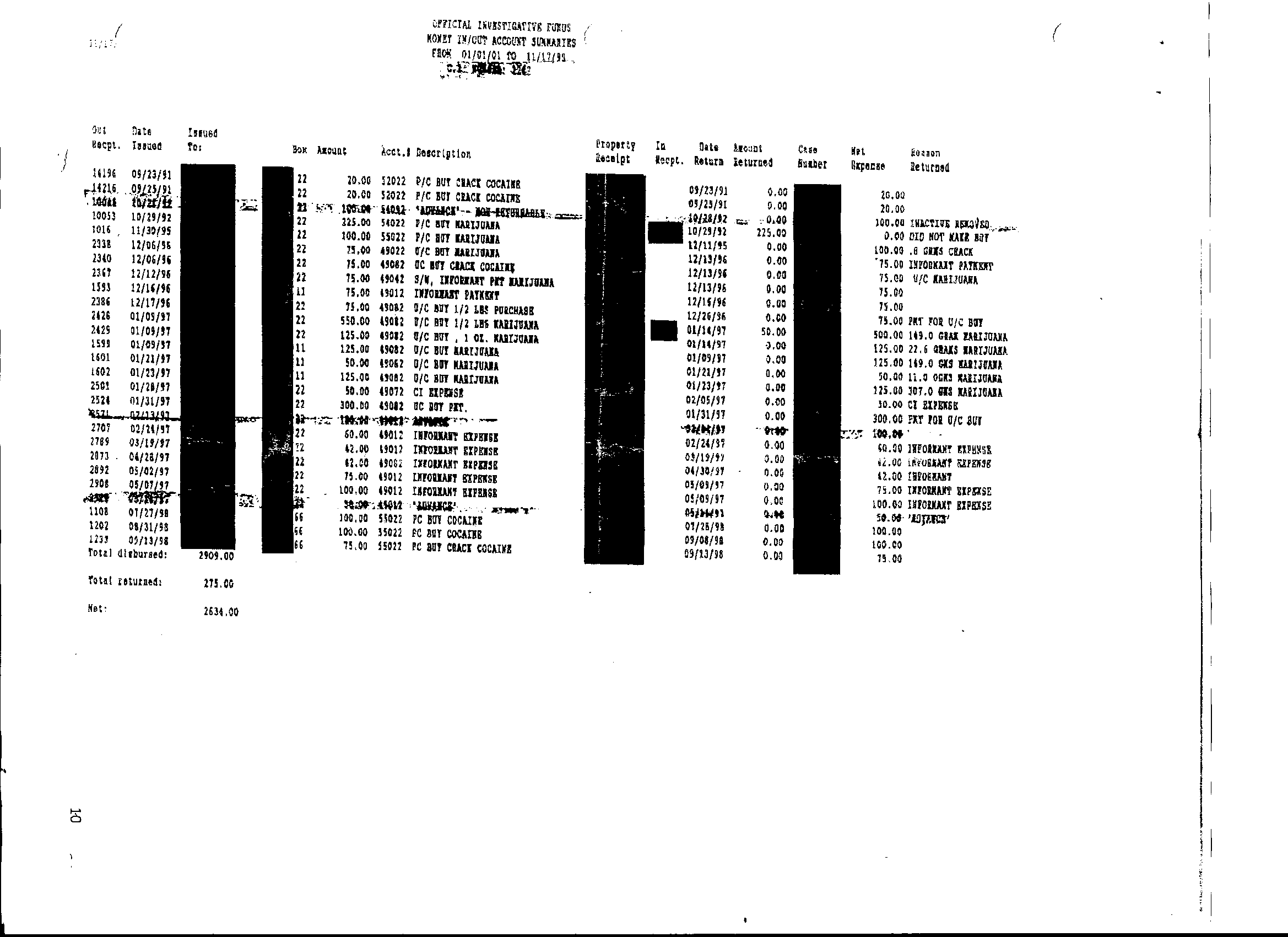 The informant, Alfredo Shaw, testified at Story’s trial as well as at that of Tony Carruthers, the death-row inmate whose federal public defender requested the documentation.

On Tuesday, Story told us:

On 11/7/2003, I presented the evidence concerning the impounded Blue Cadillac.  Craft refused to rule on the new evidence and gave another court date for 1/2/2004. I then submitted a petition to request the court to overturn the conviction!  On 1/2/2004, Craft began purposely hostile and trying to provoke me into legal arguments that I could not promptly answer and when ever I would began to speak, he would speak before or at the exact time of my response to him. He would then say that I was interrupting him. He was doing this continually. I started to just stop and walk out the court room.  He did the same scenario one more time and charged me with contempt of court and sentenced me immediately to 10 days in the Shelby County jail. On the contempt form the judge writes, “The defendant, representing himself, was repeatedly warned not to interrupt the court, but continued numerous times, was given 10 days suspended pending good behavior, but nevertheless continued to interrupt the court, disrupting the orderly proceeding.”

On 6/1/2004, Judge Craft denied my petition for relief. The same day he asked me would I appeal his decision and that he would appoint me counsel. I knew that he did not mean it, but I asked for counsel. They gave me the form to apply for representation due to not being able to afford counsel. Judge Craft signed the form and went no further!

The appellate court acknowledged that the trial court’s failure to hold a hearing to assess Story for indigency was one of its “errors.”  Judge Norma McGee Ogle additionally wrote, in response to Story’s objection to the jury having been provided transcripts of tapes rather than the recordings themselves, “The transcript of the January 22, 1997, transaction did not attribute any speech to the appellant.”

“We note that the appellant is correct that, upon the admission of the transcripts, the better practice was for the trial court to instruct the jury that the audio tapes themselves were the evidence to be considered, not the transcripts.10,” Ogle opined.

Story’s comments to us on Tuesday were accompanied by the following document from 2003: 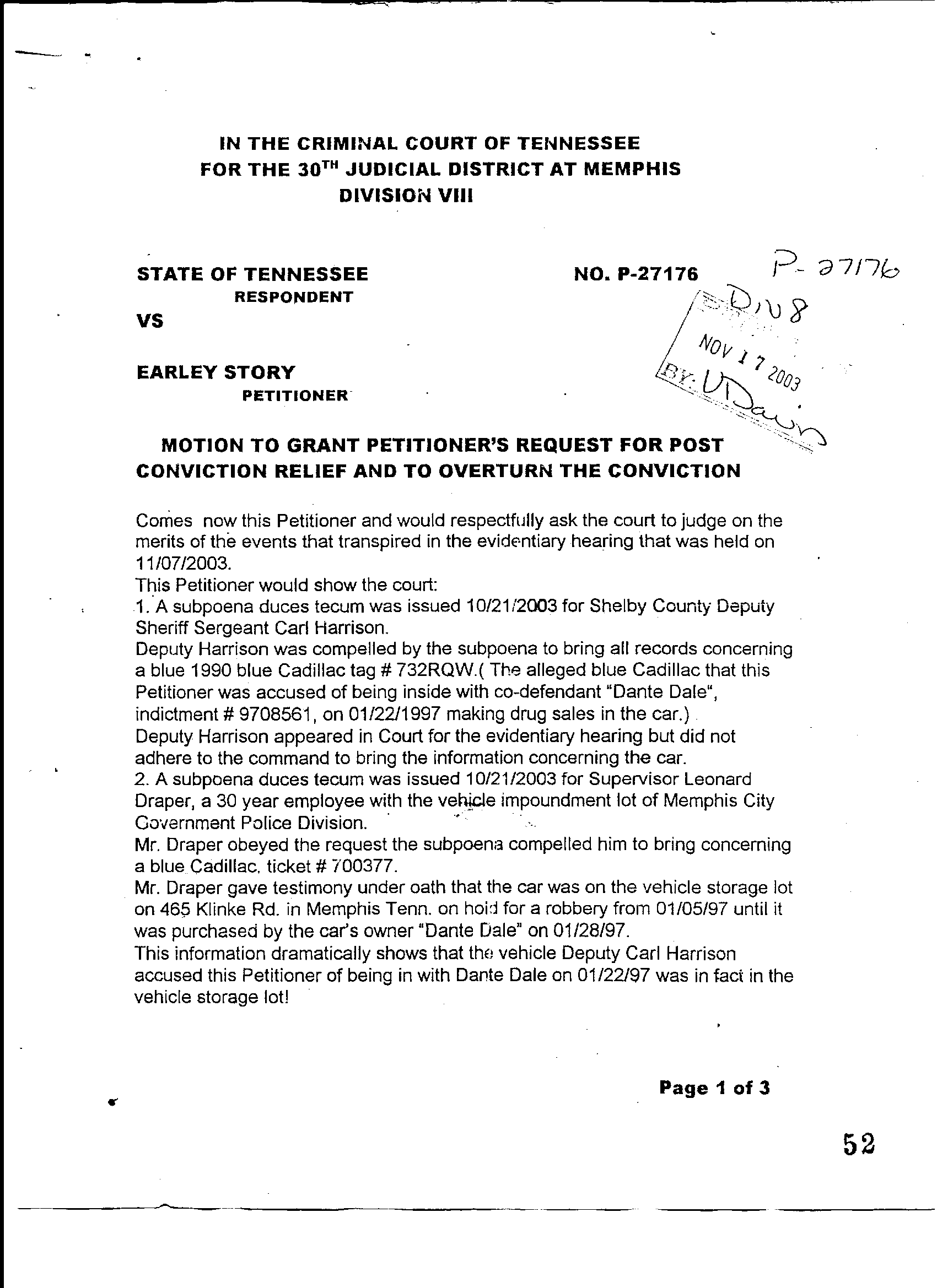 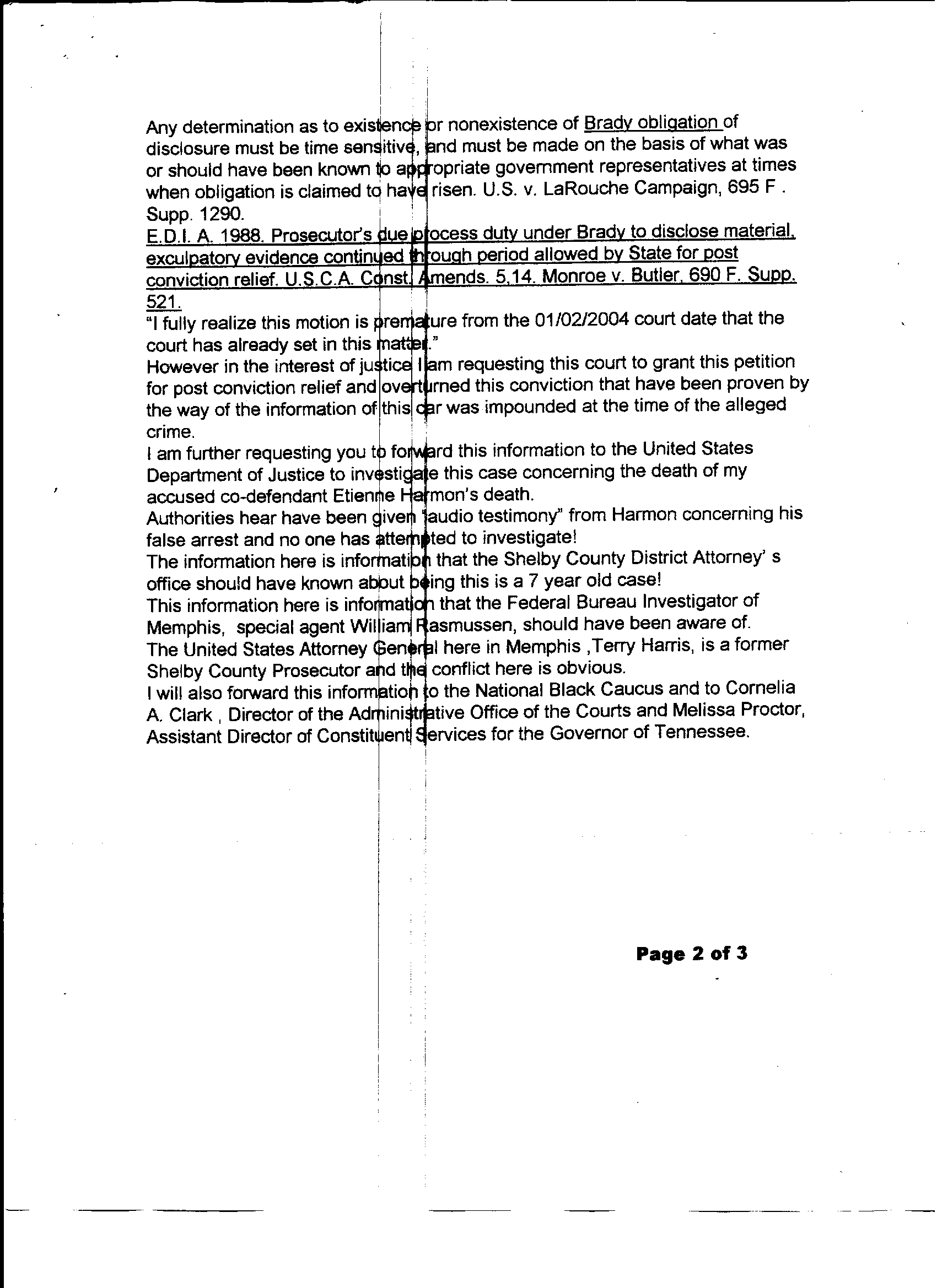 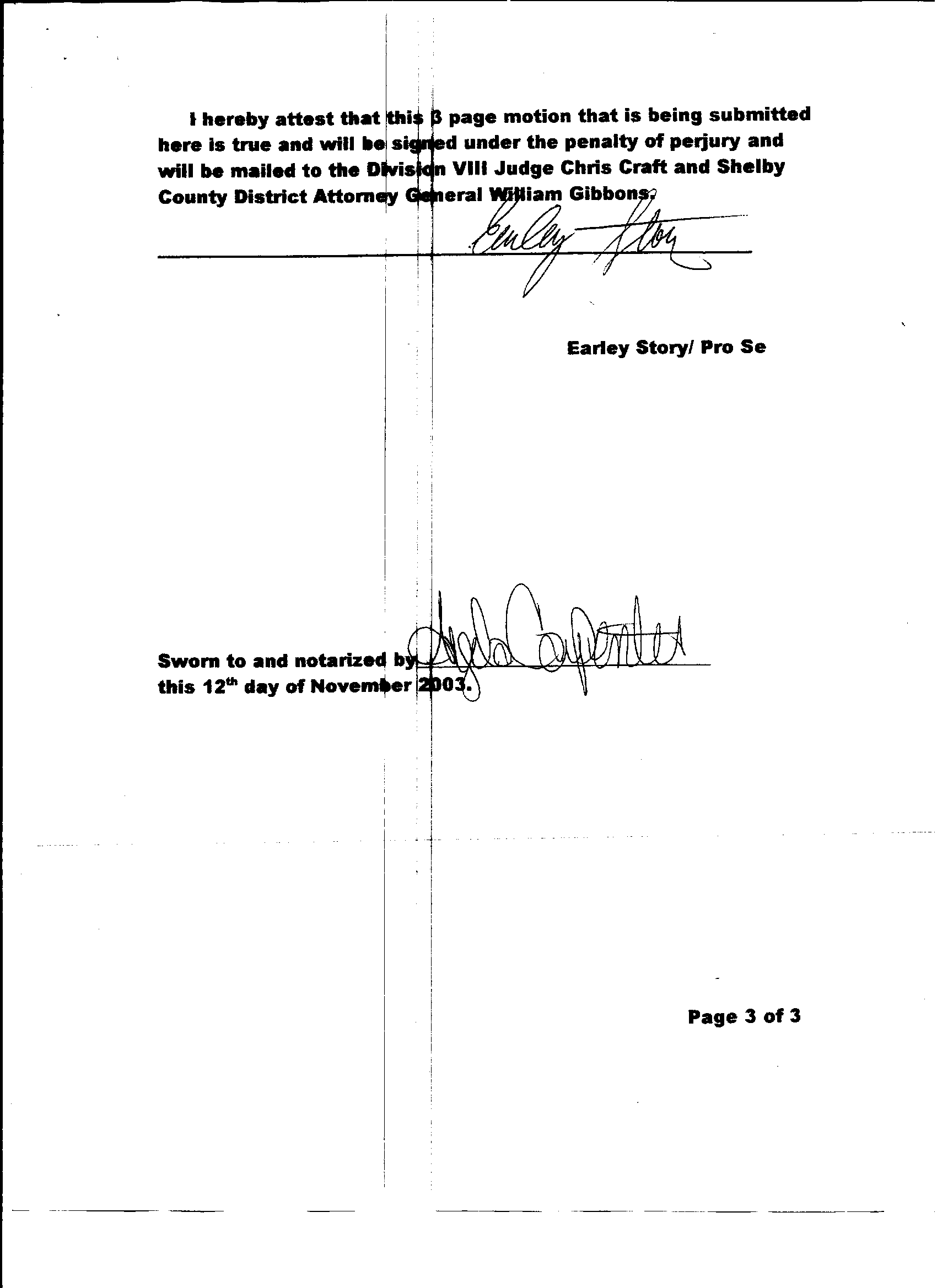 As Story reported, Craft ordered Story to spend ten days in jail for “contempt of court” for allegedly “interrupting” him during a 2004 proceeding, a threat he repeated on Monday. 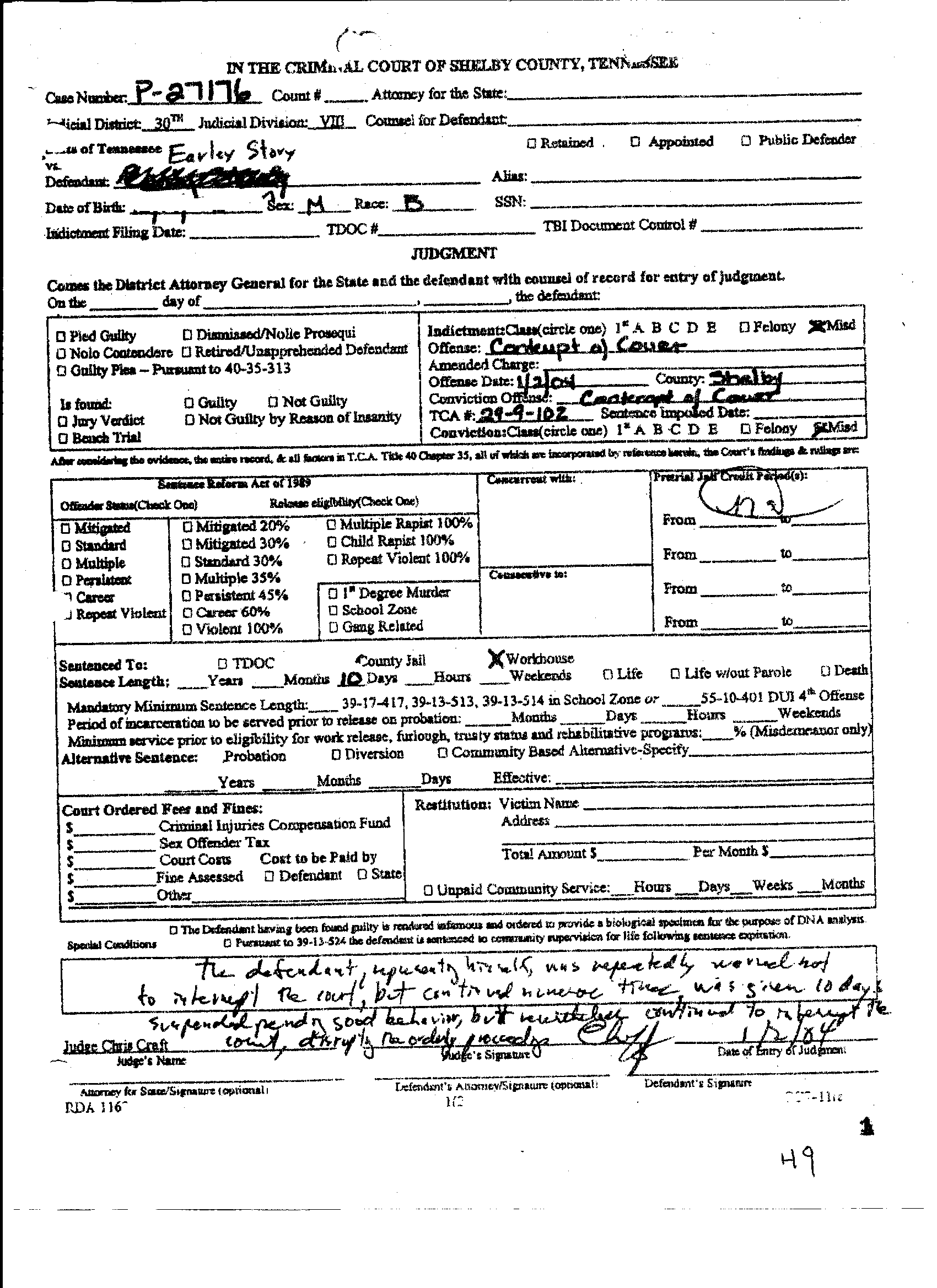 In Monday’s hearing, Craft indicated that he will again be presiding at the next hearing on Story’s Writ on March 4.  On Thursday, Story sent by email a voluminous document package to the Board of Professional Responsibility (BOPR) with a request that Craft recuse himself.  In an email Friday morning, Story indicated he will also send the same package to the Tennessee Board of Judicial Conduct.

On Monday, National Police Defense Foundation (NPDF) founder Joseph Occhipinti told The Post & Email that his organization supports Story’s efforts to overturn his conviction based on the evidence Story has recently presented as well as that which dates back to May 1997, when the NPDF first investigated Story’s claims.  At the time, Occhipinti said, a Memphis FBI agent indicated that he, too, suspected that Story was framed.

On Thursday Occhipinti told us:

What we want is for people to call into the governors office asking for an independent investigation to determine the set up. Also, any one can pledge a tax-deductible donation by calling our toll free number 888 SAFE COP or email me at my address.