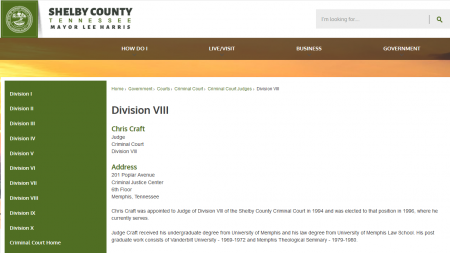 (Feb. 12, 2019) — On Monday, The Post & Email reported two new developments in the case of former Shelby County, tn Sheriff’s Office (SCSO) Sergeant Earley Story, who was accused and ultimately convicted in 1999 of selling marijuana to an undercover agent’s confidential informant, an allegation Story denies to this day and is attempting to have removed from his record.

Our exclusive report included a statement from Joe Occhipinti, founder in 1995 of the National Police Defense Foundation (NPDF), who Story approached after he was arrested and who, through our coverage and new evidence Story has presented demonstrating a major defect in the case against him, stated that the organization continues to support Story’s quest for vindication.

Story is convinced he was retaliated against for having blown the whistle to the NAACP and FBI on abuse occurring within the Shelby County jail, whose draconian conditions have been documented in 2000 by the U.S. Justice Department after it performed an inspection and laid out corrective measures in keeping with a federal judge’s order.

In 2001, Slate published a harrowing article on the jail with the subheading, “If you ever go to Memphis, you better walk right. A chilling report on one of the worst places in America.”

Story had directed the new documentation, which he acquired from a death-row inmate who acquired it from his attorney and ultimately the SCSO, along with a Writ of Coram Nobis, to the Shelby County Criminal Court, Division III, where his 1999 trial was held.   Expecting the case to be taken up again there, Story was surprised when he received a letter stating that a hearing on February 11, 2019 had been assigned to Division VIII under Judge Chris Craft, a former 30th Judicial District (Memphis) prosecutor.

The letter included the statement that if he failed to appear, a warrant for his arrest would be issued.  In yesterday’s report, The Post & Email stated that as of Friday, Story told us he had not received a corrected letter as court clerk Sandra had promised would be generated in a telephone inquiry we made late last month. In Monday’s interview, Story corrected the record to say that he received a second letter, absent the wording in question, on Friday afternoon, the last business day before the hearing.

Craft was the judge who upheld his conviction in 2003 after he filed a post-conviction appeal, Story informed us.

The documentation Story presented to the court shows that confidential informant Alfredo Shaw, who had a criminal history of which the SCSO was aware, did not transact any drug operations on January 22, 1997, the day on which SCSO deputies alleged Story attempted to sell the marijuana to Shaw.

Two additional dates Story was alleged to have transacted drug deals were dismissed by the trial jury as shown by a record of Story’s 2002 appeal. The summary includes the admission by the appellate court that the trial court committed errors, while deeming the errors “harmless.”

Two other men were accused along with Story, one a fellow SCSO officer and the other a 17-year-old who mysteriously died in November 1998.

On February 5, 2019, Story sent a Motion for Default Judgment to the court “due to the failure of the respondent to timely file an answer to this petitioners writ of error coram nobis,which was filed on October 29,2018.” [sic]

“I want to win by default if I can,” Story explained of the motion.  “With me being a non-lawyer, that’s the rule that I read, because they did not answer my October 29th Writ.” 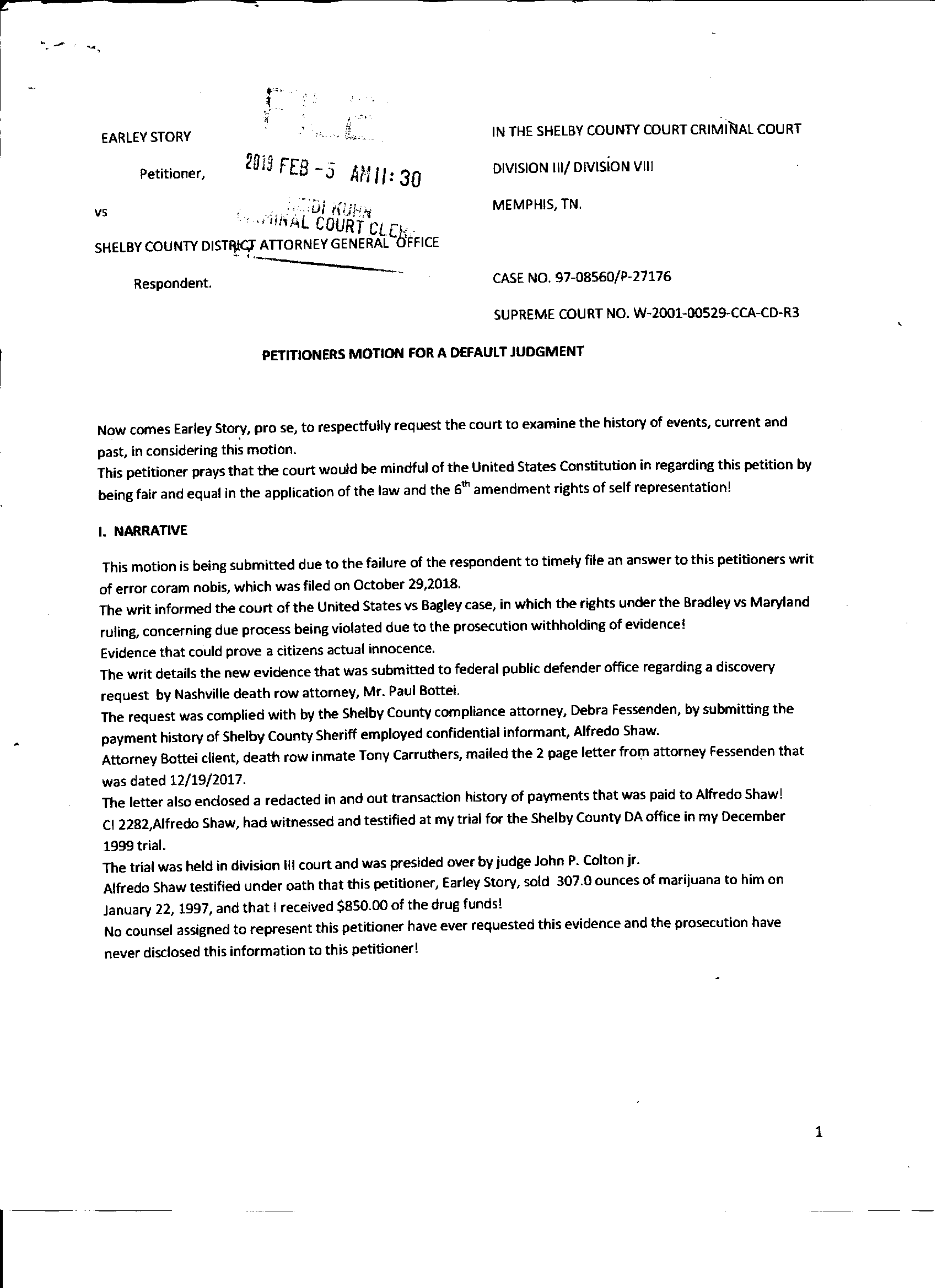 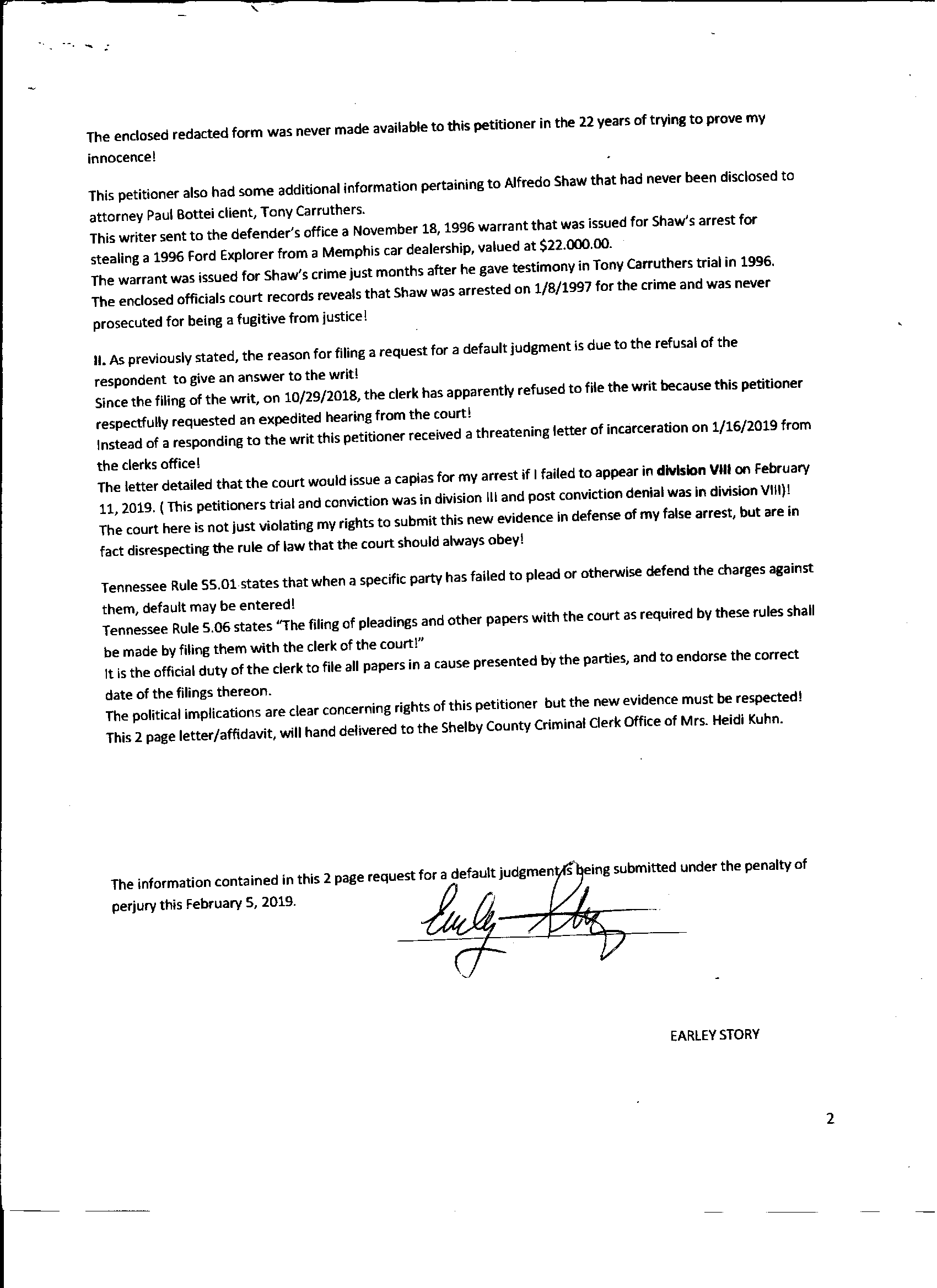 Of Monday’s hearing, Story said Craft displayed hostility toward him, an impression seconded by another eyewitness who contacted us afterward.  Craft claimed to not have reviewed the documentation Story submitted to the court in October, Story told us.

“I can’t rule on your default motion because I haven’t seen it,” Story quoted Craft as having said of the motion.  “He was kind-of deriding me,” Story said.  “I held my peace, but right then, a court clerk picked up the motion and handed it to him,” Story continued.

Both Story and the second eyewitness reported that Craft threatened to hold Story in contempt of court for allegedly “interrupting” him.  “He’s done that before,” Story said, “and he’s done it the same way each time.  He talks, and when he talks, he takes a little pause; he looks like he’s waiting for me to speak, and then when I say something, he says, ‘You interrupted me.’  He did that before and put me in jail for ten days. So he tried to do the same thing.  He was getting on the guy who came before me for not talking loud enough, so I wanted to make sure I talked clear into the mike.  He kept asking me over and over about me representing myself; it was already on my paperwork that I was representing myself.  So I said, ‘No,’ and he said I interrupted him.”

The eyewitness, who took notes during the hearing, reported:

The courtroom, on the 6th floor of 201 Poplar, was full of about 30 petitioners / defendants.

Judge Chris Craft was about ten minutes late and quickly ran through his docket.   Earley, who was accompanied by his wife and son, was called to the mic at around 09:30

Earley Story went back to his seat in the back row and sat down.

The judge called Earley Story back to the microphone about five minutes later, after dealing with a couple more cases and scheduling them for later.

The judge said there was no need for Earley to yell.  When you came to the microphone you started yelling.   The judge said that Earley is not supposed to interrupt the judge, and he is in a court of law and must behave himself.    Did you file a petition of Error Corum Nobis?

“Do you have an attorney, or are you appearing pro se, or do you need time to hire an attorney”.

Early Story inquired who was the prosecutor assigned to the case, to which the judge replied that no-one was on it.  Earley replied that the writ had been filed October 29th and should have had a response.  The judge said that the write did not ask a question so no response was due.  “Absolutely you haven’t had a response”. The judge said he wanted to make sure that Earley would appear and that Earley has asked for a hearing, not a State response.

The judge asked if Earley wanted a hearing on March 4th or a state response and Earey replied he wanted the hearing and was told to sit down.

Early was talking quite loudly but I would not describe it as shouting.   The judge’s tone sounded hectoring at times.

I am not qualified for shorthand so only the parts in quotes are verbatim.   The rest are from the notes I took during the session.

During our interview, Story expressed gratitude for Occhipinti’s renewed support and The Post & Email’s recent reportage on his 22+-year quest to clear his name.

Craft set a subsequent hearing on the case for March 4.

Does the Judge Have an Agenda in this Case? added on Tuesday, February 12, 2019