IN HIS QUEST FOR JUSTICE

(Feb. 11, 2019) — On Monday morning, Shelby County, TN resident Earley Story, who maintains he was falsely charged in 1997 for allegedly selling marijuana to an undercover agent, had a hearing in Division VIII of the Shelby County Criminal Justice Center in Memphis with the purpose of presenting exculpatory evidence not made available to him more than two decades ago.

Story was a sergeant for the Shelby County Sheriff’s Office (SCSO) working in the Shelby County jail when he was accused, along with two other individuals who he says are also innocent, and eventually found guilty.  As reported in The Commercial Appeal at the time, one of the three was a juvenile who Story told us in a November 2018 interview later turned up dead.

After conditions in the jail devolved into what Story saw as dangerous and illegal, he reported his observations to the NAACP and Memphis Bureau of the FBI, a fact confirmed Monday morning to this writer by the founder of a national organization established to defend police officers against false charges. Story believes the allegation against him arose out of retaliation on the part of the SCSO.

Story’s accounts of the jail conditions were corroborated in 2000 by the U.S. Justice Department, which identified a significant number of deficiencies and dangers within the facility to then-Shelby County Mayor Jim Rout after a federal judge ruled aspects of its operation unconstitutional.

Initially, Story was exonerated of the charge by Judge Ann Pugh, who ruled in April 1997 that there was insufficient evidence to prosecute him.  However, he was shortly thereafter rearrested for the same alleged crime, tried and convicted by a jury in December 1999.  As a result of the arrest at age 44, Story was terminated from his job and, now 65, was unable to find full-time work as a result of his felony conviction.

As The Post & Email reported, Story has been attempting to clear his name for 22 years but has found justice elusive in Shelby County.

After Story appealed the verdict, Judge Chris Craft, a former prosecutor, was assigned to hear the case, ultimately upholding the trial court’s decision. 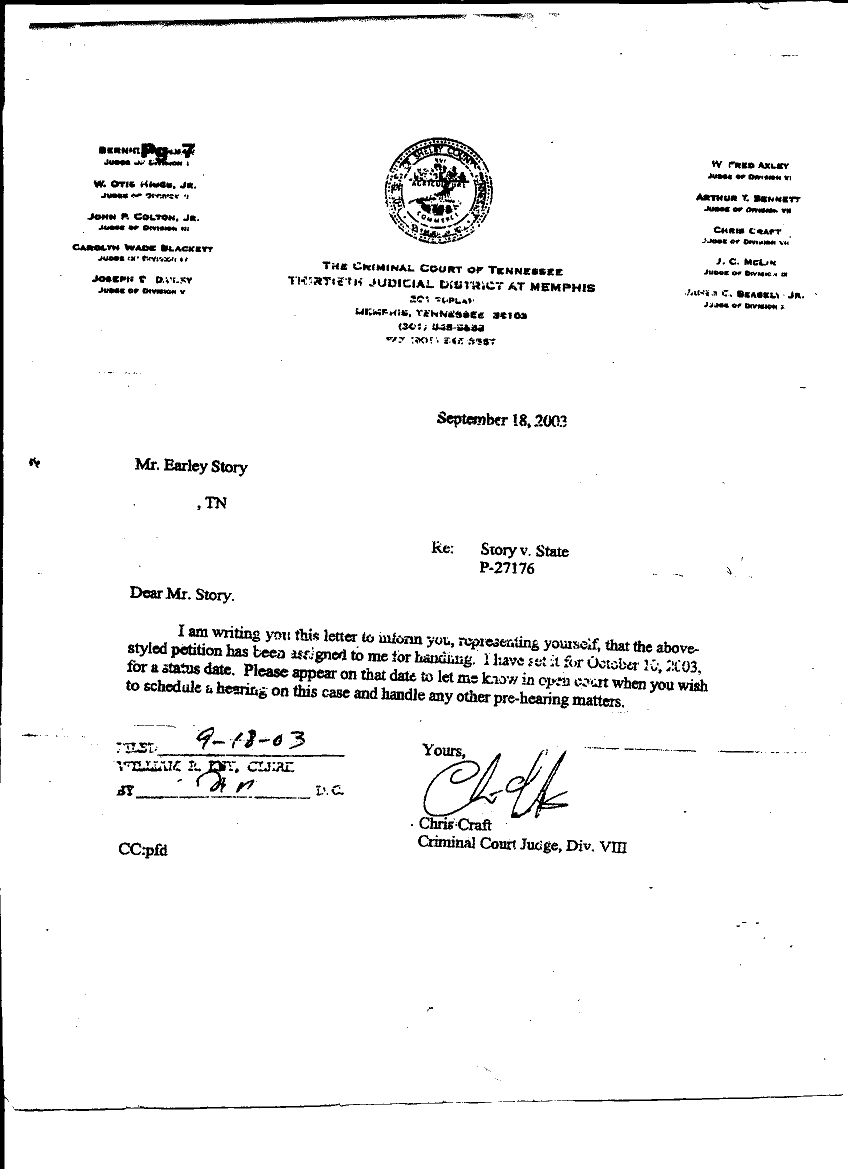 New information presented to Story last fall by death-row inmate Tony Carruthers prompted Story to file a Writ of Coram Nobis with Division III of the Shelby County Criminal Court in order for him to present it in the hope of obtaining a judgment overturning his conviction.  The recently-unearthed evidence came in the form of a letter and enclosure from the SCSO to Carruthers’s federal public defender demonstrating that an undercover cooperating person, Alfredo Shaw, did not transact any business on January 22, 1997, the date Story was alleged to have attempted to sell him marijuana.

Two previous dates that month on which Story was also initially alleged to have sold drugs were dismissed by the jury.  Shaw testified at his trial, Story said.

After sending his request with the court, Story received a letter threatening him with arrest were he to fail to appear for Monday’s hearing. A legal professional with whom Story exchanged emails but who does not represent him indicated that to him, it appeared the threat to arrest Story, absent an active criminal case against him, was “illegal.”

An inquiry made to the Shelby County Criminal Court received the response that the threat of arrest was part of a form letter which the clerk neglected to remove before mailing.  However, as of Friday, Story informed The Post & Email that he never received the corrected letter which court clerk Sandra had said would be forthcoming.

As of press time, we were unable to reach Story to learn the outcome of this morning’s hearing.  However, after receiving notification of the assignment to Craft, Story immediately questioned why the same jurist who upheld his conviction in 2003 would hear his request to present new evidence.

A video interview conducted last week by citizen journalist Nolan Fergus features Story explaining how he came to be falsely charged, prosecuted twice, and convicted of a felony 20 years ago which has marred his life and reputation ever since. 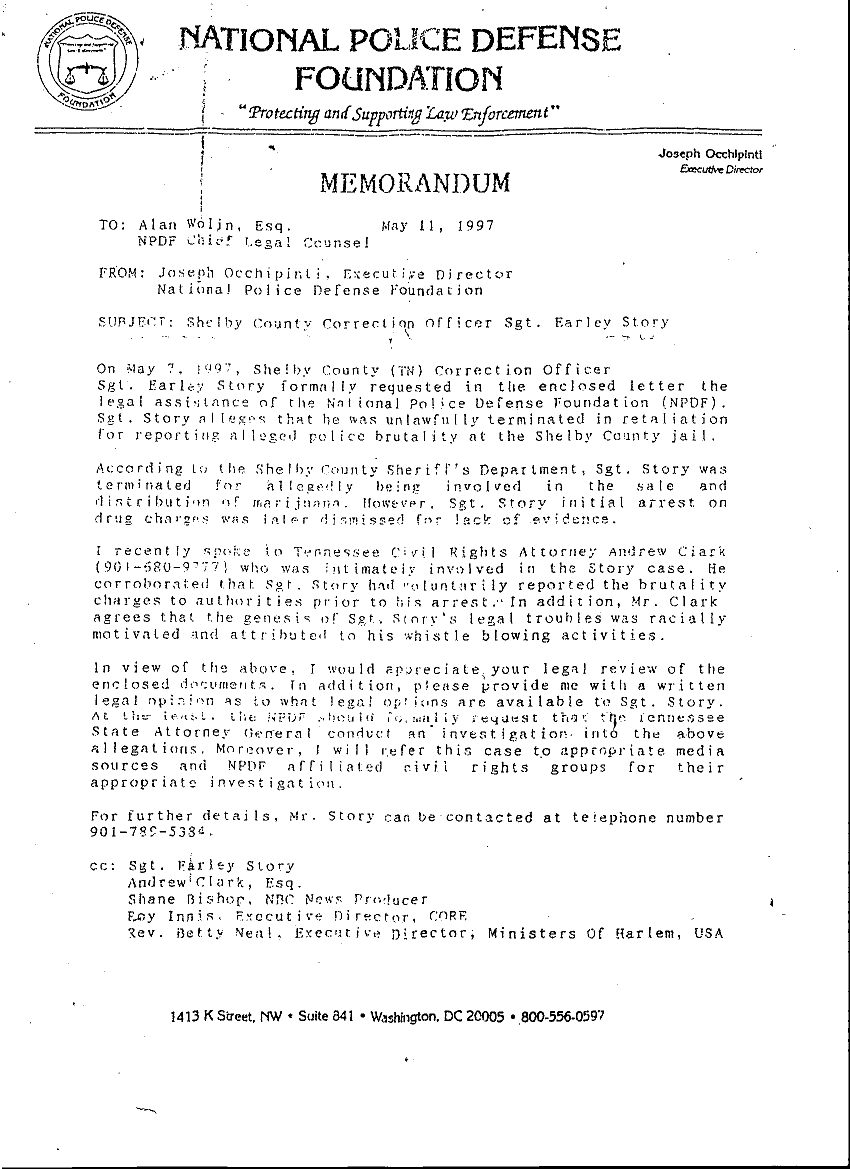 On Monday morning, The Post & Email spoke with Occhipinti, who told us, “The National Police Defense Foundation, which is a congressionally-recognized police advocacy group, was asked to investigate the case of Earley Story in the late 1990s.  As a whistleblower, he reported alleged misconduct at the jail.  We were convinced, based upon the evidence we saw, that in fact he had a credible case where he was targeted, prosecuted and convicted for attempting to expose corruption in Shelby County.”

One of the factors we looked at was the fact that he actually reported to the FBI the allegations of official corruption. I have a recollection of talking to an FBI agent who told me that he believed in Story’s case and allegations, that he was railroaded, and it didn’t surprise him based upon the allegations.  My recollection is that I asked him why the FBI couldn’t open up an investigation, and he later said something to the effect that “it didn’t fall under their jurisdiction.”

That didn’t make any sense, because the FBI clearly has jurisdiction to investigate alleged corruption.  Moreover, based on my experience as a federal agent and representing, many times, falsely-accused officers, I know that federal authorities are sometimes a little apprehensive to prosecute a district attorney or an official in that jurisdiction where they work because they have to rely upon them to do everyday police work.

So I think it was a case that was not politically beneficial to the FBI at that time and that’s why they kind-of said, ‘Pursue your appeal process,’ hoping that truth and justice will prevail.  When someone is guilty of a crime, they accept it and move on, but this is an officer who for 22 years has been fighting the system for complete vindication.  That is the signs, in my opinion, of an innocent man who was falsely accused and is attempting to prove his innocence.

He concluded with, “Based on your story and some of the new revelations, we will continue to support this particular former officer, Earley Story.”