REQUESTS CESSATION OF FEDERAL MONIES TO DEPARTMENT OF CORRECTION 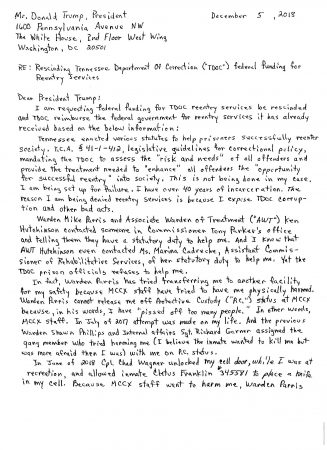 Harmer’s reason for the request is that he is not being provided such reentry services, he said. Currently, he is held in protective custody (PC) at the Morgan County Correctional Complex (MCCX) in Wartburg, TN, where he is serving a 25-year sentence without possibility of parole, with a tentative release date of early 2020.

As for why he believes the proposed federal move necessary, Harmer wrote, “This is not being done in my case. I am being set up for failure. I have over 40 years of incarceration. The reason I am being denied reentry services is because I expose TDOC corruption and other bad acts.”

A voluminous writer and documentarian, Harmer has written The Post & Email and other media outlets hundreds of letters over the last 2+ years, with most containing TDOC documents, grievances, responses to grievances, memos and copies of letters he has written to government authorities reporting alleged abuses.

Other inmates and some of their relatives have corroborated Harmer’s claims as to inappropriate and/or abusive physical contact on the part of correction officers against inmates; lack of proper medical care, particularly for those with mental-health issues; and dangerous conditions even within the PC unit at Morgan County, including the presence of gang members.

Inmates at other Tennessee facilities have reported that gang members intend to kill them.

Harmer was placed in protective custody on or about August 1, 2017 after a known gang member was allowed to enter his cell with a knife, Harmer reported. He has since detailed alleged observations including lax security measures allowing the entry of contraband into the prison and specifically the PC unit; violations of health codes by the prison’s food supplier, Aramark, as well as food shortages; and a cell so cold in the winter that he is forced to wear as many layers of clothing as he owns.

Given that Harmer’s remaining prison time is relatively short, he has maintained an expectation that he would receive reentry, or “transition,” services to assist him in adjusting to life outside of prison upon his release.  However, Harmer has said on numerous occasions that such services have been withheld, partially because of his confinement in the PC unit for an unusually lengthy period of time.

TDOC policies state that after an inmate is placed in PC, his situation must be reviewed frequently, beginning with every seven days, and that a relocation as soon as possible to general population is recommended.  “PC” status becomes necessary after an inmate has a credible fear of harm from another inmate or inmates, the policy states, and medical care, recreation and other services are mandated at the same level as that which inmates in the general population receive. Harmer reported to this writer that one such review was conducted over his nearly 17 months in protective custody and that it was done outside of his cell where other inmates could hear the conversation. 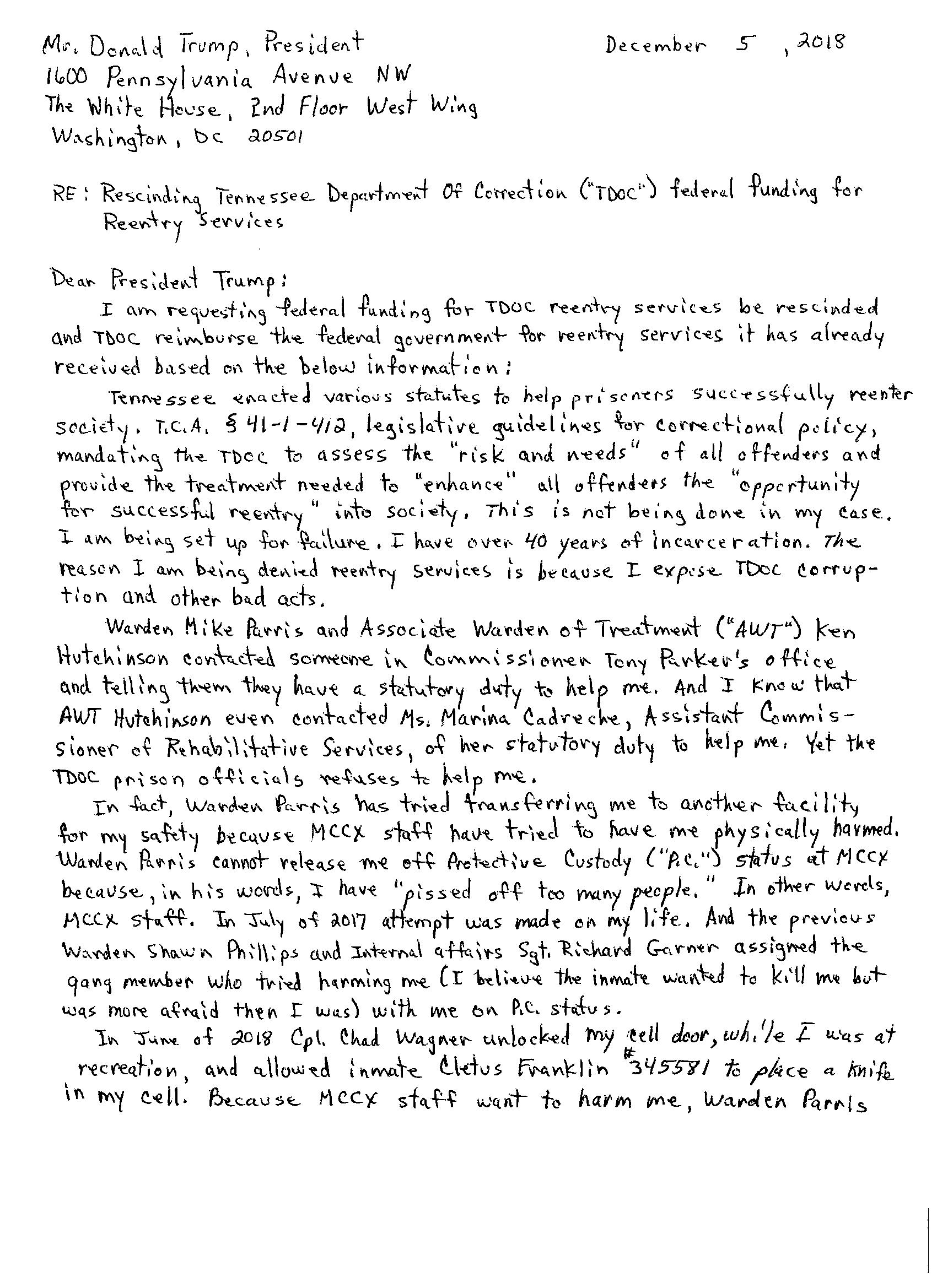 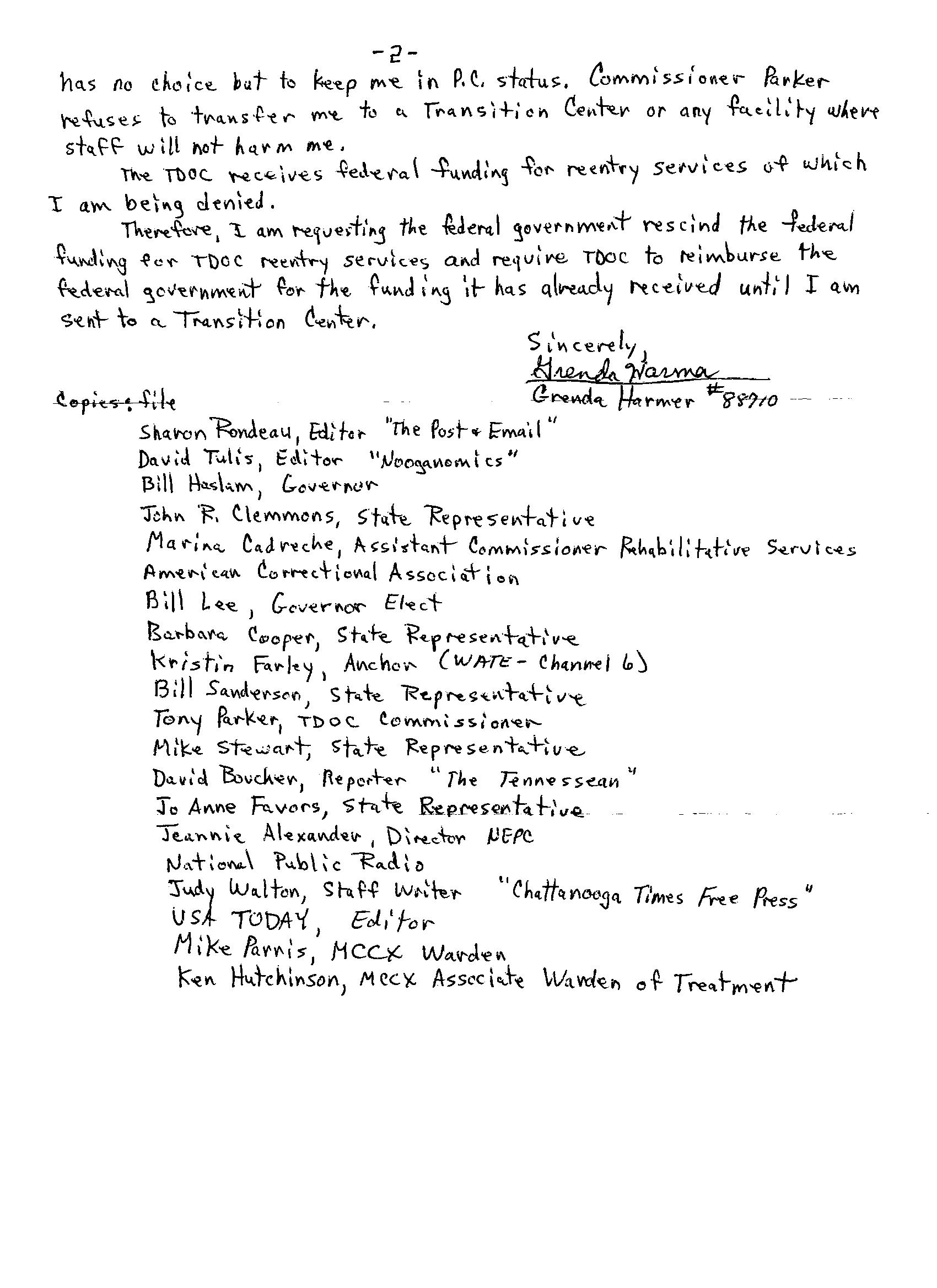