“ONCE AGAIN THEY ARE FREEZING ME OUT”

(Nov. 19, 2018) — A letter dated November 10, 2018 received on Monday from TDOC inmate Grenda Ray Harmer, #88710, indicates that for the second consecutive winter, there is little to no heat in his cell in the protective custody (PC) unit of the Morgan County Correctional Complex (MCCX).

Harmer first began reporting a lack of heat a year ago after he was moved to PC from general population the previous August. He described wearing multiple layers of clothing at all times in what he said were “freezing” temperatures.

“Once again they are freezing me out,” he began the letter. “Its down in the 20’s and my cell is very cold… The system they are using is decades old. It draws the outside air into the unit. Because its very cold the air being pumped from outside is cold…” [sic]

An assiduous writer, Harmer has reported alleged health-code violations by prison food-service contractor Aramark; dereliction of duty on the part of correction officers affecting safety and security in the PC unit; unchecked gang activity; the arbitrary withholding of inmates’ medications; inappropriate physical contact with inmates initiated by guards as a means of intimidation; and the introduction of contraband into the unit and prison as a whole, allegedly with the knowledge and consent of MCCX correction officers.

He has also reported occasions when he has observed those conditions to have improved, if only temporarily. On January 6, 2018, Harmer wrote a letter indicating that three days before, the heat to his cell was “turned on.”  “They are not happy about the negative articles,” Harmer wrote, referring to The Post & Email’s coverage of the issue based on his communications.

As evidenced by our daily statistics log, the State of Tennessee is a regular reader of our articles on prison abuse and corruption, particularly of articles containing Harmer’s reports.

After last winter’s reported lack of heat was resolved, Harmer claimed that other PC inmates said their cells, too, were without heat during the same time frame but that they had been reticent to report it to prison staff.  When contacted for comment by David Tulis of the “Nooganomics” radio show and namesake website, TDOC Communications Director Neysa Taylor said she found Harmer’s reports “erroneous and outright fictitious.”  “ 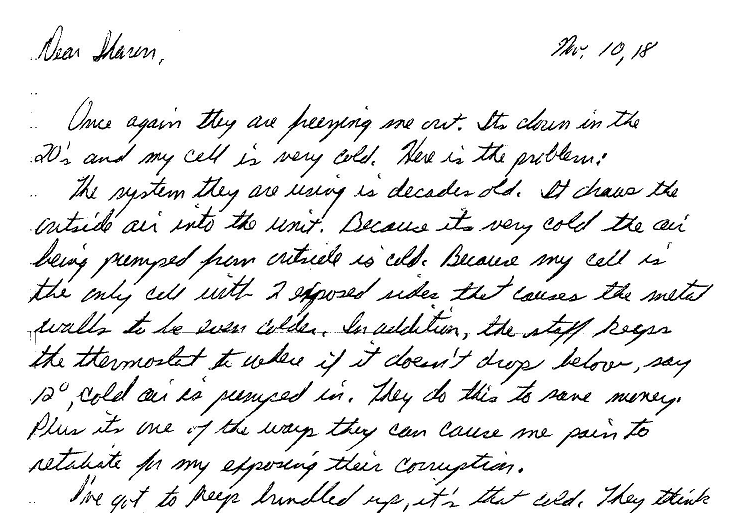