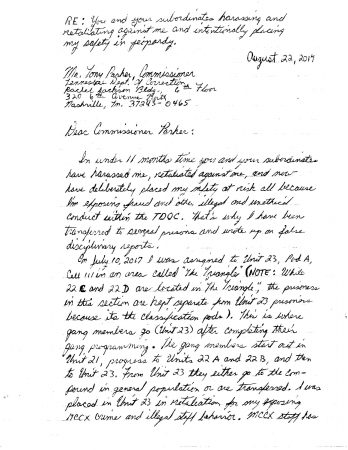 (Aug. 28, 2017) — The following copy of a letter addressed to Tennessee Department of Correction (TDOC) Commissioner Tony Parker was received by this writer on Monday and provides full details about a confrontation at the Morgan County Correctional Complex (MCCX) in Wartburg, TN on July 28, 2017 between an inmate in “general population” and a member of the “Crips” gang housed in an adjacent section of the prison.

As The Post & Email has reported, inmate Grenda Ray Harmer, #88710, and his cellmate at the time were confronted by the gang member after he was reportedly allowed out of his cell in violation of the Tier Management system utilized in all of Tennessee’s prisons. The gang member reportedly had a knife which he used to threaten the two men inside the cell and steal personal property.

Harmer, 64, physically responded to the intrusion and as a result, was placed in protective custody (PC) for his own protection. In a number of letters over the last month to this publication and other parties, he has related that he is currently unable to access legal materials and interact with other inmates and that he believes his situation was “orchestrated” with that intent.

Upon his arrival at MCCX on June 2, Harmer’s personal property was confiscated and to his knowledge, placed in storage. However, at the time he was told to sign a form acknowledging his receipt of all of his personal belongings. After he refused to sign, he said that the intake correction officers placed him in solitary confinement, threatened him, and generated two disciplinary reports which were unfounded. His grievances on that and other matters have remained unaddressed as evidenced by the letter below and other correspondence.

To protest the non-return of his property, which included family photos, hygiene items, a television set, and a pair of boots, Harmer commenced a hunger strike on June 5, during which he drank liquids but consumed no solid food.

As the month of June progressed, some of Harmer’s belongings were returned to him.

On July 5, he was found unresponsive in his cell just after having been relocated out of solitary confinement. Prison medical staff attempted to stabilize his blood pressure, which was found to be 70/36, but were reportedly unsuccessful.  They then sent him to the University of Tennessee Medical Center in Knoxville, where he remained for three days.

In a letter written shortly after the ordeal, Harmer said that he “almost died” and that had he not been moved into general population with a cellmate, he is certain he would have died.  Harmer has since related that prison staff have callously told him, “I could have let you die.”

His recovery has been marked with chest pains and frequent dizzy spells as well as a sprained right ankle which was re-injured during the confrontation with the Crips member.

Between July 2016 and June 2017, Harmer was moved three times within the state’s prison system: from TCIX to TTCC in July of last year; from TTCC to SCCF in April; and from SCCF to MCCX on June 2. Harmer believes that at a minimum, the latter two moves were effected out of retaliation for his exposure of policy violations and other forms of corruption, along with the treatment he has received since his arrival at MCCX.

Prior to receiving the letter mid-morning on Monday, this writer was a guest on the “Nooganomics” radio show hosted by David Tulis.  On his website, Tulis has published letters received from Harmer over the last month requesting government officials to take action on corruption and policy violations within the TDOC.

Note: The blacked-out area on page 4 was made by Harmer, while the blank areas on page 3 and in the “cc” field at the bottom of page 4 are a result of The Post & Email’s redaction of the names of non-public figures. 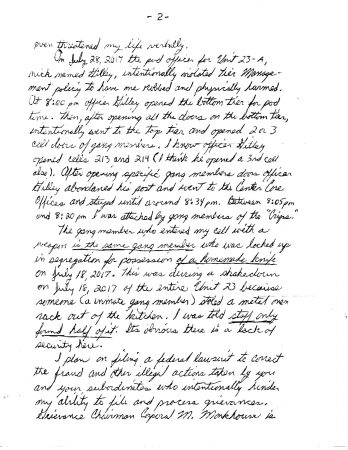 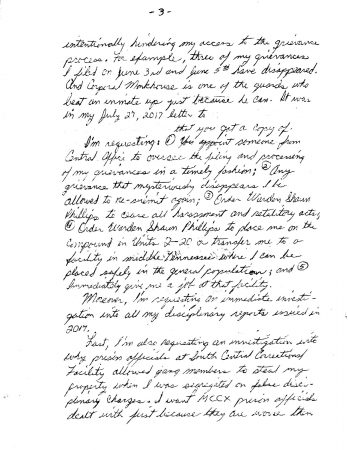 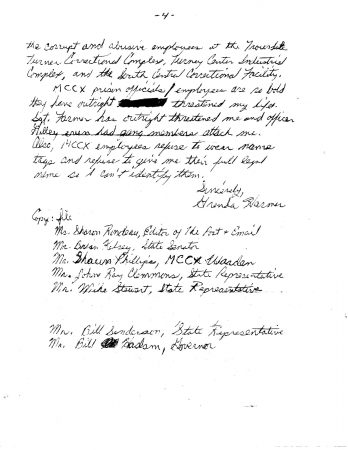 One Response to "MCCX Inmate Names Names in Gang-Member Confrontation"