“HERE IS SOME GOOD NEWS”

MCCX is one of 14 prisons within the Tennessee Department of Correction (TDOC) system.

Over the past several months, Harmer filed numerous complaints about cold food, receiving smaller portions than those which he alleged the general population receives, and foreign objects in his food.  He has been in protective custody (PC) since July 28, 2017, after a known gang member entered his cell with a knife and threatened both his cellmate and him with theft of property. Reflexively, Harmer “laid hands” on the gang member and was then considered, by TDOC policy, to be in danger.

In his most recently-dated letter, Harmer thanked The Post & Email as well as David Tulis, host of the “Nooganomics” radio show and owner of the website by the same name, for their reportage oF the food-service problems he said he observed.  Harmer was also pleased that five PC inmates are now employed so that they can earn money and receive “sentence credits.” 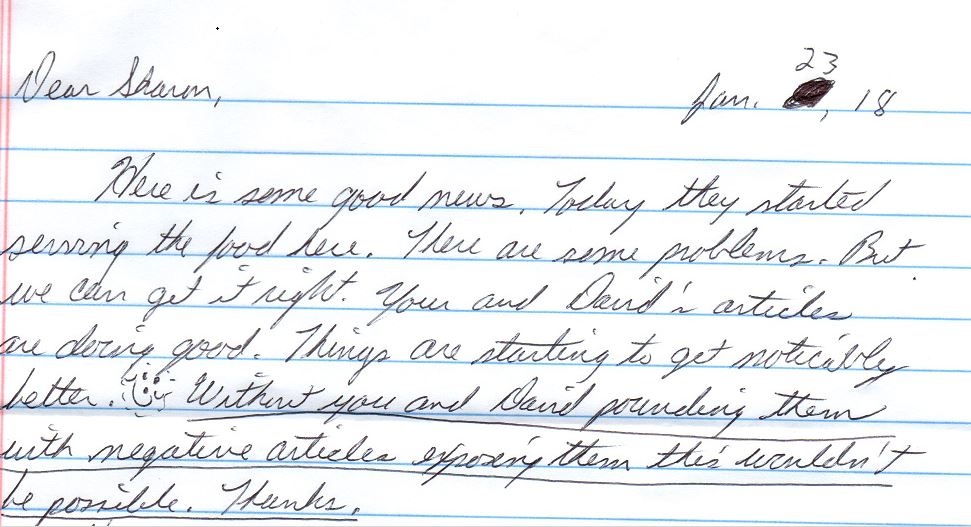 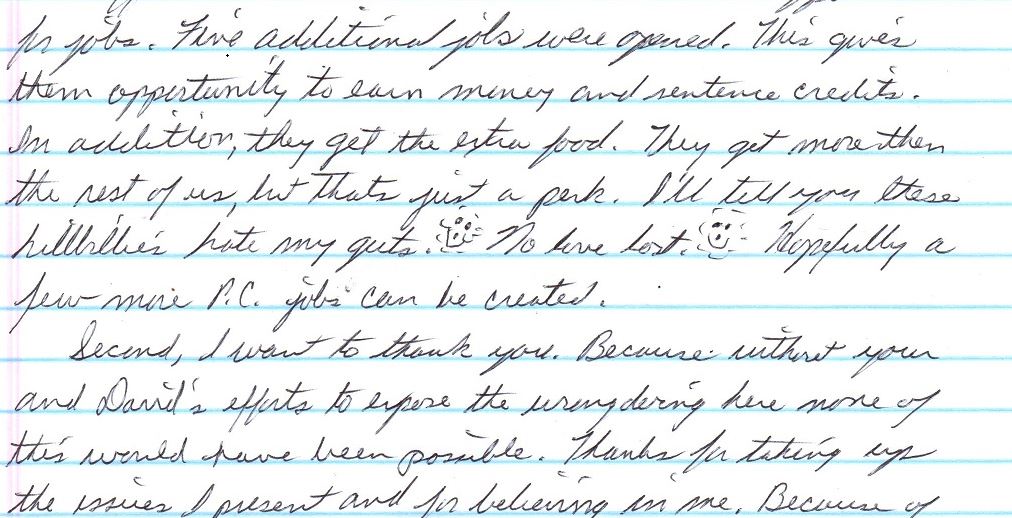 The last paragraph of his letter reports that there remains an occasional problem with the heat in his cell. Since November, Harmer had reported “freezing” temperatures in his cell from which he was unable to escape except by wearing 4-5 layers of clothing, including hats and gloves, and by remaining in bed under the covers as much as possible.

In September, TDOC spokeswoman Neysa Taylor told Tulis that Harmer’s reports of policy violations and other issues are “fictitious.”

Earlier this month, Harmer reported that the heat had been restored to his cell most of the time.  On January 13, Tulis reported that Taylor termed a recent letter from Harmer which Tulis shared with her via email about lack of heat to his cell “erroneous.”

“The most glaring discrepancy is the thought that the heat has been turned off to his cell,” Taylor wrote in an email reply to Tulis. “The heat cannot be turned off for one cell. The hearing unit warms the entire pod. This is just another example of the  erroneous and outright fictitious information that is being maliciously spread regarding the department.”

“The cold air is being pumped in right now,” Harmer wrote in his January 24 letter. “In an hour or to the heat will come back on. While not perfect I can sure deal with cell temperature a lot better.”

While often reporting negatively on events and processes at the prison, in a letter dated January 19, 2018, Harmer reported that a prescription medication discontinued in late December was restored to his daily regimen.  On December 18, The Post & Email reported that Harmer had written that another medication, Antivert, was withheld for a short time but reinstated.

The Post & Email has sent a number of its articles about alleged Tennessee prison conditions to Taylor for comment but has rarely received a response.