(Oct. 10, 2018) — An inmate at one of Tennessee’s ten state-run prisons wrote in a letter received Tuesday that his diabetes and diabetic neuropathy have been under-treated with the purpose of saving the Tennessee Department of Correction (TDOC) money.

The inmate wrote that when he arrived in prison 13 years ago, he “was in pretty good health with the exception of hypertension. In 2010 I was diagnosed as having Type Two diabetes. I was prescribed Metformin and was then put on insulin. I struggled and eventually was lucky enough to stop insulin but remain on Metformin for the diabetes after a few years.”

Three years later, the inmate reported, he began “having a lot of pain in my feet and legs. After a lot of sick calls and begging for help I was seen by a specialist who diagnosed me as having diabetic neuropathy,” nerve pain and damage brought on in many cases by high blood sugar levels.

He said he was given Gabapentin to ease the pain but that in February, Centurion, the state’s contracted prison medical provider, started removing medications from inmates in order to save money. He detailed that the Metformin, the generic for Glucophage, was reduced from 2,000 milligrams a day to a 1,000 milligrams a day without his knowledge or consent.

In July, the inmate said, the Gabapentin was also reduced from 1,600 mg daily to 900 mg “knowing that I am in constant pain from nerve damage and with the knowledge that this condition has only worsened over time and continues to do so.”

He wrote that his glucose levels, as evidenced by a three-month blood test known as a “Hg (hemoglobin) A-1 C” are elevated, and as a result, Dr. Gann “promised to raise the diabetes meds back up to where they were but did not do so.”

According to the American Diabetes Assocation (ADA), diabetes can cause complications such as heart disease, foot infections, kidney disease, and visual impairment such as glaucoma.

The inmate falls under the category of “chronic care” since he has a permanent disease, he said, and should therefore receive a medical checkup quarterly. “I have witnessed several inmates try to get medical treatment but end up passing due to these people’s lack of caring,” he wrote of his jailers. “I did not have this desease or damage before being incarcerated and I don’t want to die in here just to save them money.” [sic] 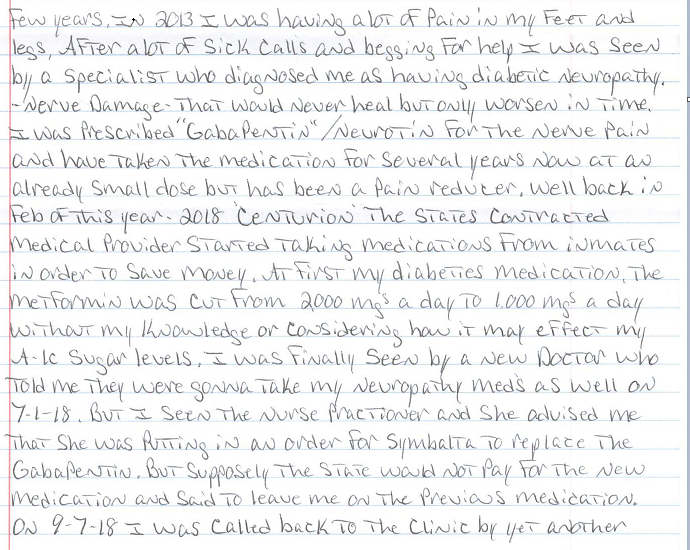 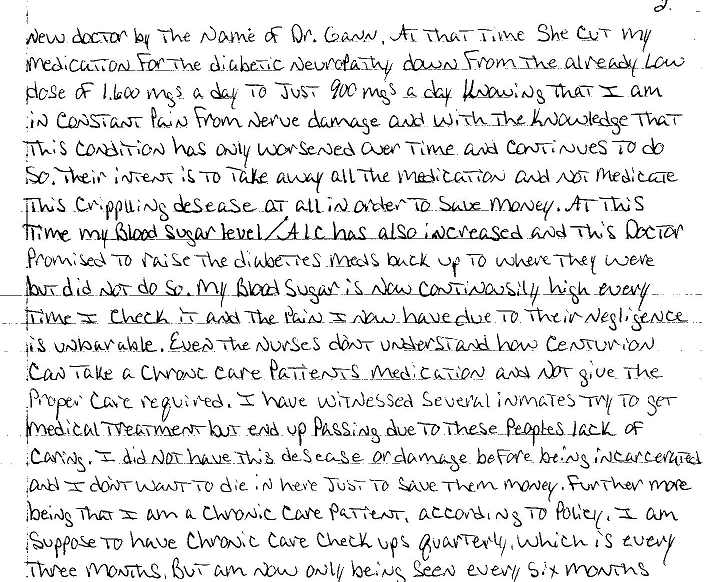 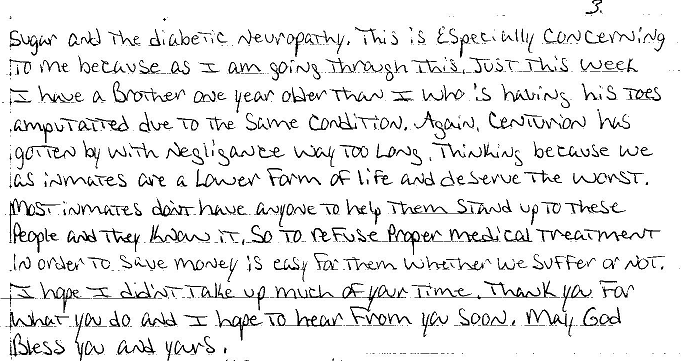 4 Responses to "Inmate Calls Out TDOC for “Medical Malpractice”"