“HEARING FORM SHALL BE MARKED CONFIDENTIAL”

(May 16, 2018) — A copy of a memo addressed to Associate Warden of Treatment Ken Hutchinson at the Morgan County Correctional Complex (MCCX) by inmate Grenda Ray Harmer, #88710, states that “an improper P.C. hearing review” took place outside of his cell door.

According to policy #404.09, page 4 of the Administrative Policies and Procedures posted on the Tennessee Department of Correction (TDOC)’s website, regular, frequent reviews must be conducted of an inmate’s placement in protective custody, where Harmer has been housed since early August of last year due to a threat from a gang member.

Harmer has reported on numerous occasions that no such review has ever been conducted of his situation.

Further, the policy states that the inmate must be permitted “to appear at the hearing to provide pertinent information to the panel regarding the inmate’s status.”

In his May 7, 2018 memo to Hutchinson, Harmer wrote that “Counselor Cowen and the other P.C. board members came to my cell and asked me through the door if I had anything for the P.C. board; this is the first time they conducted a hearing.”

Harmer then said that he “informed Counselor Cowen that he is conducting an improper P.C. hearing review by conducting it in front of other inmates.  That P.C. hearings are supposed to be conducted in private because P.C. review hearings, according to TDOC Policy 404.09, are suppose to be confidential.”

Harmer’s claim is supported by page 3 of the policy, which states:

“My cellmate and my next door neighbor could hear everything that is being said,” Harmer further wrote.  “I refuse to discuss confidential information in front of staff and inmates that have no business hearing it.”

As a remedy, Harmer asked, although without placing a question mark at the end of the sentence, “Would you please ensure from this point on that all P.C. hearings be conducted in private in a room where only the P.C. board and the prisoner being reviewed can hear what is going on.”

Harmer’s memo follows.  The horizontal line is a result of a crease in the document from when it was mailed.  The subject of the memo reads, “Improper P.C. board hearing.” 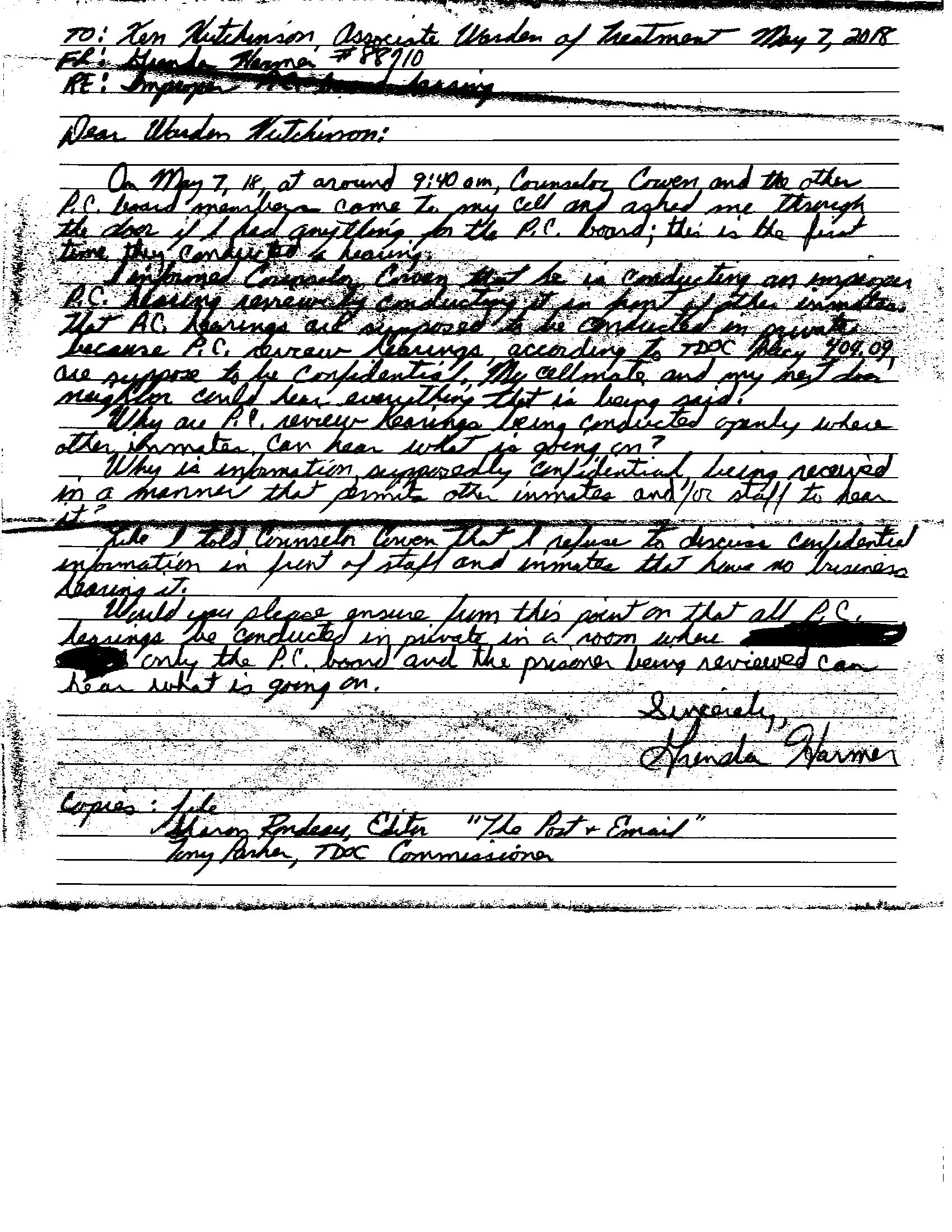