CHILDREN ARE SUFFERING, BUT WHERE IS THEIR “#METOO” MOVEMENT?

(Dec. 5, 2018) — On Tuesday, someone using a “US Senate” ISP accessed three different articles about a Tennessee mother who lost custody of both of her daughters in what she described to us as a web of corruption, deceit, and unconstitutional acts on the part of family-court judges.

The initial article, published in 2011, was our first installment in the story of western Tennessee mother Karen Caldwell, who said that Judge Christy Little had retaliated against her for her attempts to take her complaints of misconduct against three judges involved in her cases to a grand jury and to the Tennessee legislature for action.

In November 2017, local media reported that Little was reprimanded by the Tennessee Board of Judicial Conduct for the infraction of repeated “tardiness.”  “Our sheriff has been pulling Kristy Little out of ditches for a long time,” Caldwell told us in September 2012.

As shown by the url of the third article accessed by the Senate on Tuesday, Caldwell was successful in regaining custody of her older daughter in 2012 after a three-year effort on her part.  Although she vowed to regain custody of her younger daughter as well, we lost contact with her shortly thereafter.

In July 2014, The Post & Email contacted staffers for the U.S. House and Senate Judiciary Committees requesting a congressional investigation into the corrupt Tennessee court system as well as a federal judge in Knoxville who had refused to consider exculpatory information in the case of Darren Wesley Huff.  As a result, Huff served four years in federal prison for a non-crime.

In response to our congressional contacts, one of the staffers invited us to “feel free to send me what you have” in the way of documentation, which we did.  Since that time, The Post & Email has reported on civil-court corruption in Sumner County, TN; Las Vegas, NV; and Los Angeles, CA, all involving child custody.

A plethora of information exists demonstrating that county and state child-protective services are often overzealous and accusatory of parents without evidence, at times based on an anonymous phone call, as in the case of the Hendersons. In 2011, the Henderson parents told us, an unidentified neighbor contacted authorities to report an allegation that Jeffrey Henderson had spanked his daughter, precipitating a raid by the Pasadena Police Department during which they used a battering ram to break down the door to the parents’ home. Following that, their then-six children were forced to strip naked so that police could inspect them for signs of physical abuse, of which none were found.

We were first made aware of the Henderson family of Los Angeles in early 2012 after we were informed that a nursing infant was seized from his mother’s arms and placed in foster care without proper documentation.  At that point, his five older siblings had already been taken, but the family was enjoying an unsupervised visit when the police arrived.

The couple had two more children, and eventually, all were placed in foster care by the Los Angeles Department of Child and Family Services (DCFS) without any documentation of neglect or abuse. While we have also lost contact with that family, upon our last telephone interview with Jeffrey Henderson in November 2014, he said that to his knowledge, all eight of his children had been placed on a path to adoption, some with relatives they had never known and two with a lesbian couple.

While child-protective services often state that their goal is to reunite families, that outcome has not occurred in the cases of the Hendersons and others about which The Post & Email has reported since 2011.  Conversely, in some cases where clear neglect and abuse have been noted and reported to teachers and other mandatory reporters who have followed through on those obligations, children have died after having been left with the abusive parent or parents.

The Williams family lost custody of its three children after the mother, Kanika Williams, reportedly experienced severe side effects to a medication she had been given, and her husband, Roosevelt Williams, sent their child to his grandparents in California to reside temporarily while Kanika was hospitalized in Alabama. At first unsuccessfully, Kanika’s mother contacted Los Angeles DCFS and attempted to open a case, at which time she was told there was no evidence of abuse or neglect against the boy and therefore no case would be initiated.

A second attempt, however, was successful.  The child, now nine years old, and his two younger siblings, are about to be permanently adopted by Kanika’s parents despite no criminal charges ever having been filed for abuse or neglect against Roosevelt or Kanika Williams.

In the case of “Michelle Robinson,” a Los Angeles police department detective held her accountable for allegedly violating a restraining order she had requested and been granted against the father of her child, thereby allegedly placing her child in danger when she entered into a physical altercation with the other parent. An initial DCFS investigation showed no abuse or neglect and was closed with no action taken. However, after Detective Sean Horton recontacted DCFS and said a video existed of Robinson acting as the aggressor against the child’s father, DCFS took it upon his word, opened a second case, and removed Robinson’s then-15-month-old daughter from her care, never to return her.

She now resides with Crutchfield, who Robinson said has a history of drug abuse, a documented restraining-order violation resulting in jail time and possible involvement in another serious crime about which the LAPD has never contacted her despite her having reported it several times.

Although initially named in the case, Robinson’s then-16-year-old daughter was permitted to remain with her mother and eventually removed from the case with no allegations of abuse or neglect filed.

The report of a document of mysterious origin canceling Robinson’s restraining order against her daughter’s father, Eric Crutchfield, has thus far not moved the California Commission on Judicial Performance nor the state attorney general to launch an investigation, at least to Robinson’s knowledge. The FBI has also been contacted about the order, which is not contained in either of Robinson’s official court files concerning her daughter.

Some have termed child-protective services’ removal of children from their parents’ care, sometimes without a warrant, as “legal kidnap for profit,” and in rare cases, juries have awarded considerable sums to parents whose children were found to have been removed without cause. Even those decisions do not always result in the immediate return of the child.

In the case of “Irene,” she and her ex-husband share custody of their six-year-old daughter, but changes have been effected by Torrance Family Court Commissioner Glenda Veasey without evidentiary documentation and based solely on the requests of the father. Although two different physicians, one a pediatrician and the other a gastroenterologist, have recommended that the child see a child therapist, Veasey has prevented it, and the child continues to suffer emotionally and medically, according to her mother. She has also been prevented from taking part in extracurricular activities that she enjoyed and which Irene was willing to continue at her own expense but for the objections of the father and Veasey’s acquiescence to them.

In a case in Texas which, by full disclosure, The Post & Email has not investigated, a six-year-old twin boy will undergo sex-change hormonal treatment and possibly surgery within two years with the blessings of a Dallas, TX District Court judge and against the father’s wishes, although at his expense.

The child’s mother is a pediatrician.  An August 27, 2018 letter from her attorney to the father’s attorney reads as follows: 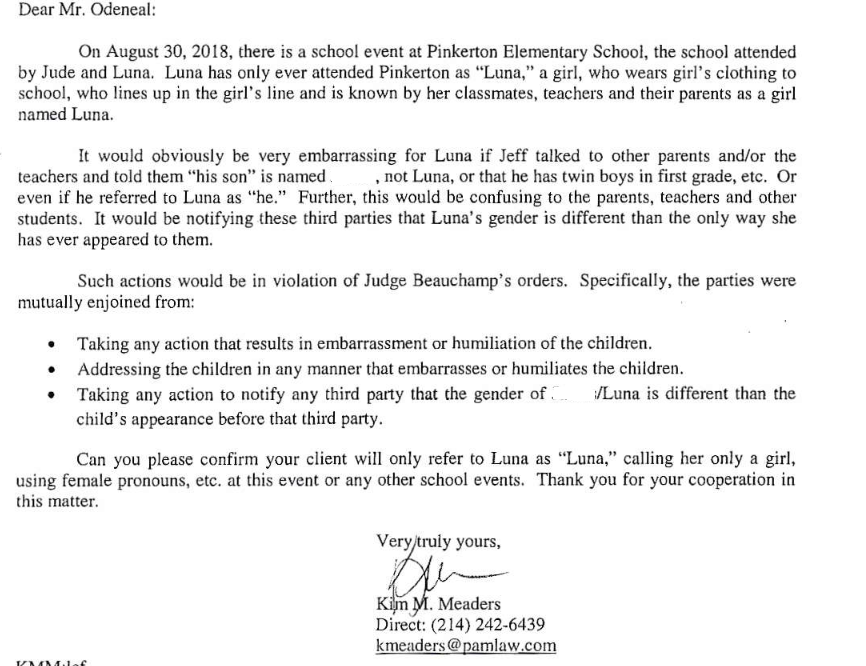 That case has been made public at change.org.

Is Government Destroying Our Most Precious Resource? added on Wednesday, December 5, 2018