“I’LL BE GLAD TO FLAG IT FOR REVIEW” 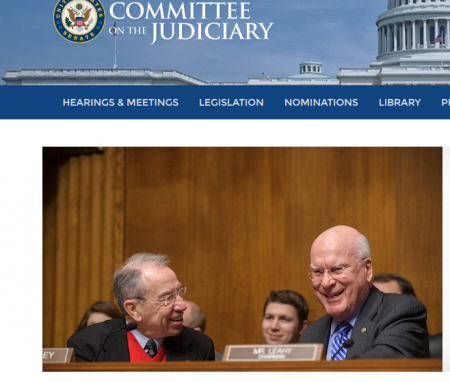 (Jul. 7, 2014) — The Post & Email has made several phone calls to the offices of U.S. representatives and senators to request a congressional investigation into the Tennessee state courts and specifically, the Tenth Judicial District, where Judges Carroll Lee Ross, Amy Reedy, and Jon Kerry Blackwood preside.

Blackwood is a retired judge with the title of “Senior Judge” who presides over cases as needed, not necessarily limited to the Tenth District.

On June 24, 2014, CDR Walter Francis Fitzpatrick, III (Ret.) was convicted of “aggravated perjury” and “extortion” after the key witness, Jeffrey Cunningham, admitted in sworn testimony that nothing Fitzpatrick submitted to the McMinn County, TN grand jury was inaccurate in any way.  Cunningham also retracted his status as Fitzpatrick’s accuser, stating only that he had spoken with a prosecutor at the District Attorney General’s office after Fitzpatrick attempted to submit evidence of crimes committed by judges, prosecutors, and Cunningham to the grand jury for its review.

In his attempted submissions made over several months to the grand jury, Fitzpatrick had explained, and included the brief of, Tennessee Deputy Attorney General Kyle Hixson, who disagreed with state law and wrote that the foreman of the grand jury is appointed by the criminal court judge.

Grand jury foremen in Tennessee serve for years and sometimes decades, a fact to which all of the aforementioned judges can attest via their signatures on appointing orders obtained by Fitzpatrick through multiple open-records requests over the last three years.  Blackwood, however, has stated in court that the foreman “is no different from any other member of the grand jury.”

State code calls for grand juries to comprise 13 members and up to five alternates, but Tennessee grand juries consistently contain 12 members empaneled by allegedly random selection and the foreman, who is appointed by the criminal court judge and serves for as long as the judge desires.

Undue influence on the grand jurors was evidenced during a pre-trial hearing on June 16, when a grand juror admitted that she was “intimidated” by information imparted to her about Fitzpatrick by Cunningham in January and therefore voted to indict him in March on the two aforementioned charges plus those of “stalking” and “harassment.”

Another grand juror said she “could not remember” the deliberations on Fitzpatrick’s case because she had allegedly suffered “a series of strokes” since March which impaired her memory.

Fitzpatrick’s attorney, Van Irion, stated during the hearing that some of the grand jurors who indicted Fitzpatrick told him something different than that which they stated in court.  Blackwood had dismissed the charge of “stalking” on June 23, and the jury acquitted Fitzpatrick of “harassment.”

As Cunningham denied being Fitzpatrick’s accuser, the state assumed the role even though it also served as prosecutor.  Tenth Judicial District deputy prosecutor A. Wayne Carter, a retired full-bird Army colonel, derided Fitzpatrick in front of the jury on the 24th for wearing his Navy uniform to court, despite the fact that congressional statute allows a military retiree to wear the uniform in public.

Nevertheless, Blackwood proceeded with the trial and accepted the jury’s verdicts.

On Monday morning, The Post & Email contacted the Athens, TN office of Rep. Chuck Fleischmann, but once identifying ourselves as media, we were told to call his Washington, DC office.  In doing so, we were directed to the voice mail of Fleischmann’s media contact, Tyler Treadgill.  Our message stated that the Tenth Judicial District is rife with corruption; that its judges hold illegal courts and bend the rules and laws to fit their needs; and that citizens of Fleischmann’s district are suffering needlessly from the judiciary’s abuse of power and violation of law.

We then called the office of the U.S. House of Representatives Judiciary Committee and were provided with the email address for its media relations person, Jessica Cullins. We then called the Senate Judiciary Committee and spoke in person with media relations representative Jessica Brady, who, after we related our concern then responded to us, “Feel free to send me what you have, and I’ll be glad to flag it for review.”

The Post & Email sent a joint message to Ms. Cullins and Ms. Brady:

To: jessica.collins@mail.house.gov
Cc: jessica_brady@judiciary-dem.senate.gov
Ms. Brady, thank you so much for taking the time to speak with me this morning about judicial corruption in Tennessee to include the federal judiciary.

Ms. Collins, I did not have the opportunity to speak with you, but I was given your email address by the aide who answered the phone for the House Judiciary Committee after I identified myself as a member of the media.

The reason for my call this morning was to alert the respective U.S. House and Senate Judiciary Committees that there is rampant corruption in the Tennessee courts which involves human trafficking, racketeering, and operating courtrooms which have the appearance of constitutionality but are, in reality, places where a defendant can never receive a fair trial.

The grand juries and trial juries are rigged and intimidated into voting to convict virtually every time, without any evidence.  Hundreds, if not thousands, of Tennesseans have been falsely jailed and imprisoned as a result of the rampant corruption in the courts, of which local sheriffs and law enforcers are aware and actively participate.  It is most definitely a “follow-the-money” scheme.

After more than four years of reporting on the criminality specifically in Tennessee’s Tenth Judicial District, I have acquired evidence that a federal judge or judges could be involved.

The U.S. Attorney for the Eastern District of Tennessee, William C. Killian, will not take a complaint directly from a citizen, but only “from an agency,” as I was told two weeks ago by his receptionist.  For the last five years, victims and their relatives have provided reports of criminality to the Knoxville and Chattanooga FBI offices, the Tennessee Bureau of Investigation (TBI), local law enforcement, the Tennessee Attorney General, and their congressmen.

To date, nothing appears to have been done to rein in rogue judges, including those at the U.S. District Courthouse in Knoxville.

An example of federal judiciary involvement is that a habeas corpus petition filed on January 30, 2012 with the U.S. District Court in Knoxville on behalf of CDR Walter Francis Fitzpatrick, III (Ret.) lacked a decision by the judge until 26 months later, when he denied the petition after Fitzpatrick was falsely arrested by McMinn County Sheriff’s deputies.  The judge’s denial came within an hour or two of Fitzpatrick’s arrest on March 18, 2014, which raises the question of collusion between state and federal entities after 26 months of no response.

Fitzpatrick’s “trial” on June 23 and 24 was a sham proceeding in which the accuser denied that he ever made any accusations against Fitzpatrick but after which Judge Jon Kerry Blackwood upheld two convictions which could have applied only if the accusations existed.  In Tennessee, the grand juries, courtrooms and trial juries are used as retaliatory instruments to incarcerate people, particularly those who expose government corruption.

Another example of federal involvement in Tennessee judicial corruption is that exculpatory evidence which I and others provided directly to Judge Thomas A. Varlan at the U.S. District Court in Knoxville prior to the sentencing of Navy veteran Darren Wesley Huff, as well as documentary evidence that law enforcement had defamed Huff prior to his federal trial, was not considered.

Both Huff’s and Fitzpatrick’s photographs appeared in a law enforcement training program produced in conjunction with the federal Department of Homeland Security, the TN Department of Homeland Security & Safety, the FBI, and the Southern Poverty Law Center.  I have a copy of the DVD used to train law enforcers throughout the state and perhaps the nation as well as the documentation depicting falsely Fitzpatrick and Huff as “Sovereign Citizens” produced with both state and federal tax dollars.

The Post & Email broke the story nationally of the “Sovereign Citizen” training program in April 2012.

We also have hard evidence in the form of sworn affidavits that the FBI agent whose affidavit was relied upon by the U.S. attorney in Huff’s case contains inaccurate information.  Again, we have brought these facts and documents to the FBI repeatedly and on one occasion have been told, “This is Tennessee.  Live with it!”

The FBI is funded with federal taxpayer dollars and is in some cases not doing its job.

FOIA requests submitted to the U.S. Department of Justice more than two years ago resulted in first the claim that no responsive documents existed, and then the claim upon appeal that they existed but could not be released due to “privacy” concerns.

I have also sent documentation and proof of my claims to the Sixth Circuit Court of Appeals, which received Fitzpatrick’s habeas corpus petition several months ago, unbeknownst to him.  Therefore, the U.S. District Court in Knoxville apparently forwarded it there without notifying the petitioner, which is not standard procedure.

The defamation of Huff and Fitzpatrick on both the state and federal levels has prejudiced any jury and could be part of “Operation Vigilant Eagle,” which reportedly targets military veterans as “potential domestic terrorists,” also funded by federal taxpayer dollars.

Thank you again for being willing to transmit this information to the House and Senate Judiciary Committees, respectively, and please let me know if you need additional information.

The Post & Email then called the office of Judge Jon Kerry Blackwood at 865-594-6118 at 11:25 a.m. EDT/10:25 a.m. CDT.  An answering machine took our message, in which we said that we have called for a congressional investigation into Tennessee’s Tenth Judicial District, Tennessee courts as a whole, and the verdict of the Fitzpatrick case which was unsupported by any evidence.  We left our name, the name of our publication, and phone number.

U.S. Senate Judiciary Media Spokeswoman on Judicial Corruption: “Feel Free to Send Me What You Have” pb added on Monday, July 7, 2014

One Response to "U.S. Senate Judiciary Media Spokeswoman on Judicial Corruption: “Feel Free to Send Me What You Have” pb"