(May 7, 2015) — For more than three years, a former Tennessee law enforcement officer now residing in California has not known whether or not he is legally divorced.

In documents issued by the Chancery Court of Sumner County, TN which The Post & Email has reviewed, an “absolute divorce” was granted to the wife of Clifford Eugene Rockholdt despite the fact that she never requested one.  Instead, Ms. Rockholdt had filed for a legal separation and expressed the desire to remain married for a period of ten years so as to secure her husband’s Social Security benefits.

However, on October 6, 2011, following a hearing the previous day, Ms. Rockholdt was granted a divorce based on Mr. Rockholdt’s alleged “abandonment” as reported in the court documents.

Since that time, the case has dragged on through the Sumner County Chancery Court and remains ongoing.

While living in Tennessee, Mr. Rockholdt was employed first as a sheriff’s deputy after which he was promoted to the rank of detective.

In a proceeding on April 14, 2015 in which Mr. Rockholdt participated by phone from his home in California, Judge Louis Oliver III declared that the Rockholdts are legally divorced after “assuming” that his predecessor, Judge Tom Gray, processed the case correctly.  On April 14, Mrs. Rockholdt’s attorney, James Hawkins, said that his client had testified previously that she “wished for a divorce,” a claim Mr. Rockholdt contests.

Hawkins is a candidate for Sumner County General Sessions Judge.

Mr. Rockholdt had filed for a divorce but was not granted one.

In a court document indicating that a hearing would take place on January 2, 2013, a hand-marked cross-out with the words “with permission” is seen with a change to January 4, 2013 about which Mr. Rockholdt was never informed.  His counsel of record at the time, Atty. Jack Freedle, withdrew from the case shortly afterward but told Mr. Rockholdt in an email which The Post & Email has seen that he did not receive official notification of any date change.

In a petition to the Sumner County Chancery Court stamped “filed” on January 30, 2015, Mr. Rockholdt explained that neither he nor his attorney was properly notified of the change. 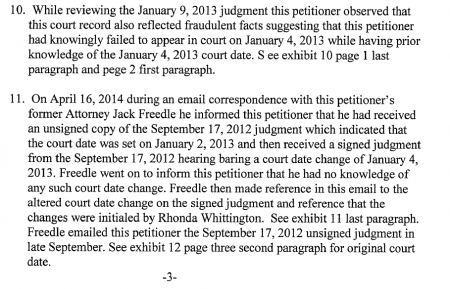 Court clerk Ronda Whittington has not returned calls from The Post & Email asking if proof exists that Mr. Rockholdt was legally notified that the hearing date was changed.

On another occasion, we called the clerk’s office to ascertain that a scheduled hearing would take place and were told that there was no hearing that day.  After we informed Mr. Rockholdt, he told us that he would not have known had The Post & Email not made its inquiry, as he was prepared to participate in the scheduled hearing by phone as agreed to by the court.

In March, Mr. Rockholdt took a part-time job in addition to his full-time employment in California and immediately discovered that the amount of child support and alimony automatically deducted from his full-time paycheck was also ordered deducted by the Tennessee Department of Human Services from his part-time salary.  If insufficient funds existed to satisfy the full amount, the court’s standard order is to deduct 50% of the paycheck.

Upon calling his part-time employer and explaining that his obligation was already being deducted from his full-time job’s salary, Mr. Rockholdt was told that the court order had to be obeyed unless it were officially changed.

The Post & Email contacted Child Support Enforcement Field Operations Management Director Charles Bryson by both email and phone about the double-garnishee of Mr. Rockholdt’s income.  Our email reads, in part:

I have extensive documentation from Mr. Rockholdt that both of his salaries are under garnishment for the same child support obligation.  There have also been numerous other irregularities in his case, which appears to be dragging out despite the fact that he has been paying his obligation from across state lines.

I have contacted the Child Support Office and been told that the computers are down, and Ms. Stacie Watkins did not return my phone call inquiring as to why both jobs are under garnishee.

The Post & Email is an online newspaper which investigates government activity and corruption.

Thank you very much for looking into this.

We then received the following response:

Good morning, Ms. Rondeau,
I am Devin Stone and I work with the Tennessee Department of Human Services, Public Information and Legislative Office. We routinely handle media inquiries and related requests. Your email and voicemail were forwarded to me by Charles Bryson for further response.
In general, specific child support information, such as what you have requested for Mr. Rockholdt is confidential. If Mr. Rockholdt would like to speak to someone here in state office regarding this in more detail, he can contact Patricia Hymer, Director of Child Support Customer Service and Administration at (615) 313-4994 or by email at Patricia.Hymer@tn.gov.
Your original email has been sent to her as well, so she is expecting to hear from him.
Thank you,

Mr. Rockholdt then wrote a detailed letter to Patricia Hymer. Rockholdt has received no response from Hymer as of this writing. Tompkins falsely stated that the full amount of child support and alimony was not routinely deducted from Mr. Rockholdt’s full-time salary while conceding that the court order to deduct money from his part-time employment had been canceled.

In addition to Whitley, the letter was copied to three private attorneys unknown to Mr. Rockholdt, who has not been informed as to what role they may play in his case.  In a recorded interview with The Post & Email, Mr. Rockholdt stated that his privacy rights may have been breached unnecessarily by Tompkins’ interaction with the three attorneys.

Mr. Rockholdt has also had a federal income tax refund withheld by the State of Tennessee, of which the U.S. Child Support Enforcement Office reported to him that it had no record of the arrearage.  The federal agency must be able to confirm that child support is in arrears before any withholding of federal income tax return moneys. On April 16, 2015, the only party to be sworn in was Mr. Rockholdt.  The other parties, Ms. Rockholdt; her attorney, James Hawkins; and the Assistant District Attorney General for Child Support Enforcement, Richard Tompkins, were not sworn in.  Tompkins, who was not expected to appear, said that he happened to be in the area on business.

I am submitting this letter requesting a current up to date balance of my alimony arrears along with the account transaction records related to all monies obtained by the Tennessee Department of Human Services for the month of March and April 2015 and applied specifically towards the alimony arrears.

Thank you for your assistance, Cliff Rockholdt

The Post & Email’s telephone call to Tompkins made nearly two weeks ago received no return call.

Rockholdt has spoken with two attorneys who have told him that they do not believe his divorce was executed legally.

Is the Sumner County, TN Chancery Court Committing Crimes Against Families? added on Thursday, May 7, 2015

2 Responses to "Is the Sumner County, TN Chancery Court Committing Crimes Against Families?"