DO JUDGES SEEK JUSTICE OR PROTECT THEIR OWN? 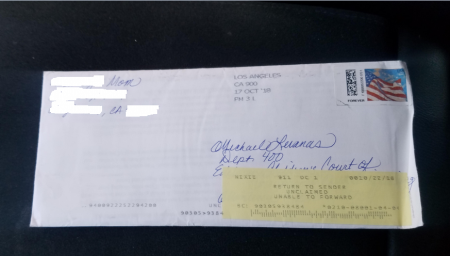 (Nov. 21, 2018) — On November 3, “Michelle Robinson” received a returned letter she had sent to Supervising Judge Michael Levanas asking for redress in response to the Department of Children and Family Services (DCFS) having removed her youngest child from her custody in March 2016.

Robinson believes that DCFS social workers and supervisors took a dislike to her because of her outspokenness and retaliated against her by advocating for and placing the child with Crutchfield.

Before mailing the letter, Robinson wrote her return address as her daughter’s name in possessive form followed by “Mom” and Robinson’s postal address.

On November 3, the letter was returned to Robinson bearing a postal label which states:

Robinson and Crutchfield are restrained from any contact because of permanent restraining orders each has against the other.

While Robinson has always maintained that she posed no threat to her daughter, who was 15 months old when she was removed from her care, Robinson lost her appeal in April 2017.  She has not seen her daughter for more than two years and has no idea as to her well-being or whereabouts.

In February, Robinson became alarmed when she learned that an order appearing to have been signed by the commissioner who presided over the child’s custody determination was apparently deceptively issued but never officially filed in either of two court files.  Unbeknownst to her for more than a year, the order purported to cancel the protective order she had obtained against Crutchfield and enabled him to be awarded custody.

Robinson first filed for a protective order against Crutchfield in March 2015 at the Torrance Superior Court, Family Law division, a request granted by Commissioner Glenda Veasey.  In December of that year, Veasey made the order “permanent,” which in California constitutes a standard three-year period. At the same time, Veasey awarded Robinson full physical and legal custody of the child, then just under one year old.

In order to obtain the Domestic Violence Restraining Order (DVRO), Robinson provided photos and other evidence of a domestic-violence event which occurred in her home, after which she evicted Crutchfield permanently. An older child of Robinson’s, then 16 years old, called 911 from her room when she heard the disturbance between Crutchfield and her mother.

Although listed on the original DCFS documents, the elder daughter was never removed from Robinson’s care and was later dropped from the case. However, the Department determined that Robinson posed a threat to her youngest child after she took her to see Crutchfield on the occasion of her first birthday and the two adults entered into a physical altercation.

The child was asleep in her car seat during the incident, which caused Robinson to flee to her car, place her daughter in the care of an adult relative, seek medical attention for a human bite she sustained, and report the incident to the Los Angeles Police Department (LAPD).

She asked that Crutchfield be prosecuted, but in a bizarre turn of events, she was prosecuted and eventually convicted of “battery,” although acquitted of “spousal abuse.”

Robinson was oddly provided the alleged court order after reporting what she believed was a restraining-order infraction on Crutchfield’s part on February 9, 2018 to the Hawthorne Police Department (HPD). After attempting to report Crutchfield’s close proximity at the commuter station where she boards transportation each day to and from work, HPD Capt. Julian Catano produced the document, titled, “Findings and Order to Terminate Restraining Order After Hearing” via email.

The document appears to have been signed by presiding Commissioner Steff Padilla following a two-day hearing on October 13 and 14, 2016 at the Edelman Children’s Court and backdated to April 17, 2016.  However, Robinson had been unaware of its existence until contacting the HPD. 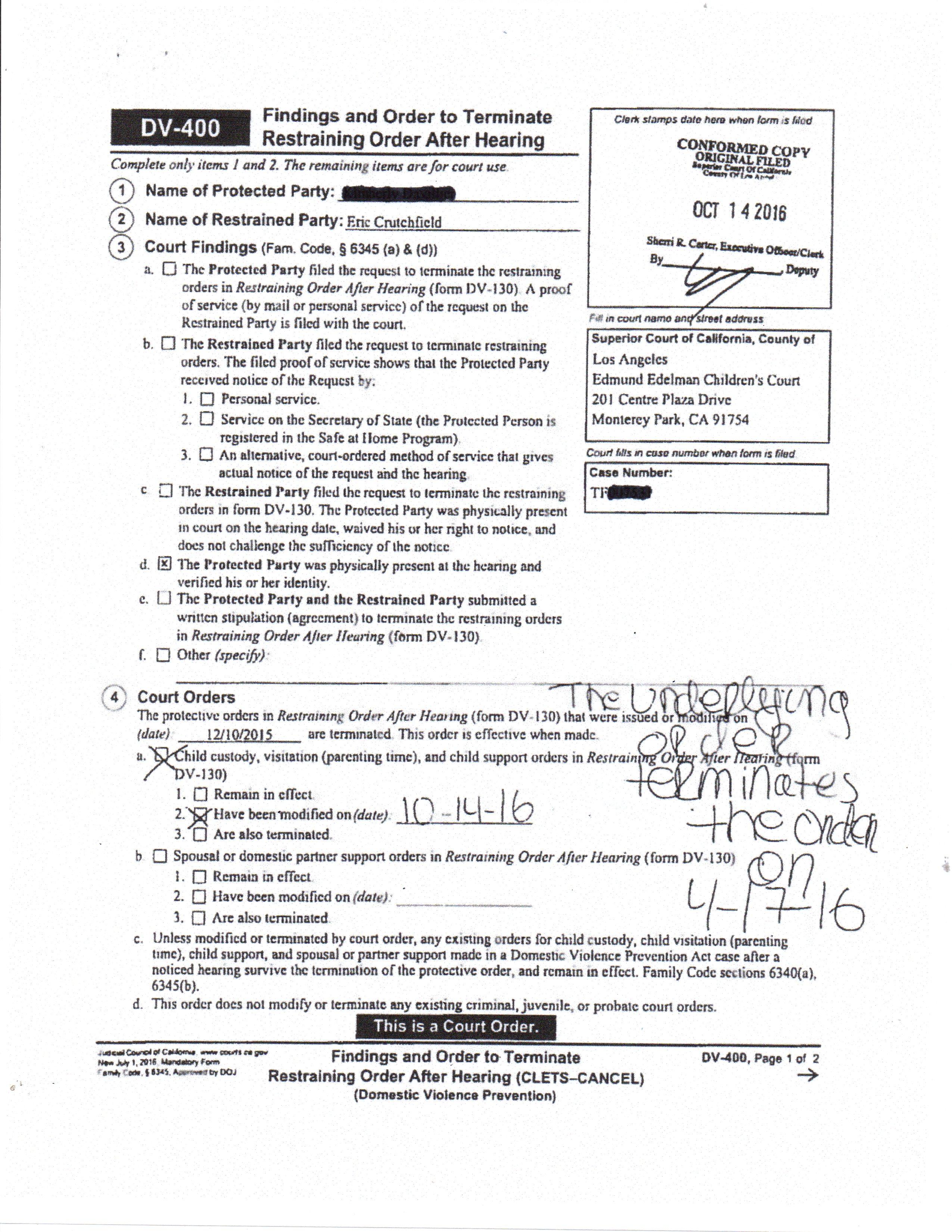 Robinson has reviewed in full the respective files held by Torrance and Edelman, photographed every page and found that Padilla’s “Findings and Order to Terminate Restraining Order” document is not there.

In December 2016, Robinson contacted Edelman Presiding Judge Michael I. Levanas to request an investigation into aspects of her case which she found irregular and potential signs of corruption and malfeasance.  At the time, she was unaware of the termination of her December 10, 2015 restraining order against Crutchfield, if in fact it was in existence then.

When Robinson asked Catano the source of the alleged order, he responded that his “court liaison” produced it but did not name the person nor his ultimate source.  A California public records request sent by The Post & Email to Catano in March for documents containing the phrase “court liaison” received no response.

Prior to permanently losing custody of her young daughter, by prearrangement Robinson had exercised visitation with her daughter at the HPD on several occasions.

In mid-February, Robinson returned to Torrance to not only inspect her file, but also to request a new restraining order, assuming that the document Catano provided was valid. While a new order was not issued immediately, a hearing was held in late March during which Veasey affirmed that her December 10, 2015 restraining order was still in place. At a second hearing, Veasey issued a new, five-year restraining order to put the issue to rest.

On March 7, 2017, Padilla recused herself from the case without specifying a reason.  Despite Robinson’s questioning of the move, her attorney did not provide an explanation for the recusal.

On March 9, 2017, Levanas responded to Robinson’s letter of complaint with the claim that after reviewing the transcripts of the “October 13, 2016” hearing over which Padilla presided, he found no mention of “points and authorities,” an integral part of the hearing and of Robinson’s complaint.  Robinson, who was present in court on both October 13 and 14, 2016, said that Padilla requested written “points and authorities” briefs of both parties’ attorneys on the topic of whether or not Padilla had the authority to override Veasey’s December 10, 2015 restraining order.

Unable to verify the origin of the Termination order or why she had not been made aware of it through normal judicial channels, in May Robinson reached out to the Los Angeles office of the FBI by phone.  She described their response as courteous.  The following month, Robinson followed up by sending the FBI a five-page letter, and copies to California Attorney General Xavier Becerra, the Edelman Court, the California Commission on Judicial Performance, and this publication.

The Post & Email wrote to Levanas twice in March, the second time enclosing a copy of the alleged termination order.  In response, we received a letter from Levanas stating that he is “not authorized to discuss whether a juvenile case exists and/or what is contained in any juvenile case file with a non-entitled person.”  He also wrote that “as the Presiding Judge, I lack authority to change or modify any orders made in a case that is assigned to another judicial officer.”

He did not address our request for an investigation into the origin of the Termination order and why Robinson never officially received a copy.

Last year The Post & Email contacted Becerra by certified mail to describe reports we have received from at least three families, Robinson included, alleging that DCFS removed their children from their custody without justification.  We sent a copy of the letter to the six members of the Los Angeles County Board of Supervisors, receiving a response from none of the parties other than the return certified-mail card from Becerra’s office.

Robinson believes that rather than working in the best interest of children, Los Angeles DCFS is involved in “systemic child trafficking.” She is not alone in that perception.  Allegations of children removed from their parents’ care by child-protective agencies who then go missing, potentially falling victim to trafficking, have been made for years across the country.

Robinson’s county supervisor, Mark Ridley-Thomas, has himself promoted the funding of anti-child-trafficking programs in conjunction with “recommendations from the Departments of Children and Family Services, Health Services, Mental Health and Public Social Services on how best to serve children who are trafficked.”

However, Ridley-Thomas has not responded to communications from Robinson nor from this publication.

On November 12, Robinson re-mailed the letter, newly-dated November 11, to Levanas, with copies to this publication, the FBI, Becerra, and a law firm. In her opening paragraph, Robinson contended that “Failure to acknowledge receipt of communication does not absolve you from your responsibilities entrusted to you by the People of California.”

Robinson sent a separate letter faulting Levanas to Presiding Judge-Elect Kevin C. Brazile, who will be replacing Levanas after he was “elected” by “Los Angeles County Superior Court judges.”

Portions of the letter to Levanas follow.  Personal information has been redacted. 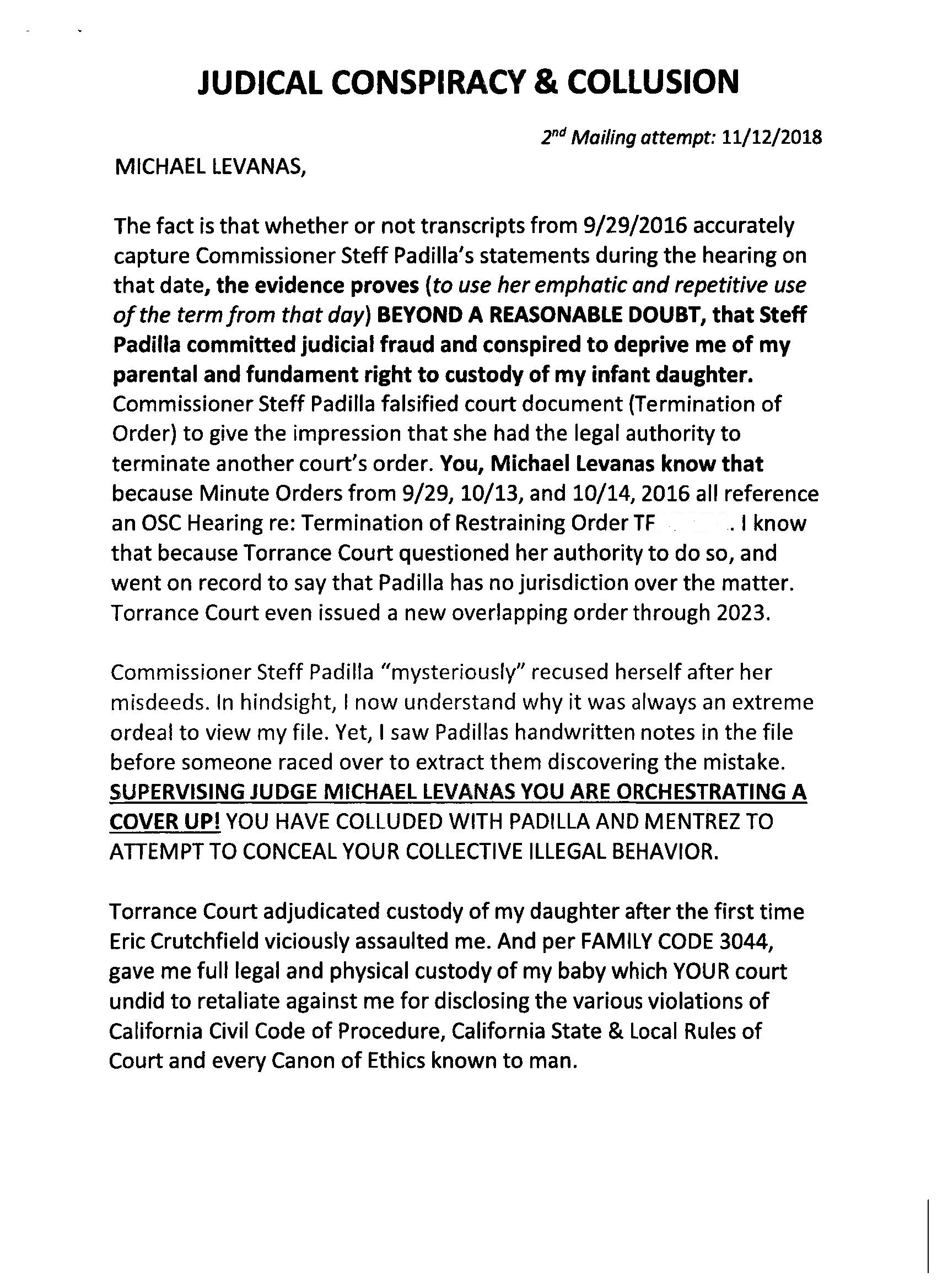