Do DCFS Social Workers Have an Agenda in This Case?

BOTH PARENTS INVOLVED IN ALTERCATION; ONE GETS CUSTODY 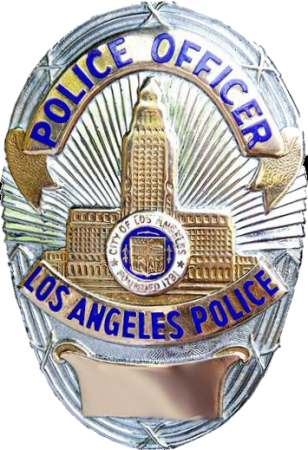 (Mar. 8, 2017) — Since reporting on the story of the Hendersons, whose eight children were ensconced in the foster system in 2011 and, to our knowledge, never returned to their parents despite no charges of neglect or abuse, The Post & Email has noted additional cases demonstrating that the Los Angeles Department of Children and Family Services (DCFS) employs some social workers who make decisions based on personal feelings about parents rather than any credible claim of child abuse.

Last fall, The Post & Email was approached by Roosevelt and Kanika Williams, who reported that they were never accused of abusing or neglecting their children and yet lost custody and visitation rights.  They said that like the Hendersons, they were often not notified of hearings regarding their three children and that counseling and other classes mandated by the Department and completed by both parents were later deemed inadequate.

The Williamses have further accused DCFS social workers of dishonesty, “perjury,” and of predetermining that their children would be adopted without due process afforded them.  As with the Hendersons, they reported that court-appointed attorneys are unhelpful, and even harmful, to parents attempting to secure the return of their children.  Both sets of parents were penalized for attempting to represent themselves.

A third case of which we have just become aware is that of  Michelle Robinson*, who had custody of her young daughter until she was 15 months old, at which time DCFS ordered her to bring the child in to their offices for surrender to her father following an altercation between the two adults.

Ms. Robinson’s saga began on December 10, 2015, when she filed for a restraining order against the father of her daughter after he reportedly beat her.  Ten days later, on her daughter’s first birthday, she agreed to bring her over to her father for a visit.  A physical altercation then ensued in which Robinson sustained a human bite and attempted to retaliate against Eric Crutchfield.  According to Robinson, during the altercation, the child was strapped into her car seat asleep.

Robinson did not leave the child with her father, but rather, left and went to report the injury to the Los Angeles County Sheriff’s Department.  However, while attempting to file a report, she was informed that she was in the wrong jurisdiction and was redirected to the Los Angeles Police Department based on where the altercation had taken place.  When Robinson showed a deputy the bite she sustained, he advised her to go to the emergency room, which she did, after dropping off her young daughter with her eldest child, a young woman of 20.

Robinson was treated at Kaiser and released, after which she provided a report to the LAPD, which took photographs of the bite.

In the early hours of December 21, 2015, LAPD Officer J. Hillinger contacted DCFS with a “referral” based on Robinson’s report of the altercation and a California statute which states, “Upon a finding by the court that a party seeking custody of a child has perpetrated domestic violence against the other party seeking custody of the child or against the child or the child’s siblings within the previous five years, there is a rebuttable presumption that an award of sole or joint physical or legal custody of a child to a person who has perpetrated domestic violence is detrimental to the best interest of the child, pursuant to Section 3011. This presumption may only be rebutted by a preponderance of the evidence.”

After a DCFS investigation into any endangerment which might have existed to the child, the case was closed on February 12, 2016.

Six days later, LAPD Detective Sean Horton notified DCFS that Robinson had violated a restraining order because of her visit to Crutchfield.   Robinson reported that on February 20, 2016, Horton “submitted a police report on behalf of Eric Crutchfield despite the fact that Crutchfield chose not to ’press charges’ on 12/20/2015. Horton had Crutchfield sign the report after the fact*.”

Robinson pointed out to us that per California Penal Code, Section 13710(b), “The terms and conditions of the protection order remain enforceable, notwithstanding the acts of the parties, and may be changed only by order of the court.” “This means that ‘protected persons’ are not in violation of protective orders when they acquiesce or invite the restrained party’s contact and should not be arrested,” Robinson said.

On February 24, 2016, Robinson was interviewed at DCFS, where she was told that Horton had presented “video evidence” against her.  On March 4, 2016, a warrant for the removal of her child was issued by DCFS “based wholly on statements made by Detective Horton,” Robinson said.

On March 10, Robinson received a call while at work from DCFS ordering her to bring her daughter to their offices based on the warrant, which had been approved by a judge.  Robinson cooperated with the order, although she was not shown the warrant, and later learned that her daughter had been placed with her father.

“I would have preferred, if she had to be taken, that she had been placed in a foster home rather than with her father,” Robinson told us.

On July 1, 2016, Robinson was arraigned on charges of “spousal abuse.” The case is still pending before Criminal Court in Los Angeles. Robinson was represented by trusted attorney and ally Renee Sanders until she exhausted her savings and is now relying on a public defender.

At a custody trial on July 27, 2016, Horton testified but, Robinson alleged, “perjured himself.”  Referee Steven R. Klaiff declared a mistrial, and a second trial was held in October refereed by Commissioner Steff Padilla.  Padilla and her husband, Alan Friedenthal, have adopted two children removed from their mother’s care in another DCFS dependency case.

On November 25, 2009, a civil complaint was filed against Padilla, Friedenthal and the Superior Court of the State of California, among other parties, by Laura Lynn, alleging violation of civil rights under 42 USC 1983.  According to court documents, Friedenthal and Padilla represented Lynn’s two children in the case “for just over one year.”  On page 8 of a document filed on June 24, 2011, plaintiff Lynn alleged: 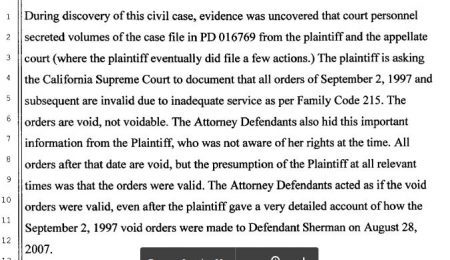 Several California child-dependency cases are discussed on a blog, including Lynn’s and that of Rafaelina Duval v. County of Los Angeles Et Al.  On November 4, Duval, whose son was removed from her care at age 15 months without evidence of neglect or abuse, ultimately won a $3.1 million judgment against DCFS for the negligence of the social workers involved in the case.

Duval’s attorney, Shawn McMillan of San Diego, wrote of the decision, “This case encompasses extremely important issues for the people of Los Angeles, and the people of the State of California. Allegations of social worker misconduct of the type proven in this case are ubiquitous. Hopefully, the remaining 57 counties in California will take note of the outcome of this case and promulgate policies to prevent their social workers from engaging in this type of conduct in the future.” 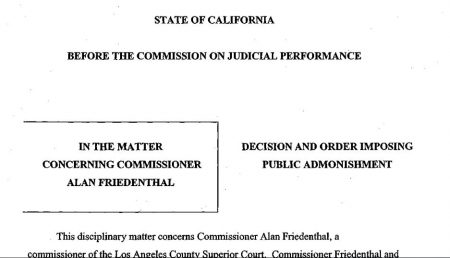 In 2012, Friedenthal received a “severe admonishment” by the California Commission on Judicial Performance (CJP) for “committing misconduct and violating the California Code of Judicial Ethics in five family law cases over which he presided between June 2007 and January 2009.”

The first time she went to the Edelman Children’s Court in the hope of regaining custody of her daughter, Robinson was told by her court-appointed attorney, Ruben Lopezlopez of Los Angeles Dependency Attorney’s Inc (LADL, Inc.), “The court doesn’t trust you.” “I said, ‘The court doesn’t know me,’ Robinson related of the exchange.  “And he said, ‘Oh, no, no, no, the court doesn’t trust you.  In order for the court to trust you, you have to prove to the court that you can follow rules, and you have not been following the rules.  So you are not leaving with your baby today.'”

It is our mission to assure that parents receive their substantive and procedural rights and that they are provided legal representation at low or no cost affording them a fair and reasonable opportunity to parent their child. Too many children are lost to the foster care system, and it is our goal to provide legal assistance to our clients to preserve the family and, in those instances where required, reunify the family through the use of innovative, effective, affirmative, and ethical legal principles and skills.

Robinson said she brought the photos of the bite marks from her altercation with Crutchfield, but when she offered them to her attorney, he said, “I don’t need those.”

“I went in to court, and it went very quickly.  I was a trained paralegal; I have a Bachelor’s degree from UCLA and a Master’s degree, but it went so fast…I heard something about waiving my rights, and I shook my head, ‘No.’”

Following the hearing, Robinson was granted monitored visitation with her daughter three times weekly which she exercised during her lunch hour. She reported that she was penalized when arriving a few minutes late and that social workers maintained a “scorecard” of sorts of her movements, statements and actions. “I used family friends in August and September 2016 as monitors until they became exhausted with the scheduling. The court then ordered professional monitors at my expense, then later changed the order requiring DCFS to pay for professional monitors,” Robinson said.

In a related development, Robinson observed that “My monitors submitted to LiveScan in March 2016 at the onset of this matter. My adult daughter was also required to fingerprint, though no one in Crutchfield’s household was required to be fingerprinted.”

In screening each prospective DCFS monitor, Robinson said she has encountered conflicts of interest and questionable items, including one  DCFS-approved monitor whose name is associated with the adult entertainment industry.

As a result, Robinson has not seen her daughter since October 31, 2016.  She believes that social workers, Horton and the court commissioners are biased in favor of her child’s father and fears for her daughter’s safety.

In an unexpected development on Monday, Robinson was notified by her current LADL, Inc. attorney, L. Katherine Anderson, that Padilla announced she was recusing herself from the case. “Ms. Anderson has not provided any reason for the recusal to date,” Robinson told The Post & Email prior to press time.

*The mother’s name has been changed to protect the privacy of her children.

Do DCFS Social Workers Have an Agenda in This Case? added on Wednesday, March 8, 2017

10 Responses to "Do DCFS Social Workers Have an Agenda in This Case?"