THEN WHERE DID THE “TERMINATION” ORDER ORIGINATE?

(Mar. 24, 2018) — A hearing on Friday in Torrance Superior Court resulted in a confirmation by Commissioner Glenda Veasey that a five-year restraining order issued on December 10, 2015 was never recorded as canceled, as “documentation” proffered by the Hawthorne Police Department last month appeared to show.

This latest development in the case reinforces the repeated claim made by “Michelle Robinson” to the HPD that the restraining order she obtained against her child’s father, Eric Crutchfield, following a domestic violence incident, remains in place.

What has not been explained is how a document stamped with the date “October 14, 2016” and titled “Findings and Order to Terminate Restraining Order After Hearing” was issued but never provided to Robinson nor found in either the Edelman Children’s Court or Torrance Superior Court files dealing with the child-custody case of Robinson and Crutchfield’s young daughter.

Friday’s hearing resulted from Robinson’s request of Torrance to issue a new restraining order after HPD Captain Julian Catano emailed the “termination” order to Robinson, who had reported what she believed to be a violation of the restraining order on Crutchfield’s part on February 9.

Catano’s position was that the HPD could take no action on Robinson’s behalf because the December 10, 2015 restraining order was rendered null and void by the October 14, 2016 directive, which he said he obtained from the department’s “court liaison officer.”  Catano had additionally pointed out that the “Termination” document was uploaded to the website of the Los Angeles Sheriff’s Department, which this writer confirmed by entering the file number. 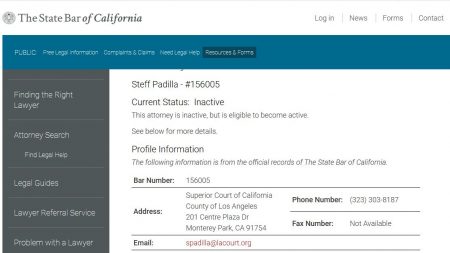 The first page of the “Termination” document contains a handwritten note which reads, “The Underlying Order terminates the Order on 4-17-16” without any initialization.  Page 2 bears what appears to be the signature of “Steff Padilla,” a commissioner who presided over a majority of the dependency case until she mysteriously recused herself on March 6, 2017.

The case concluded with Crutchfield having been given full legal and physical custody of the child, who is now three years and three months old and who Robinson has not seen in 17 months.  The final order issued by Judge Frank Menetrez stipulated professionally-monitored-only visitation three times weekly for Robinson, which costs, at a minimum, $80 hourly.  Robinson has said that she does not believe she should have to pay to see her child and has not found a monitor who meets her standards of professionalism.

The order states that Crutchfield must approve of any monitor(s) Robinson might select and grants Crutchfield and his mother a permanent restraining order against Robinson.

On March 16, 2016, Robinson’s 15-month-old child was taken from her custody by the Department of Children & Family Services (DCFS) following Robinson’s compliance with their request for her to bring her daughter to their offices.  The request arose from a police report Robinson filed against Crutchfield after a physical altercation between them on December 20, 2015 which oddly resulted in Robinson’s prosecution despite Crutchfield’s having decided not to file a complaint on his own.

Although Robinson sustained a human bite, sought medical treatment, filed a report and asked that Crutchfield be prosecuted, she was said to be “the aggressor” by DCFS based on an unverified report from LAPD Detective Sean Horton.  Given that perception, Robinson was deemed to pose a potential danger to her daughter based on Horton’s interpretation of the California Welfare and Institutions Code.

Last July, Robinson was found guilty by a jury of “battery” against Crutchfield stemming from a physical altercation between them which occurred on December 20, 2015, their child’s birthday.  Robinson was acquitted of a charge of “spousal abuse.”

Robinson has related that on October 13, 2016, Padilla presided over a hearing with the purpose of evaluating arguments over whether or not she had the legal authority to cancel the restraining order issued in Torrance.  Robinson said that she has always believed that the hearing was “a sham.”

The order generated by Veasey as a result of Friday’s hearing shows Crutchfield as the petitioner and Robinson as the respondent, which Robinson explained is a result of Crutchfield’s request for custody in Torrance, with Veasey’s response having been issuing the restraining order and awarding Robinson full legal and physical custody of their child.

On February 9, Robinson reported to the Hawthorne Police Department that Crutchfield had violated the restraining order by appearing at the train station where she boards and debarks from her commuter train each day. However, HPD responded that there was no restraining order in effect, having been unable to locate it in the “CLETS” system used by the State of California for court documents.

Several days later, Robinson went in person to Torrance Superior Court to request a new restraining order based on Catano’s claim that none was in force.  The court clerk set a hearing date for March 2, which was continued to March 23 based on Crutchfield’s request for more time.

On Friday, Veasey issued a Minute Order stating that the December 10, 2015 restraining order was still in effect. 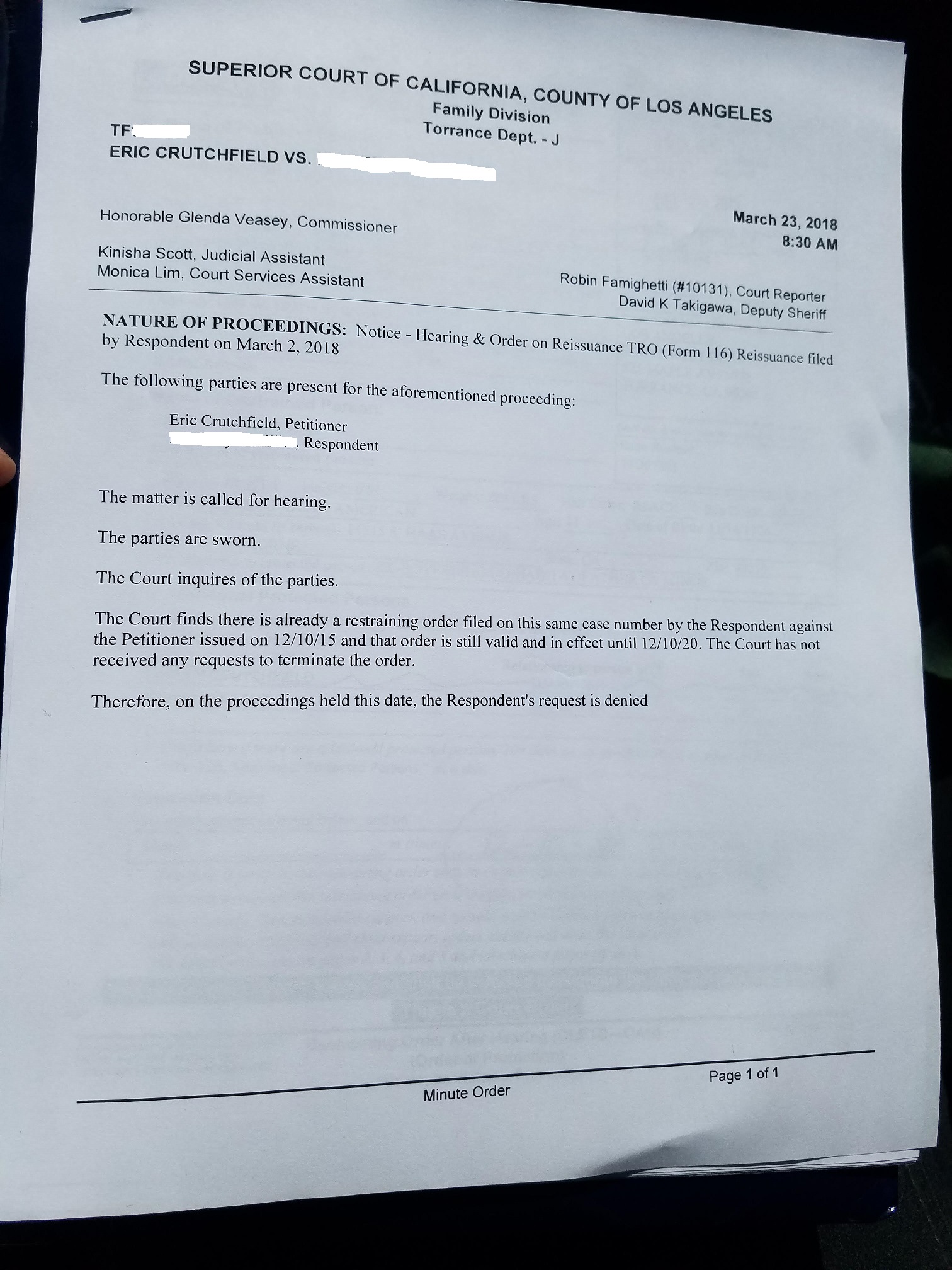 Once leaving court on Friday, Robinson emailed the Minute Order to members of the HPD, including Catano; this writer; a number of other parties, and several officers at the Inglewood Police Department, who last summer had also said that they could not locate the 12/10/2015 restraining order in CLETS when Robinson reported another potential violation on Crutchfield’s part.

Along with the image of the document, Robinson addressed the group in her email (redaction to case number made by The Post & Email):

You now have re-endorsed support to arrest Eric L. Crutchfield for repeatedly violating the Restraining Order issued on 12/10/2015.

When we asked Robinson about the proceedings on Friday, Robinson responded:

As far as the hearing went, I was told before the case went on the record by the Judicial Assistant, that my new request for restraining order would not be granted due to the original order being in place and still being valid. At that time I explained to the assistant that I would need a document (minute order) to memorialize the fact that my order is still valid because Hawthorne Police will not arrest him without it.

When Commissioner Veasey got on the bench she stated that “the restraining order issued on 12/20/2015 is still valid” and that I would not need a new order until the current order expired. I asked if I could speak, she said yes, and then I told the Court that I am in need a of a Minute Order to substantiate the validity of the order. I explained that Hawthorne Police told me that my restraining order was cancelled and that HPD is relying on the termination order found in CLETS. She stated very clearly that “nothing in this Court’s file indicates that this order is cancelled.” I carefully said that Commissioner Padilla signed a document to terminate the order. Veasey said, “Comm. Padilla does not have jurisdiction over this court.” I then told her that I have seen a document that Padilla signed using the Torrance Court’s case number. I said, “Padilla used your case number on her court’s document and endorsed the termination of order” Veasey said, that she had no information related to that. I told her that I had viewed Torrance’s file and agree that it did not exist.

She then instructed the court to issue a Minute Order. She was adamant that my restraining order was always valid and in place.