BUT WILL THEY ACTUALLY INVESTIGATE? 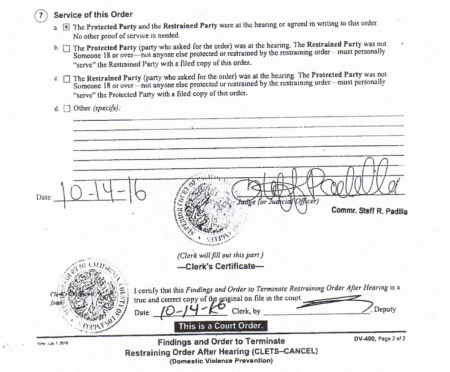 (Oct. 10, 2018) —A Los Angeles mother who lost custody of her toddler daughter through the Edelman Children’s Court last year contacted the FBI this past March after discovering that a permanent restraining order which had also given her full custody was “canceled” by mysterious, off-the-record means.

In February, “Michelle Robinson” spotted her daughter’s father at the commuter station where she boards transportation to and from work each day. In close proximity to her, Robinson believed that Eric Crutchfield’s presence that day was not coincidental and therefore constituted a violation of the restraining order she believed to still be in place.

As The Post & Email has reported in a number of articles on the case, Robinson returned to Torrance Superior Court, where the restraining order was issued on December 10, 2015 for a period of five years. At the time Commissioner Glenda Veasey issued the protective order, she awarded full physical and legal custody of the child, who was then just under a year old, to Robinson.

Crutchfield’s subsequent attempt to obtain some form of custody was unsuccessful.

On December 20, 2015, Robinson wanted to allow Crutchfield the opportunity to see their daughter on the occasion of her first birthday and brought the child to his residence for a brief visit. However, as their daughter slept in her car seat in Robinson’s parked car, she and Crutchfield entered into a physical altercation.  She then left the premises, dropped off the one-year-old with her oldest daughter, who was 20 at the time, sought medical attention for a human bite on her upper arm, and filed a police report with the LAPD in the early hours of December 21, 2015.

An initial referral by the LAPD, based on the officer’s belief that Robinson had violated the protective order, to Los Angeles DCFS resulted in a closed case and no action against Robinson. However, after LAPD detective Sean Horton was assigned to probe her complaint against Crutchfield, he concluded that Robinson was the aggressor in the altercation and reported it to DCFS with the claim that a video of the incident existed. Robinson learned that neither Horton nor the social worker with whom he spoke viewed the video prior to the opening of the second investigation into her parenting ability.

This time, Robinson was told to bring her daughter to DCFS offices, which she did, handing her over to child-welfare authorities. Believing she would soon be returned, Robinson appeared in court with her appointed attorney, Ruben Lopezlopez, who clearly indicated that the court viewed her with hostility.

The child was placed with Crutchfield, who Robinson said has a history of drug abuse and may have knowledge of the circumstances of the murder of a Fonya Wayne Harris in 2003. When he was awarded custody, Robinson said that Crutchfield and their daughter were living in a home which had belonged to his late grandmother in which various extended family members each rented a bedroom. However, Robinson reported that neither Crutchfield nor her daughter had a room to themselves, but rather, slept in the den of the home. As Crutchfield worked the evening shift, Robinson said that her daughter often would spend the night with Crutchfield’s mother or other relatives in what was likely a constantly-shifting situation.

Robinson’s appeal of the custody decision heard in May of this year was unsuccessful.

Robinson had no reason to believe that the 2015 restraining order was not in effect when she spotted Crutchfield at the train station in February. Therefore, she drove directly to the Hawthorne Police Department that afternoon and filed a report of a restraining order violation. When Capt. Julian Catano responded later by email with an attachment appearing to show that her restraining order had been canceled by Edelman Court Commissioner Steff Padilla, she speculated that Crutchfield had likely known about it, while she had not.

By the end of that week, Robinson went to Torrance Superior Court and photographed every document in her file without locating a document canceling Veasey’s restraining order. After she asked Catano where he obtained the document, which was date-stamped October 14, 2016 with Padilla’s name and backdated to April 17, 2016, he responded that his “court liaison officer” provided it to him. 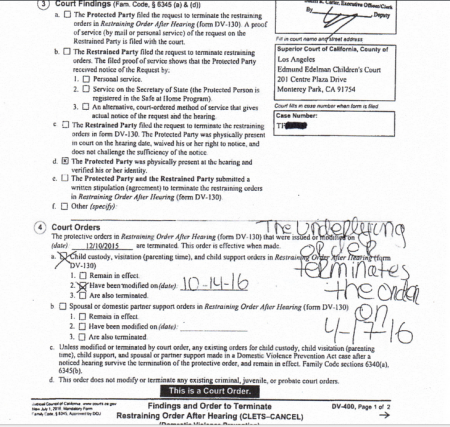 The cancellation document appears nowhere in her child’s Edelman Court file, Robinson said.  Moreover, after Robinson requested a hearing in Torrance on the “canceled” restraining order, Veasey not only affirmed that her 2015 order was still in effect, but subsequently issued a new, five-year restraining order against Crutchfield valid through March 2023.

Robinson has observed that without the alleged termination of Veasey’s order, Crutchfield could not have been awarded custody, since custody was awarded to her by Veasey at the same time as the protective order.

In late March, The Post & Email sent a California public records request to Catano for all documents in his office containing the words “court liaison officer” but received no acknowledgment nor any documents. We additionally contacted Superior Court supervising judge Michael I. Levanas, including the original restraining order and the document which appeared to terminate it, requesting an investigation.

On April 10, 2018, we received a response from Levanas stating that he could not change the decision of a lower judge and, due to California confidentiality laws governing child-dependency cases, he was unable to confirm the existence of Robinson’s case.

Having reported the aberration to the Hawthorne Police Department and Los Angeles Sheriff’s Department, which was also in possession of the “termination” document and relied on it as current information, Robinson turned to the FBI for assistance. Her initial phone calls were met with courtesy, she said, and on June 12, 2018, she followed up by sending a five-page detailed letter alleging that the “termination” of the December 10, 2015 restraining order was a result of a “hearing for show only, to give the impression that due process was taking place.”

She sent copies of the letter to California Attorney General Xavier Becerra, the California Commission on Judicial Performance (CJP), the Edelman Court, and this publication.

Robinson has since received responses from Kevin Brazile, Presiding Judge-Elect of the Los Angeles Superior Court’s Juvenile Division, and Levanas, who is now the outgoing supervising judge.

Robinson is not alone in claiming that Edelman and DCFS social workers are involved in the removal of children from fit parents in an operation which secures funding for foster and adoptive parents as well as the agency itself. The Post & Email previously covered the cases of the Hendersons and the Williamses, both of whom had said they were never charged with abuse or neglect of their children. Rather, these parents said, DCFS preferred to award their children to others who they appear to believe are more deserving to raise them based on the pretext of parental unfitness.

Last week, another case came to our attention alleging that three children were removed from their mother’s care without a warrant and whose adoption is about to be finalized this week. The Post & Email is investigating that case, which also involves Padilla.

On the final page of her letter to the FBI, Robinson referenced the case of Rafaelina Duval, whose attorney, Sean McMillan of San Diego, secured a $3.1 million jury award against DCFS for removing Duval’s then-15-then-month-old son, ostensibly for medical reasons, without supporting evidence or a warrant.

Another California case from 2013 made national headlines and resulted in the prompt return of “Baby Sammy” to his parents, both of whom are immigrants from the former Soviet Union.

Letters sent by this publication last year to Becerra and the full complement of Los Angeles County’s Board of Supervisors have received no response.  California is not the only state in which parents allege that their children have been “legally kidnapped” by child “protective” services. 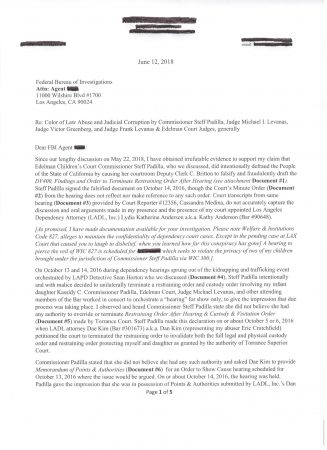 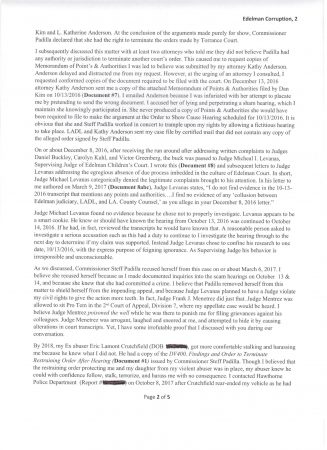 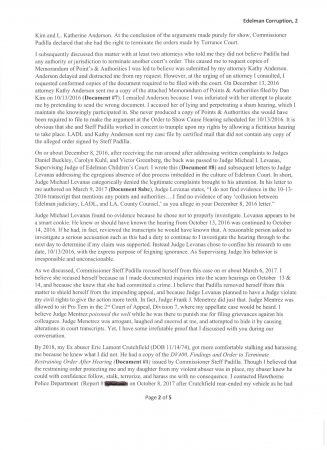 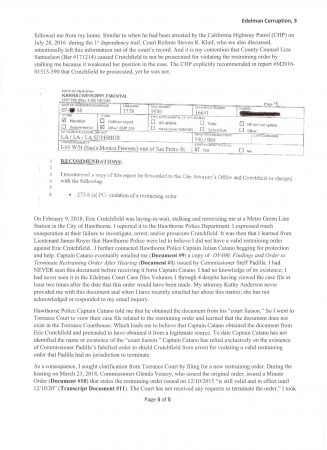 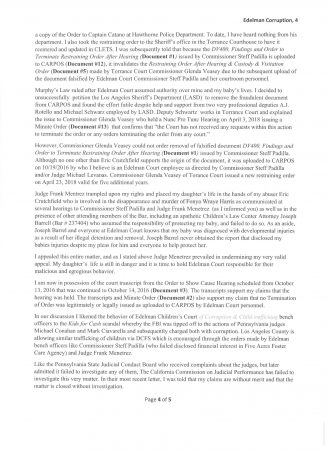 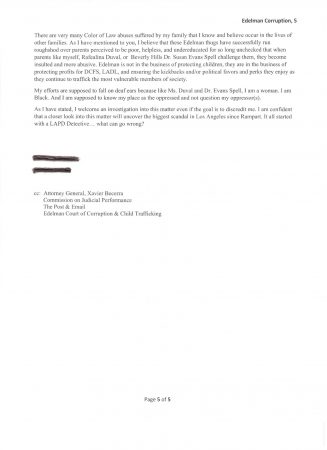 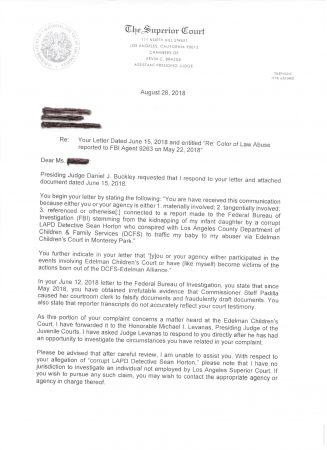 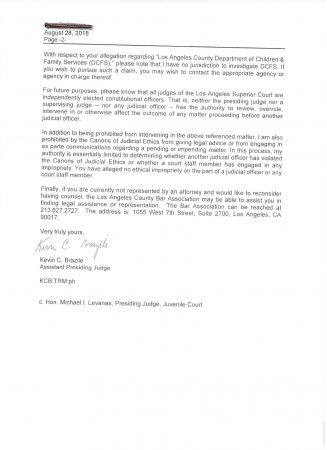 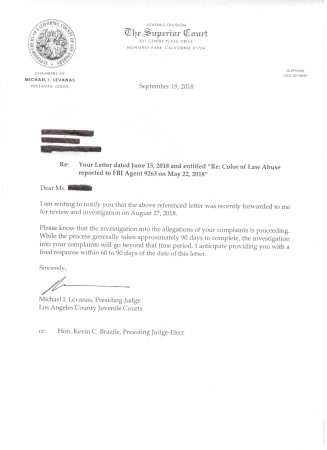