IS CPS TOO POWERFUL? 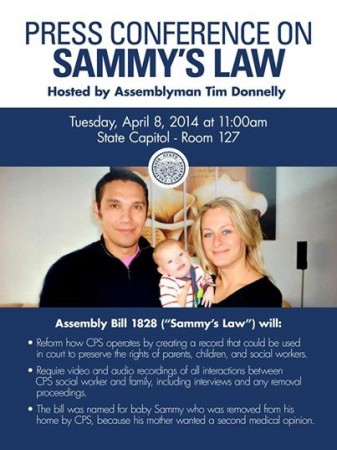 (Apr. 8, 2014) — California General Assemblyman Tim Donnelly will hold a press conference at 11:00 a.m. PDT/2:00 p.m. EDT at the State Capitol to publicize a proposal on which a vote is expected later on Tuesday.

The presser will take place in Room 127 of the Capitol on AB1828, whose purpose is to address the contention that “There are far too many CPS cases that are disputed by the parents who think that the CPS worker’s interpretation was wrong. This simple measure will end these arguments and allow a judge to see impartial audio and visual evidence of the events that transpired and the interactions between the social worker and the family. [This bill] is necessary to ensure that every child who needs to be protected from abuse and neglect is, and that those children who are safe in their home are not taken removed without cause.”

If passed, the measure would require CPS workers to video- and audio-record interactions with parents and children so that they “can be used in court and a decision can be made on visual and auditory evidence instead of pitting social workers against parents.”

Donnelly became involved in California Child Protective Services (CPS) last year after “Baby Sammy” was seized from his parents following a difference of opinion they had with a hospital in which the child had briefly stayed.  After Channel 10 in Sacramento publicized the kidnapping of the baby and coverage quickly reached the national level, questions arose over whether or not CPS followed proper procedure to order police to take him away from his parents, who had sought care at another facility immediately after removing him from the first hospital.

Baby Sammy’s father had described the confiscation of his son as being “under a communist regime.”

California child protective services in Los Angeles (DCFS) has reportedly been the cause of countless numbers of families having been torn apart when capable parents want nothing more than to be reunited with their children.

For 18 months, The Post & Email has followed the story of the Hendersons, whose eight children were taken by Los Angeles DCFS after the parents were falsely jailed.  No neglect or abuse charges were ever leveled against the parents, who have since separated.  The father, Jeffrey Henderson, is now attending law school reportedly excelling in his studies.  Although Henderson has said that he never intended to become an attorney, he wishes to learn how “the system” was able to take his children from his wife and him.

In Massachusetts, a Connecticut teenager whose father said is being used as a medical “guinea pig” has been ordered by a family court judge to remain in Massachusetts CPS custody until she is 18, although her condition continues to deteriorate and it is feared that she will not survive that long.

Donnelly is a founder of a chapter of “The Minutemen” in California and is one of a family of 14 children.