“AFRAID TO SPEAK THE TRUTH” 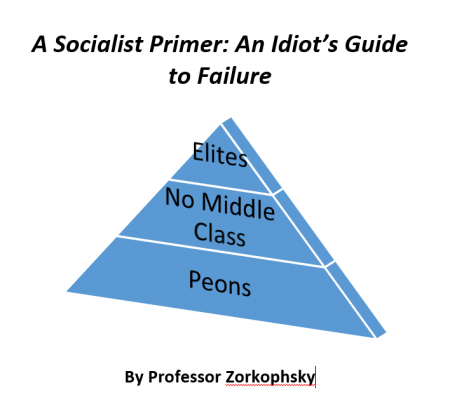 (Nov. 25, 2018) — “Good evening, ladies and gentlemen, and welcome to ‘Pulse of the Nation,’ your one stop for the truth. Hello, my name is Roving and we’ll be interviewing Professor Zorkophsky about his new textbook, ‘A Socialist Primer:  An Idiot’s Guide to Failure.’ Hello, Professor, and welcome to ‘Pulse.’ I understand you’ve yet another bestseller on your hands; what’s this one, number 39?”

“Forty-seven, and please call me ‘Zork’; there’s no need to be so formal among friends. Yes, I’m rather proud of this one; it’s sure to be picked up by every economic survey course around the world; I hope it gets translated into many languages. I like to think of it as my ‘retirement cushion.’”

“Inflation is a terrible thing.”

“Indeed it is. Let me ask you about Socialism.”

“Think of a pyramid, okay? Wrong, because a pyramid has a capstone, middle and a base, where a Socialist’s pyramid has a capstone and the rest of the pyramid rests on the backs of the peons who work for the elite. There is no middle class; ergo, there is no middle-of-the-Socialist pyramid: just the gutter for the laborers and the penthouses for the bourgeoisie. The middle class is an economic and voting power that Obama, aka Barry Soetoro, tried to eliminate through Obamacare, for starters.”

“If Socialism is but a pipe-dream, how come so many people seem to gravitate to it?”

“Because anytime somebody offers something for nothing, the suckers line up for it, that’s why. And it doesn’t make a hoot of difference what’s offered; heck, it could be a velvet-lined casket or a free toenail clipper every July 4th.”

“Is there anything unique about your book?”

“Yes, there is. There’s a list of failed people, people who followed the Pied Piper of stupidity and their bios. We have Fidel Castro and Che Guevara; Jane Fonda and Hillary Clinton; Obama and Paul Ryan, and a host of others, including the newest nitwit, Ocasio-Cortez.”

“Well, the goal is to make money, so you’ve got to give them what they want. You see, that’s the key to success: honesty coupled with the truth will always win in the long run.”

“To use the words ‘honesty and truth’ together sounds a little redundant, doesn’t it?”

“No; you see, honesty may not be the truth, but the truth is always honest. It’s like this: Paul Ryan may honestly believe he has a snowball’s chance to be the president, but truthfully he doesn’t. Or you could say that Joe Scarborough honestly thinks he’s not acting even more Russian Communist than the Russians do, but truthfully he’s trying to make the USA into the image of the USSR.”

“Well-said. The title of your last chapter is quite puzzling: ‘Professor Wert’s Lobotomy Pill.’ That’s really quite disconcerting; what’s it mean?”

“It means that Professor Wert has just recently deciphered some ancient ideographic scripts that illustrate the method of making a pill that makes people, like Robert Mueller, for instance, capable of understanding facts. I’d slip one in Nancy Pelosi’s drink; maybe then she’ll finally admit that her statement, ‘We’ll have to pass the bill to find out what’s in it*’ (0.05), ranks as one of the most stupid utterances ever made by a human being in the last 4.5 billion years.”

“How are the Christmas sales of your book doing?”

“Off-the-shelves, as we expected, so we had our 7th printing as our first printing. It’s all very esoteric, mystical mumbo-jumbo that only people in the book-publishing world would understand, and maybe Madam Shylock.”

“So the people who are anti-Trump are really confused about life?”

“Not only about life, but about everything, and the best example is the obvious absence of Angel Moms on any television show that pushes open borders, amnesty, DACA, anchor babies and caravans. Which is why we don’t see any Angel Moms on The View.”

“In Chapter 30, you say that many mothers lost loved ones by Muslims living in the United States legally, and you talked about this journalist, Jamal Khashoggi, working for The Washington Post, who was an American resident but was also, at the same time, a member of the Muslim Brotherhood. Now I don’t like the Muslim Brotherhood any more than the next guy, but they’re outlawed and hunted for the murderers that they are in other places, so how come they’re given a free pass here in the USA? In Egypt they’d be thrown in prison.”

“The unending legacy of Obama, I’m afraid. Trump should’ve fired every government employee who was hired during the Obama years, and that’s just for starters. And another topic that I discuss is Trump saying that he’d release the documents and throw Hillary in jail, remember? Promises made but not kept. But we’re waiting; nothing else we can do.”

“Is the Islamic strategy of replacing our Constitution with Sharia Law closer or further from being a reality since Trump’s election?”

“No doubt it’s closer; matter of fact, the timeline for Muslim domination of the West has been greatly accelerated because our politicians are as stupid as France’s and England’s. One would think what’s been happening in the Middle East and then Africa and then Europe would eventually come to roost here, and it will, thanks to our own homegrown idiots like our government officials who are afraid to speak the truth where Islam is concerned.”

“Care to be a tad more specific?”

“Simply-put, Islam is a political identity that has our Constitution in its sights and will stop at literally nothing to achieve its goal: that of world domination when every obstacle has been eliminated.”

“Eliminated, you mean as in ‘killed?’”

“Better to have said ‘Put to death’ in keeping with the Sharia tradition. I reference the ‘Beslan School Massacre’ (3:21).”

“Yes ,because the facts are just too painful to cavalierly carry around, so to speak. The horrors committed in Beslan, Russia are too horrible to contemplate, yet every Westerner should be acutely aware that what went down in Beslan is just your normal everyday Muslim way of life for the past 1,700 years. Look, I’d like to talk more about my book and eternal vigilance but I’ve a book signing to attend so I must say thank you for having me on your show. Goodbye.”

“And thank you for being such a gracious and cooperative guest, Zork. And so, on behalf of the crew, I’ll be wishing you all a goodnight: Goodnight.

“Okay, I guess it was alright. Pretty scary about how dumb our politicians are, isn’t it? Leading us to the slaughterhouse, just as the stupid European Union has done to the Europeans. Open borders will be the death of civilization. Hey, it’s burger time: my treat.”

[* Nancy Pelosi: Look, she’s really a stupid person and she’s the best the Democrats can do to be the Speaker of the House? You’ve got to be kidding, but they’re not kidding, are they? We’re really in trouble.]