(Feb. 10, 2018) — “Good evening, ladies and gentlemen, and welcome to yet another round of ‘Pulse of the Nation.’ Hello, I’m your Roving Reporter and, as you can see, we’re back in Cassadaga, Florida, home of one of our most popular regular contributors, none other than Madam Shylock. Hello, and thanks for inviting us down. What do you have for us? Excuse us while we break for a commercial.”

“First, let’s see the money. I don’t take checks or credit cards: cash on the barrelhead only and, yes, I’m well-protected with a number of devices, the least of which is this here lightweight .357 Magnum revolver, equipped with its own laser sight, see?”

“And I have a foolproof early warning system, too. See those birds?”

“Those and the squirrels are part of my daytime alarm and I’m not going to reveal my nighttime alarms, but nothing, but nothing, can sneak up on any of us. Talk about a Neighborhood Watch; what you’re looking at is the very first and the very best.”

“Any dogs? Let’s say we break for a commercial.”

“A few: Rottweilers don’t bark: they just sneak up and throttle.”

“Remind me not to do any Trick or Treating.”

“We discourage that kind of disrespectful shenanigans in these here parts.”

“Yes, I bet you do. Look, we understand that you’ve treated, or helped, a number of our Veterans suffering from PTSD. Care to elaborate a little for our viewers?”

“Aren’t you forgetting a little something? Little green pieces of paper called ‘money?’”

“Here’s an even thousand; that should cover it. Excuse us while we break for a commercial.”

“It does and thank you. Okay: you want to hear about my nut cases; the over-the-edge and on-the-brink cases, now don’t you?”

“Yes, of course, but could we please use accepted mental-health clinical terminology?”

“But those are the words that professional psychiatrists use; don’t you read Professor Zorkophsky’s books on the subject? I thought he was a friend of yours; surely he gives you a discount, wholesale prices and all.”

“Yes, as the good professor says, ‘Never be a sucker and pay retail!’”

“Yes, I believe I read that in one of his books. Getting down to the nut cases, I have one from World War II and how they dealt with PTSD back then by starting ‘Drink Clubs.’”

“‘Drink Clubs?’ Excuse us while we take a commercial break.”

“Excuses to gather and talk about their military experiences with the underlayment of actually doing some good for the community, like paying for eyeglasses for poor kids or burn centers for children, all the while addressing their PTSD.”

“Easy: hanging out with like-minded people helps them cope with everyday life, that’s how. Korean Vets participated also. Not so much the Vietnam Vets, who really got the shaft from the citizens of the United States who blamed the soldiers for the war strategy of the government. Heck, it wasn’t the soldiers’ fault our Department of State was afraid of the Chinese, was it?” 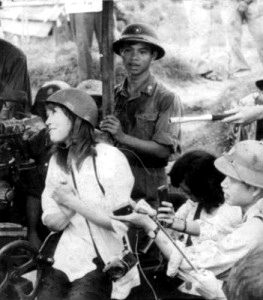 “Something Hanoi Jane never figured out.”

“And never will. I got this Vietnam Vet who told me that it took him 20 years before he became relaxed enough to believe that he was not really living on another planet and that he was being constantly spied on, even while sleeping. Now he was a real nut case.”

“When do you make appointments with these nuts? Excuse us while we take a commercial break.”

“The really off-the-wall ones make their appointments at 3:00 in the morning.”

“And you see them then?”

“Have to, because that’s the only time they feel comfortable enough to come in.”

“But what about the VA?”

“Don’t make me laugh. They get sent to a shrink and before they know it they’re told, ‘Sorry, time’s up, kid. Don’t let the door hit you on your way to the pharmacy to pick up your Zombie pills.’ And then when they get hooked on the pills they either can’t get a refill or they’re not allowed to get WEANED OFF the ones that the shrink hooked them on in the first place.”

“I had one that would hide in the bushes behind his house, his M1 Garand loaded for bear, from like 1:00 to 5:00 in the morning, and he’d bring his gun with him.”

“So are you helping these dudes?”

“All they want is someone to talk to, so that’s what I do.”

“I have a sign that says, ‘Pay whatever you think is appropriate.’ They all pay, by the way.”

“Is there hope for them?”

“Always, and that’s what I tell them, ‘Second Star to the right, and straight on till morning.’ Sad cases, I’m afraid to say. But I do what I can. What’s really sad is how a lot of the girlfriends and wives treat the guys with their very real problems. Look, these girls think like if it’s not in the ‘Cinderella’ story, they don’t have to deal with it, so they lie and cheat.

“But let me say one more thing about these Vets who suffer from PTSD. It’s true they may have relationship problems, but make no mistake about it; the oath they took to serve, defend and protect the Constitution of the United States is very dear, very real and very clear to them.

“I don’t want to make this sound like a threat; all I’m saying is that I’d walk on eggshells if I were a millennial (or anyone) either attempting to subvert the Constitution or supporting any infraction of the Constitution to overthrow our legally-elected president. Many of our Vets are up there in years and many have deadly diseases, such as cancer, and may wish to continue to be a service to our country before their lives end. I don’t know how to make it any clearer than that; at least that’s my take on the mindset of some of my clients. I hope I expressed that sentiment succinctly enough to be easily understood.

“And one more thing: our military would be proud beyond belief to march in a parade. Many of my clients were never so honored, and they all regret that they never had the chance.”

“We understand 100%, and with that I’m afraid, on behalf of the crew, that it’s time to wish most of you a goodnight: Goodnight.

“Good show. Hey, Madam Shylock, join us for a burger: my treat.”