“WHERE DID MY TAX DOLLARS GO?” 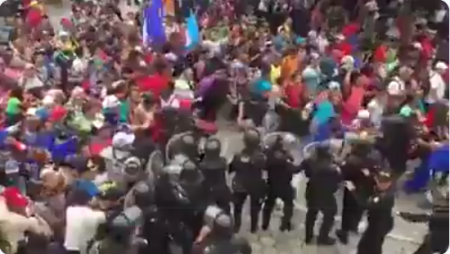 (Oct. 20, 2018) — “Good evening, ladies and gentlemen, and welcome to ‘The Pulse of the Nation,’ the place where the truth prevails over the tall tales as told by such questionable truth-sayers as, well, you all know the ones I’m talking about, don’t you? Of course you do; we’re not in school anymore and we all know that the party of JFK really died when Barry Soetoro, aka Obama, usurped the presidency without a valid BIRTH CERTIFICATE. Hello, my name is Roving and we’re here at the ‘Ain’t It A Kick?’ shooting range just outside of town to interview a bunch of women who are on a righteous crusade to set past wrongs right. Did I say that right? With me here is Daphne who is, sadly, an Angel Mom. Hello, and what brings you out here so early?”

“Excuse me, Roving, while I empty this clip on my make-believe bad guy that’s trying to get away.”

“Is that target backwards?”

“No: it’s forward of the backside of an illegal immigrant that has no business in my country and, as a legal citizen, I’m exercising my Constitutional rights by protecting my country and blowing him away.”

“Was that drunk illegal immigrant armed when he ran the stoplight that killed my seven-year-old daughter? Why do they always have to be armed? It’s too late if we deal with them after they murder one of us. This armed bologna doesn’t cut it, does it?”

“No, it doesn’t; not in the least. So I see there’s a bunch of you here. Are you all Angel Moms?” 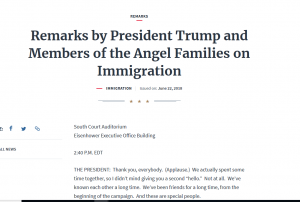 “We’re Angel Families; dads; brothers and sisters; aunts and uncles; cousins and betrothed; friends and neighbors; whole communities mourn when one of us is MURDERED SENSELESSLY.”

“If you haven’t lost a loved one through the willful negligence of the United States government, then you don’t have a clue how we feel. It’s as if my government took all of my tax dollars, put them in a pile in front of me and set it on fire. So where did my tax dollars go if not to protect my daughter? Isn’t my government supposed to protect us? You think the Democrats want to protect us? They don’t give a hoot about America; I mean, they support DACA and these DREAMER scammers.”

“So, Daphne, how many are in your group?”

“We have 45 Moms and 5 Dads; the ‘Dads’ are the ones who lost their wives. We had a picnic last Saturday and we had over 200 attend. Lots of crying, but it’s ‘Mental Health Vaccination,’ according to Professor Zorkophsky’s new book, ‘How Bad is it when You Can’t Tell Who the Bad Guys Are: Your Elected Representatives or the Illegal Immigrants?’ It’s a pretty good book; matter of fact, it’s our go-to security blanket when we feel frustrated beyond belief about the colossal waste of innocent lives.”

“So, what, you come down here to relieve stress?”

“Are you kidding? No, we’re here because we don’t want any collateral damage. Let’s say you just left the grocery store and see a purse-snatching. Well, you don’t want to hit an innocent bystander, do you? So we practice to become Expert Marksmen. Let’s say a low-life illegal immigrant (redundant?) carjacks and starts to make a getaway. In that case we may want to hit the front right tire so the car veers into a concrete base for a light pole. Martha, who is shooting next to us, has a target of the rear of an SUV. She’s aiming for the Achilles Heel: that one area where a direct hit will make the gas tank explode.

“That’s very good. How long has your chapter been practicing?”

“Some of us have been here five years, but it varies. It helps to relieve tension, you understand.”

“Now that I do understand. What would you say to President Trump if you had the chance?”

“Thanks for talking with us, Daphne. So now, through the magic of editing, we’ll break for a commercial and the next time you see us we’ll be back on our corner across from the railroad station.”

“And here we are, back on our beat. Excuse me, Miss, Roving, here for ‘Pulse’; care to answer a question for us?”

“Who are this ‘us?’ I see you and the girl with the microphone that looks like a stuffed squirrel she’s holding over my head; who else? Oh, that cameraman. ”

“And let’s not forget our stalwart and dedicated viewers, and if they can’t get us on cable they can read a transcript of the program in The Post & Email.”

“So how many does that make? What, cat got your tongue? I know: the number of viewers is directly proportional to how much you can charge your advertisers. So, how much do you make, standing out in the rain and cold, or the wind and the heat, day after day?”

“State secret, but it’s not as much as you’d think, or I’d like. There’s something to be said for volunteering for community service. Let’s go to a commercial.”

“Okay, we’re back. So, what’s your name and your pet peeve?”

“My name is Joan and my pet peeve is voter ID. It’s not, like, complicated: if you don’t cheat, what’s the problem?”

“They say it targets the poor and the ‘Disenfranchised.’”

“Oh, really now. Think about it: if the so-called ‘poor and disenfranchised’ are so put out by an ID, then maybe they shouldn’t be allowed to vote in the first place. I mean, shouldn’t you have to be able to read and speak English, or is that asking too much?”

“You’re preaching to the choir.”

“And here comes my train, but if I see someone voting twice, or an illegal immigrant voting, I’m going to say something and if I don’t like the response, maybe the Democrats ought to be able to take some of their own medicine, you think?”

“Definitely. And here’s your train. Thanks for talking with us. Let’s break for a commercial.”

“Hey, Roving and crew. Just got back from the dog park where I saw that Vietnam Vet and the Talking Dog.”

“The dog went on to say that the swamp is deep and wide. And these unbalanced tariffs? How do you expect our crooked congressmen and women to make any money if Trump derails the kickback gravy train?”

“Did the dog have anything else to say?”

“Only to go ahead and schedule the dog and the General together sometime. The dog wants to lay a few facts that went down in Vietnam in 1965 that maybe the public wasn’t privy to.”

“Sure thing. I’ll set it up ASAP. And now, Molly, our sound-boom operator, is signaling me that it’s that time for me to say thanks for watching and, on behalf of the crew, have a goodnight: Goodnight.

“Hey, let’s call the General and have him come down. Maybe we can have them together at the dog park. Burger time: my treat.”