WILL SHE ENFORCE HER OWN ORDER? 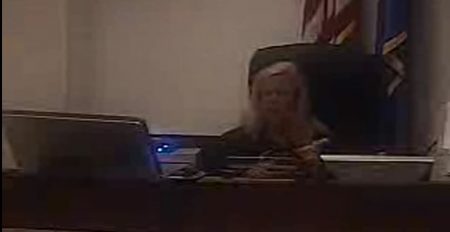 (Oct. 17, 2018) — The Post & Email has learned that an evidentiary hearing concerning the custody of two Las Vegas boys is scheduled for Thursday, October 18, 2018 at 1:30 p.m. PDT with Judge Sandra Pomrenze presiding.

Following a July hearing, the next scheduled session in the case was originally docketed for December 28.

Pomrenze is a Family Court judge in Nevada’s Eighth Judicial District, which includes the Las Vegas metropolitan area.  Over the summer, a number of complaints were presented to this publication about Pomrenze’s behavior in the courtroom and her decisions on child custody.  Pomrenze has been known to make racially-insensitive comments from the bench and accused by several petitioners of bias against one parent or the other.

The case of the two boys involves the drowning death of their youngest brother in 2015 for which their mother accepted a “guilty” plea through the District Court and Child Protective Services.

The hearing was scheduled as a result of the father’s having filed petitions asking that Pomrenze’s order that he receive visitation at his home three weekends a month be enforced.  With the exception of last weekend, the boys’ father, Burke Hall, reported that he did not receive visitation since July because the children were not present at the designated time and location of the expected exchange on Friday afternoons. Additionally, however, Hall was in the hospital for approximately six weeks.

Over the summer, two petitioners with cases in front of Pomrenze informed us with documentation that their cases, which involve guardianship, were reassigned from Pomrenze to another judge.  The Post & Email was unable to discover whether or not all cases involving Pomrenze and guardianship were transferred.

Last month, The Post & Email reported that the mother and another relative of a 13-year-old Las Vegas boy believe he is in imminent danger as a result of Pomrenze’s assigning of custody to his father, who has a history of alcohol and drug abuse as well as domestic violence against the boy’s mother.  Thus far, the mother has unsuccessfully sought to transfer her case to another judge, believing Pomrenze to be biased against her.

In another situation, Pomrenze indicated in final custody documents that a father accused of statutory rape but imprisoned on a lesser plea continues to share “joint legal custody” of the couple’s youngest minor child.