HOW MUCH DAMAGE HAS BEEN DONE?

(Sep. 16, 2018) — The mother of a 13-year-old boy whose custody was assigned to his father years ago recently told The Post & Email that she fears Nevada Eighth Judicial District Judge Sandra Pomrenze does not have his best interests in mind given that her ex-husband has had mental-health and alcohol issues requiring institutionalization and professional monitoring.

The parents, who divorced in 2005 when their son was an infant, now live in different states at considerable distance, with the father having remained in Las Vegas for the majority of the time.  The mother, who we will call “Susan,” said she was sued for divorce by her then-husband after she left their son in the care of her mother to visit relatives outside the country for a month.

Since 2015, Susan has been fighting for her son’s custody arrangement to be changed.  A relative of the father’s who initially advocated for his maintaining custody participated in our 90-minute interview with Susan, providing eyewitness accounts of a number of incidents in which she said the father, who we will call “Joe,” exhibited inebriation, violence or both.  She is now a strong supporter of Susan’s attempt to gain custody.

Susan told us that her now-ex-husband was physically and emotional abusive to her throughout their relationship, which began after she visited the U.S. from her home country.

After he first learned she was pregnant, she said, he urged her to terminate the pregnancy.

“I came to the United States on a visitor’s visa when I was 19,” Susan told us.  “After a time, I received a letter from Immigration saying that they wanted me out of the country.  He married me because I was already pregnant and I wanted to have the baby.”

Joe’s relative told us that after Susan “saw the heartbeat, she said ‘No’ to an abortion.  He threatened her millions of times to do whatever he wanted or face deportation,” the relative continued.  “She was harassed and threatened from the first day.  She offered to leave and have the baby in her home country; that was when he said, ‘No, you need to have the baby here.'”

“There were so many times the police came over,” Susan said.  “One time when he was drunk, he broke a bottle and cut his chest.  That time, I had had enough and called the police.  I was so tired of him hitting me; that’s the day he beat my head so badly that I became dizzy to the point where I seriously thought I was going to die.  The police knocked on the door and my ex-husband said, ‘Before you open this door just be very careful of what you say.  I’m sure you don’t want to sleep in jail tonight.’  Then he laughed. ‘If you open your mouth and say anything, I promise I will tell the cops that it was you that cut me,’ he said.  Of course I didn’t say anything; I was too afraid of him.”

“My mother came to the United States to care for my son, and she was with him the entire time I was gone.  My husband never really took care of him,” Susan said.  She also recounted an incident when after her husband had beaten her, he threatened both her mother and her with, “‘You are both illegal.  If you’re going to call the police, I’m going to call Immigration right now and you’re gonna get deported back to where you belong.’  My mom called the police, and they showed up, but when they did, my mom said, ‘I’m sorry; I don’t speak English.'”

“Her mom was frightened at the idea of having to leave the country with her daughter and grandson alone with him,” Joe’s relative said.

“He kicked me, my son and my mother out of the house at 1:30 in the morning and we had to stay in a hotel,” Susan recalled.

On another occasion, she said, when her husband was out of work, they moved to the state where Susan now resides, where her mother had moved.  Susan was working to support her husband and son.  When he was offered another job in Las Vegas, they took advantage of it and returned.  However, Susan said, her husband’s performance was marred by his drinking and soon designated for non-renewal.

“Because of his drinking problem, they didn’t want to renew the contract,” Susan said.  “At that point, he came to me and said, ‘Do you want to be in [out-of-state city] supporting us, working at night and with your son in [state], or do you want to keep this lifestyle?”  I said, “For my son, I would do anything and everything.  What do you want me to do?” and he said, ‘I want you to sleep with the contractor of the show, and the contract will be renewed.’  I did it, and the contract was renewed.”

The relative said that on February 3, 2015, Joe “was rushed to the ER because he was not feeling well for all he had drunk mixing with drugs. He was recommended not to leave the hospital because he would risk his life being suicidal but he signed to be released and left the ER.”

A second incident three days later occurred after Joe held a gun to his father’s head, as well as his own, the relative told us.  “Joe’s father called the police and Joe was arrested and after stating that he wanted to kill himself, and he was brought into a mental institution.”

Following these incidents, Joe was in a drug and alcohol rehabilitation facility outside of the country for approximately nine months, a stay arranged by the relative who spoke with us.

During the time his father was institutionalized outside the U.S., the child lived with his maternal grandparents and Susan and reportedly began to do well in school, something that had been lacking previously.  Susan provided documentation of her son’s disenrollment from Las Vegas schools and enrollment in the school in her home state.

Susan said she did not ask for a formal custody change at the time because she was unaware that her ex-husband was in rehab.  Rather, she and Joe’s relative said that Joe had informed his ex-wife and son that he was temporarily employed overseas and would return soon.

After discovering that Joe had in fact been an inpatient in a drug/alcohol rehab facility, Susan’s mother and stepfather filed for guardianship of the boy in their state of residence, after which an unsuccessful hearing was held.

Joe’s relative is now gravely concerned for the child’s safety.  After Joe was discharged from rehab, the relative shared a household with his son and him with the hope that he was a changed man.  However, the relative said that during that time, she witnessed an array of girlfriends and drugs entering the home, noise late into the night, and bizarre behavior on Joe’s part, making it difficult for his son to be sufficiently rested for school the next day.

In one instance, Susan and Joe’s relative reported, while living with the relative, Joe “had brought home different women and would lock himself in his room.  One day while he was under the effect of alcohol and drugs he shot a firearm regardless of his child in the house.”

An order issued by Pomrenze on May 27, 2018 scheduling a July 23, 2018 evidentiary hearing for a change in custody arose after the father, according to a motion filed by the mother’s attorney, “represented to the Court that the minor child, XXXXXXXXXXXX born XXXXXXXXXXX, was at home with a 102 degree fever and strep throat, that he had taken XXXXXXXXXX to the doctor at the Quick Care located at XXXXXXXXXX and XXXXXXXX, but XXXXXXX was not on medication.”

The order further reads that if it were found that the father left the medical condition untreated, “it is very possible that custody can and will be modified and further that Plaintiff will be responsible for attorney fees and costs relative to said modifications as well as possible sanctions for contempt.”

The judge also stipulated a visitation period of May 26 to July 22, 2018 with Susan and her parents, with Susan to pay for her son’s travel costs.  The visit took place, Susan said, although she was alarmed at what she said was bizarre behavior displayed by her son, causing her to be more determined than ever to obtain an order granting her custody.

After it was discovered that the father had not been truthful with the court about his son’s having been ill, Susan said that Pomrenze did “absolutely nothing.”

Late last month, Pomrenze conducted a trial hearing on Susan’s request for a “relocation” of her son to her state of residence which culminated in a continuance until February.

Susan must travel to Las Vegas for each hearing, a point her attorney raised during the recent hearing, with a request for her client to appear telephonically denied by Pomrenze.  On the closed-circuit video produced by the court, Pomrenze said that Susan will be expected to testify at the next proceeding and must therefore appear in person.

Pomrenze further stated that she would reserve “a full day in January” for that hearing, after which the father’s attorney is heard and seen on the video stating, “The 13th is my birthday; I’m just saying that.”

Pomrenze then suggested January 4 for the next date, which also was not workable.  February 8 was ultimately set.

The mother’s attorney stated that the boy missed “90 days” of school last year, after which Pomrenze said she “would  like” to see his grades.  His attendance this year is irregular as evidenced by a three-month report from the school: 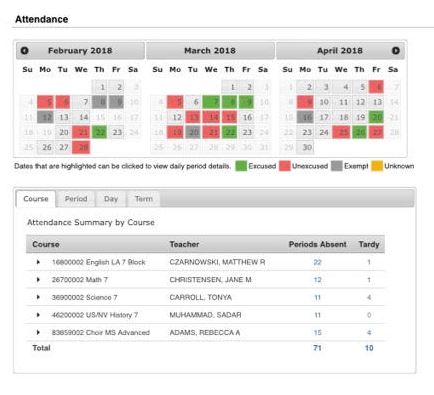 Joe’s relative told us, and Susan provided to us a copy of a restraining order which the relative, and a relative of hers, obtained against Joe last year.  That documentation, as well as a sworn statement from one of Joe’s adult children from a previous marriage declaring Joe “not fit” to care for his son, were provided to Pomrenze prior to the July 23 hearing. 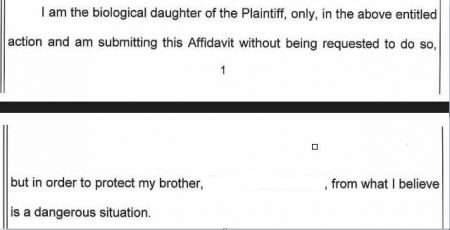 The relative who arranged for Joe’s rehab testified at the July 23 hearing about the “terrible” example Joe had set for his son, according to Susan’s attorney.  Earlier this year, Susan’s attorney contended in an email that Joe had done “failed to do anything that she [Pomrenze] ordered.”  That order included taking his son to counseling and wearing a SCRAM device to monitor his drinking.

“Not only did Judge Pomrenze not look at all the evidence provided to her by witnesses, but she also refused the immediate relocation of my son,” Susan said.  In another downturn in events, following last month’s hearing, Susan’s attorney withdrew from the case.  “She said I would never win it and that she was no longer my attorney, leaving me in shock,” Susan said.

Susan said that when she retained the attorney, she was unaware that as a former Family Court judge, she was removed from her elected post by the Nevada Commission on Judicial Discipline for reportedly having conducted her own investigations without attorneys present and hiring her cousin in a professional court-related capacity without revealing the relationship. “By the time I discovered she was removed from the bench, I had already hired her on someone’s recommendation,” Susan told us.

Regarding Pomrenze, Susan said, “I don’t understand why she has left my son with an alcoholic with so many issues. He has missed so much school.  It is the worst situation for him to be in.”