(Jul. 15, 2018) — A Las Vegas judge who asked if a multiracial child’s hair is “nappy” during a recent hearing became the subject of an article published by The Las Vegas Review Journal early last month.

Although an entry exists for her biography at the court’s official website, it contains no information for members of the public.  The Post & Email is therefore relying on Ballotpedia for relevant facts, although links from the overview now lead to error messages.

Pomrenze’s suggestion that the parents of the multiracial child take her to a specialized hairdresser was followed by her articulation of an “expletive” which she said she “couldn’t resist” uttering from the bench.

How or why the topic of the girl’s hair captured the judge’s attention is as yet unclear.

After the child’s mother, who is multiracial, filed a request for Pomrenze to be removed from the case alleging racial bias, Chief District Judge Elizabeth Gonzalez issued an opinion in which she stated, “While Judge Pomrenze’s comments about the texture of the child’s hair are certainly insensitive, no showing has been made of any lack of impartiality or improper conduct,” as reported by The Review-Journal.

In another case, Pomrenze ordered the custody of two young multiracial boys to remain with their mother, Vanessa Loftis, who is white.  The father, Burke Hall, is black, along with several other heritages.  Loftis is currently 37 and Hall 57.

In 2016, Loftis pleaded “guilty” to charges brought by Clark County Child Protection Services and the Clark County district attorney, respectively, of “child abuse, neglect or endangerment” stemming from the drowning death of the couple’s third son on August 3, 2015.   Loftis was present at the time of the two-year-old’s drowning in a hot tub adjoining a property swimming pool while Hall was at work. 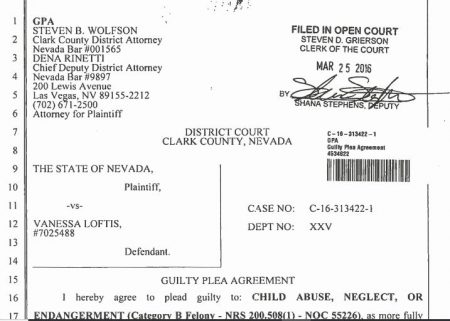 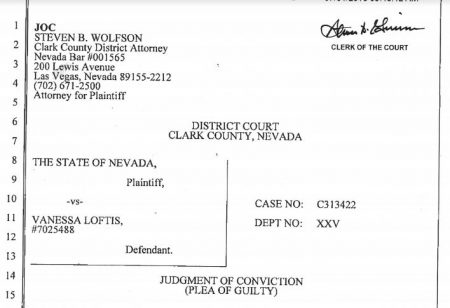 CPS also accused Hall of neglect despite his absence from the scene.  On three separate occasions, representing himself, Hall prevailed over the agency’s allegations against him.

As a result of the plea agreements, Loftis was given a suspended prison sentence of 24-60 months, probation of up to five years, and a mandate to undergo a mental health evaluation.  She received services from the VA, records show.

Following the first plea but prior to the second, Pomrenze rhetorically posed the question to Hall as to whether or not he should remain in the same home as his estranged wife in order to keep the children safe.  “There’s no cutting off the defendant totally from those kids; bear that in mind,” Pomrenze said.  “…I appreciate the tragedy that happened to your little one.  I know all that…but I can’t deprive the defendant of all of her rights.”

She further advised Hall to speak with an attorney or to “talk to somebody at your church…you’re asking me for life advice, and that’s not what I do” after Hall stated that he wished to divorce Loftis.  “I don’t get it,” Pomrenze told Hall, to which he responded, “I can help you get it.”  “No, you can’t,” Pomrenze retorted, “’cause you did your best to try, and I just don’t think you know what you want.”

Both parents are U.S. Army veterans, although they did not meet there, Hall said.  In a lengthy interview on Saturday, he told us that he knew Loftis, who was then married to someone else with whom she had five children, from church. He said that in 2007, Loftis claimed she was being beaten by her then-husband and had nowhere to turn.  “She was in the hospital for 2½ weeks and claimed that it was from being beaten, but I found out later that it was due to an existing unrelated medical problem,” he told us.

Believing her to be in danger, he said, he rented a five-bedroom home to provide a safe haven for her and her five children.

Initially, Hall told us, he lived out of his car so as to prevent the appearance of any impropriety between Loftis and him while she sought a divorce. He said that later, at Loftis’s invitation, he moved in to the home, where his relationship with her deepened.  “It was a strange situation,” Hall recalled.  “The doctor had told me I could not have children, and I figured I’d help out.”

The relationship was thereafter clouded with instances of domestic violence, Hall said, on Loftis’s part, as evidenced by a Las Vegas Metropolitan Police Department (LVMPD) report dated August 21, 2009; photos of Hall’s injuries; an affidavit from the photographer stating that the photos taken were of Hall; and the medical treatment Hall received afterward. 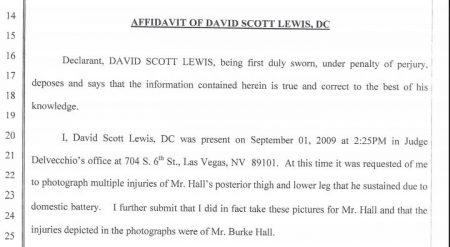 Since at least 2012, the LVMPD has received scrutiny from the U.S. Justice Department to determine whether or not it engages in excessive use of force or harbors bias against blacks in the community.  An incident involving Seattle Seahawks player Michael Bennett last year in which he was apprehended by LVMPD officers but ultimately not charged with any wrongdoing again raised questions about racial bias.

Within that context, Hall described the circumstances of the August 21, 2009 incident in which he said Loftis began beating him, then grabbed their then-seven-week-old infant from his arms.  At that point, he said, Loftis shook the baby and “snapped my son’s neck back so hard that momentarily he stopped breathing and moving.”

Hall called 911, and the LVMPD responded.  “In fact, they tried to arrest me, and I was the one injured,” he said. “I was holding the baby while she was kicking me in my kidneys, and she grabbed the baby and snapped his neck back.  They came for the baby, not for me.” 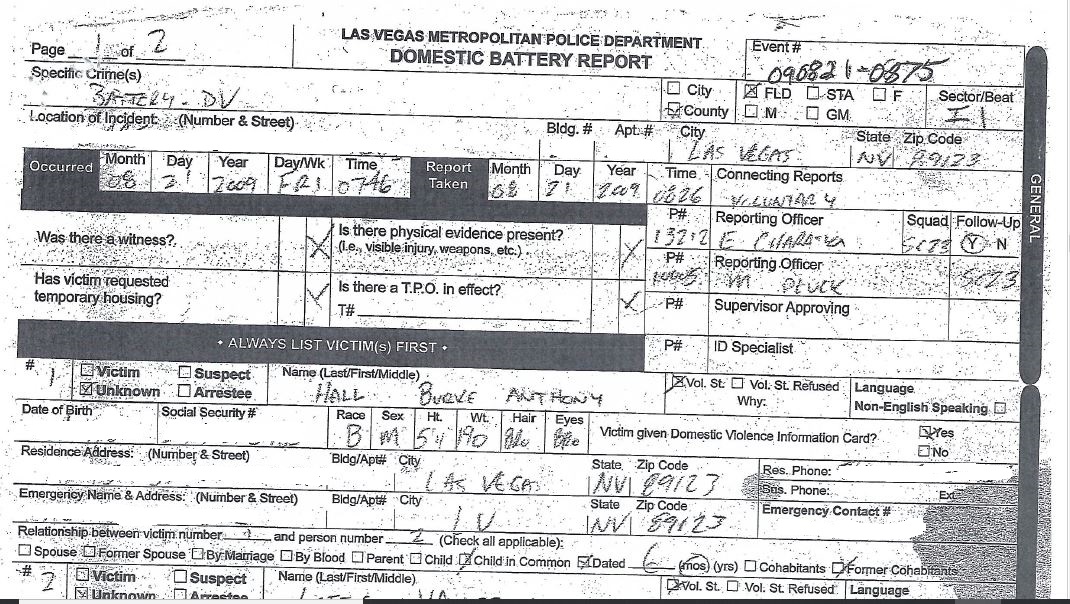 The Post & Email has redacted personal information from the police report.  Hall told us that his height and weight were misrepresented by the LVMPD; photos and video show him to be a small-framed man less than the stated 5’11”. 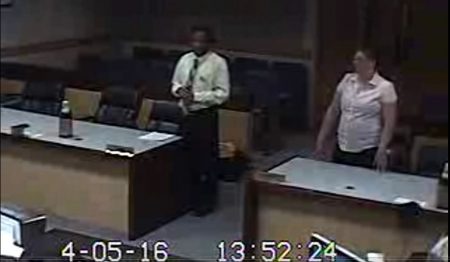 When The Post & Email asked when he and Loftis wed, Hall replied, “She had my son; she swore she would never do it ever again.  She realized I was a good man and a good husband.  After she was pregnant with our second son, the symptoms disappeared.  But after he was born, I had to take them out of state, because she walked them for seven miles in 28-degree weather when they were sick so she could hang out with her friend.”

Further, he said, “I told her that I would not marry her until she got help and started taking her medication for her issues.”  He added that one of her other five children began “beating on” his son.  When we asked Hall why his relationship with Loftis continued, he replied, “Judge Sandra Pomrenze said in court that Mom was going to get custody of my kids.  I knew that the only way I could keep my son safe was to bargain to make a deal, and the deal I made was this:  she was to sign full legal and physical custody of my son over to me, so that way I could protect him in case something went wrong.  ‘If you do that, I will stay, barring any type of mental-health incident that ever happens again,'” Hall said he offered.

When we asked why Pomrenze intended to award Loftis custody, Hall responded, “I believe it’s either strong gender or racial bias or both.  Judge Pomrenze has a very unique and weird slant.  Now that there is a bunch of people coming out of the woodwork, we see it clearly:  if there’s an interracial marriage, she will go against the minority every single time, whether it’s the woman or the man.  ‘You with your nappy hair…’  And this is Pomrenze on her best behavior.”

Hall believes he has been discriminated against by child-protective services both in California, where the family lived for a time, and in Nevada, because he believes in reading Scripture to his children.  “As a Tea Party guy, I look at government as the worst thing on Planet Earth,” he told us.  “The reason I do is that they’ve demonstrated, time and time again, that they can’t even run the DMV correctly.  Government health care — the VA — and Judge Pomrenze’s inaction contributed to the death of my son.”

A report reviewed by The Post & Email indicates that Loftis spent five days in jail after Israel Hall’s death. The two older boys were placed in a foster home with two homosexual men, Hall reported. He said the children shortly thereafter began exhibiting strange behavior and that they were sexually abused, a reference to which exists in a medical report.

As a result of an escalating series of events involving Loftis’s eventual homelessness, Hall said, the five children from her first marriage are now residing with their father in another state.  Conversely, and despite Israel’s death and Loftis’s two guilty pleas, Pomrenze awarded her sole legal and physical custody of the two remaining boys.

Hall has further been denied all visitation and parenting time based on what he described as the perpetration of a “cover-up” on the part of the LVMPD, Child Protection Services, and a guardian ad litem appointed by Pomrenze.  He said he fears for his sons’ safety and that CPS is currently believed to be investigating a report that his older son was hit over the head with a toaster by his mother.

He has not seen either of the boys since March, he reported.

“I have been let down by every single segment of society,” Hall said.  “The VA does not take care of its patients.  They will not diagnose mom with what her real problem is.  We were in court with Judge Pomrenze, and mom said, ‘I’m going to split the remains of our son in half.’  On a knee-jerk reaction, without thinking about it, Pomrenze said, ‘I don’t even think that’s legal.’  Then she turned around and caught herself and said, ‘Yeah, Mr. Hall, that’s the choice you have:  split the remains in half or give the remains to her.  Which one is it, Mr. Hall?’  That was said on the first anniversary of our son’s death, August 3, 2016.”