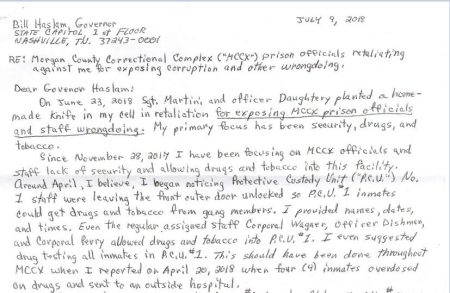 (Jul. 14, 2018) — A copy of a letter sent to Tennessee Gov. Bill Haslam by inmate Grenda Ray Harmer, #88710, alleges that two correction officers at the Morgan County Correctional Complex (MCCX) created the appearance that he was concealing a weapon in his cell.

On June 29, The Post & Email reported, based on a letter from Harmer, that he had been the object of a “shakedown” in which he was accused of harboring a “sharpened toothbrush” under his mattress, an allegation he denied.  In that letter, Harmer wrote, “They’ve set me up. They’re done this to retaliate because I won’t stop exposing MCCX staff wrongdoing” and “they may do something to me.”

The subject of the two-page letter to the governor, dated July 9, 2018, reads, “Morgan County Correctional Complex (“MCCX”) prison officials retaliating against me for exposing corruption and other wrongdoing.”  The writing alleges that two correction officers “planted a homemade knife in my cell in retaliation for exposing MCCX prison officials and staff wrongdoing.“

As stated in the second paragraph, for months Harmer has been reporting that lax security measures in the protective custody (PC) unit of the facility are allowing illicit drugs and tobacco to enter the PC unit with the knowledge of correction staff.  As a result, Harmer reported in April, four inmates were rushed to the hospital after overdosing, a claim about which Tennessee Department of Correction (TDOC) spokeswoman Neysa Taylor declined to comment.

In the past, Taylor has termed Harmer’s information “fictitious.”

MCCX’s PC area is known as “Unit 1.”  “Population” refers to “general population,” or those not in protective custody or segregation.

In March, Harmer filed a federal civil-rights lawsuit against the TDOC in which he alleged that the agency violated his First and Eighth Amendment rights, among other transgressions.

“I recently notified the court I feared for my safety because MCCX staff relieving P.C.U. #1 outer front door unlocked and pointed to several examples,” Harmer wrote at the bottom of page 1. “In fact, on May 30, 2018 a population inmate was able to gain unauthorized access to P.C.U. #1 because Corporal Wagner and officer Dishman left the outer front door unlocked. I even pointed out Sgt. Martini, Sgt. Moore and Sgt. Cashmore was aware the front outer door was left unlocked.” [sic]

He concluded the letter with, “If I’m harmed it is due to my exposing MCCX prison officials and staff misconduct.” 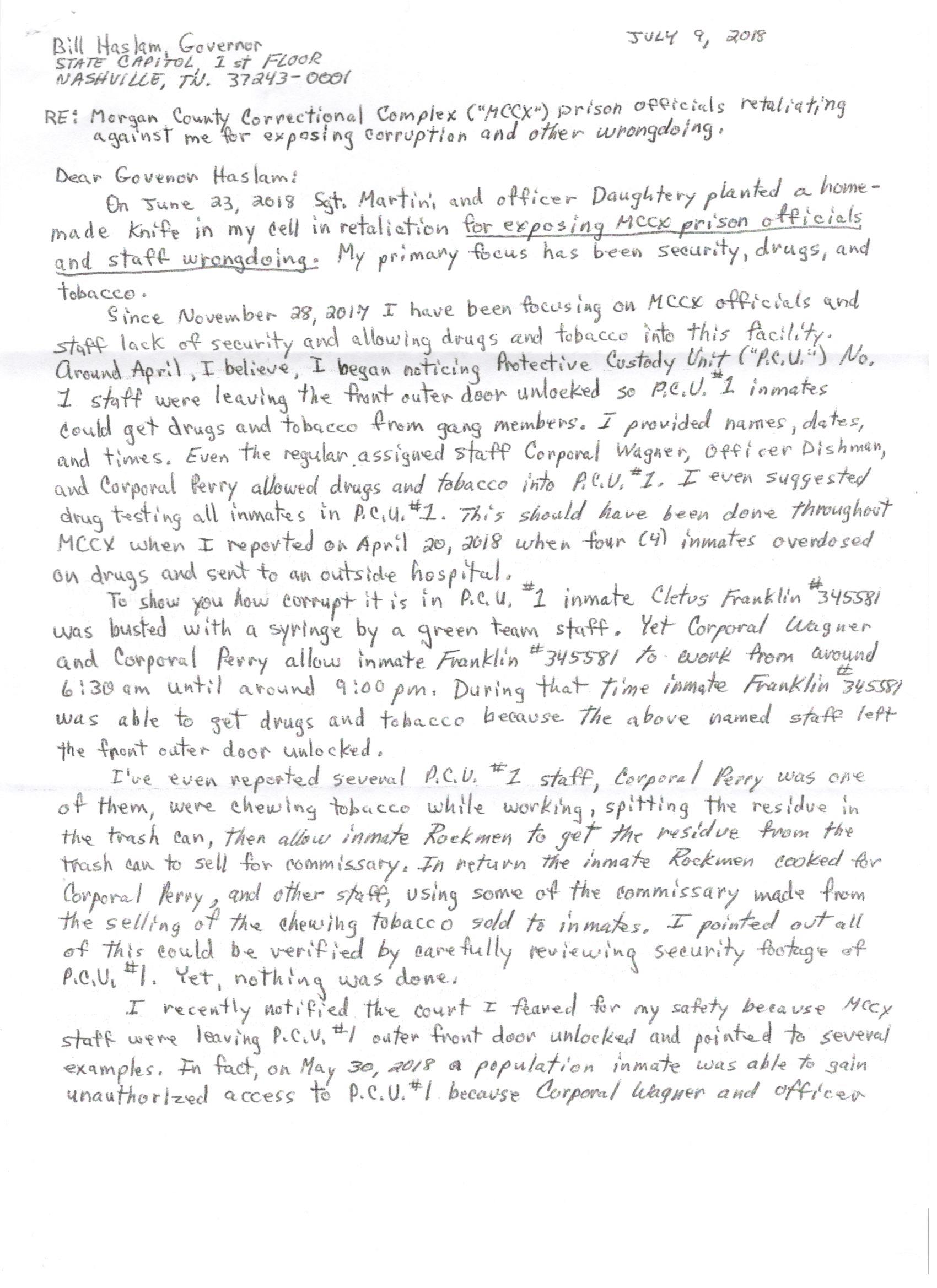 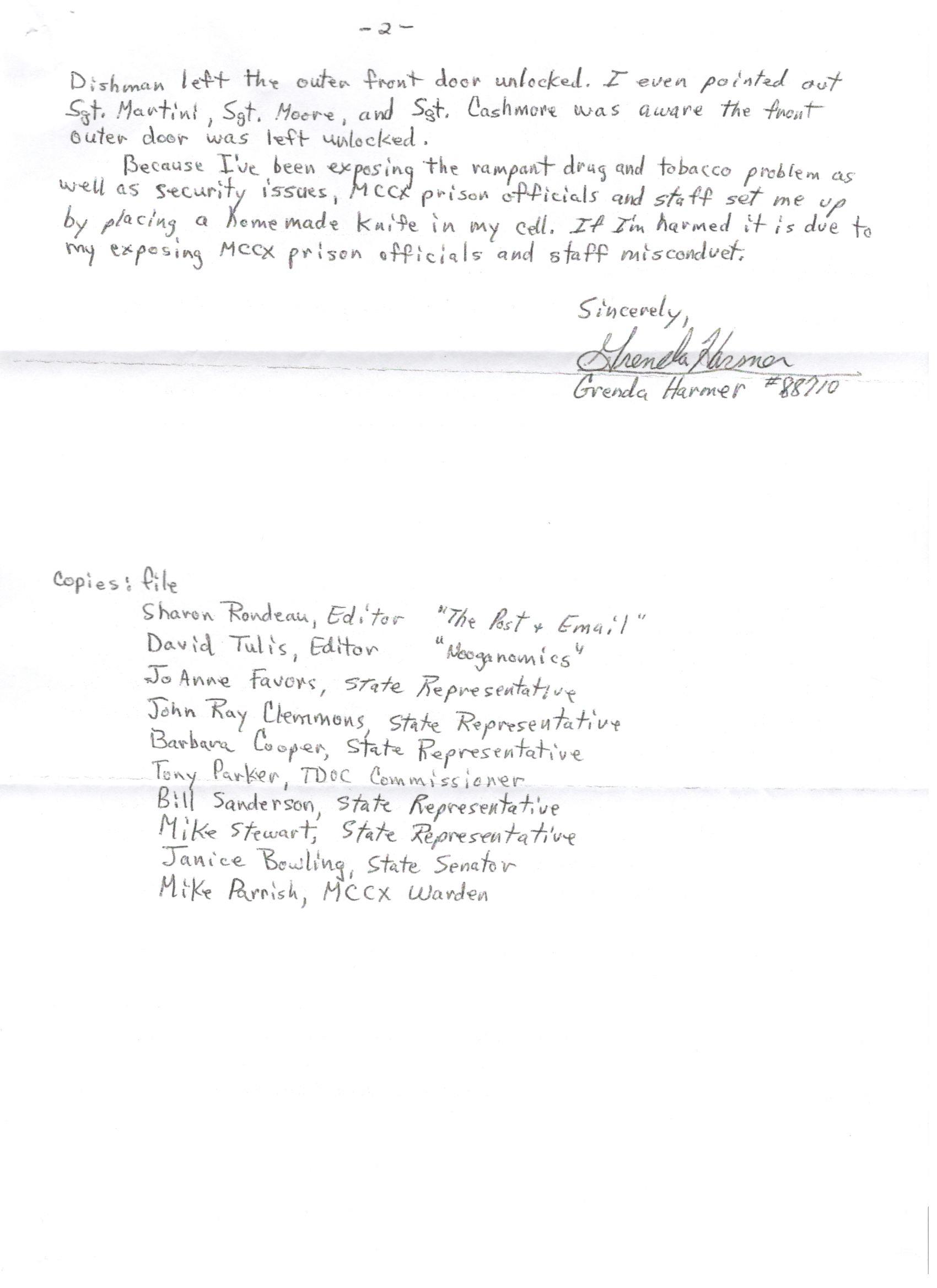