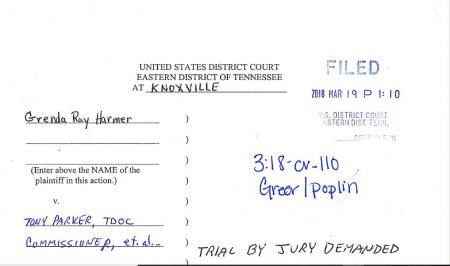 (Mar. 31, 2018) — In one of many memos received during the month of March, Tennessee Department of Correction (TDOC) inmate Grenda Ray Harmer, #88710, related that a federal lawsuit he has been working on over the latter part of the winter has been filed.

Also included in his two-page memo dated March 23, 2018 are updates on inmate Chris Boler, #515353, who is reportedly being forced to cell with an inmate who threatened him earlier this month.

As stated in TDOC Administrative Policies, Section 404.09, inmates found to be “incompatible” are to be so noted and separated indefinitely.

In a number of memos over the last two months, Harmer has reported that Styrofoam trays are being used to serve meals to the inmates housed in PC (protective custody), which reportedly violates state health codes. Last week, The Post & Email received a memo from Harmer in which he thanked Associate Warden of Treatment (AWT) Ken Hutchinson for a reversion back to the use of solid trays, a change which was apparently short-lived.

As referenced in the March 23 memo, Harmer recently submitted to prison management a list of six inmates currently housed in PC who wish to be relocated to other prisons within the general population. The request arises from their claim that in violation of the guidelines set forth in TDOC Administrative Policy 404.09, their relocation to PC has never been reviewed.

Inmates and their relatives have reported that placement in protective custody severely limits or eliminates altogether access to the prison law library, recreational activities on the weekends, and other opportunities available to those in the general population.

One of those wishing to be moved is Michael Haycraft, #277811, whose wife and power of attorney reports suffers from mental illness and was expelled from the Therapeutic Community (TCOM) course shortly before he was about to receive a certificate of completion.  Mrs. Haycraft and Harmer, who has studied the case, both claim that Haycraft’s expulsion from the class violated TDOC policies.

Haycraft is scheduled for a parole hearing on April 10.

Harmer himself has been in PC since August 1 following an altercation in which a gang member was reportedly allowed out of his cell unguarded and then entered Harmer’s cell, threatening him with a knife.

The complaint, consisting of 39 pages and completely handwritten, alleges a plethora of violations reported to this publication over the last 18 months to include the appearance of paid employment at the Trousdale Turner Correctional Center (TTCC), owned and operated by CoreCivic, when no work was actually performed or assigned.

Several other TTCC inmates have made the same allegation to this writer.

In addition to Parker, Harmer named an array of correction officers, two prison physicians, a nurse, and then-MCCX Warden Shawn Phillips as defendants.

The complaint details Harmer’s frequent relocations, which included from TCIX to TTCC in July 2016; from TTCC to SCCF in April 2017; and from SCCF to MCCX in early June of last year.  Harmer alleges that the relocations resulted from his exposure of “prison officials/staff wrongdoing.”

Replete with details of dates, times and alleged incidents already reported to this writer, Harmer recounted the alleged confiscation of his personal property upon his arrival at MCCX last June and an incident involving three “John Does” who allegedly raided his cell, found a draft of the lawsuit, and “tore up” the document (page 9). 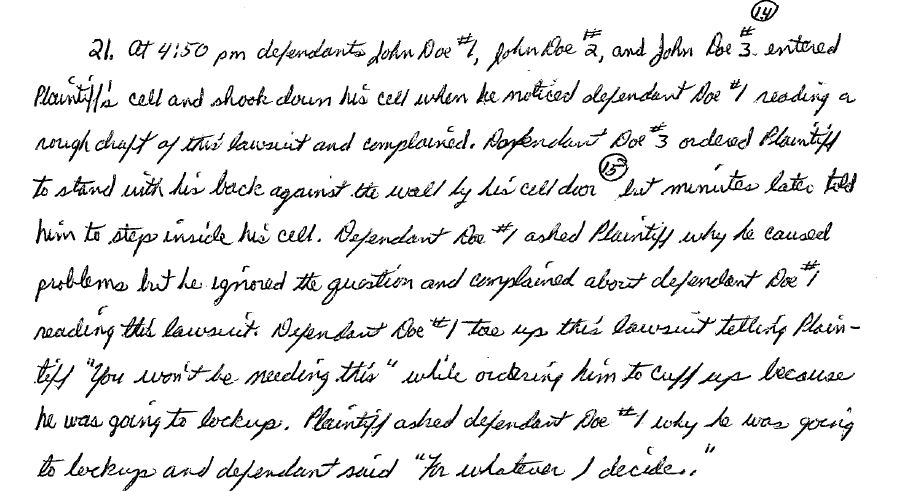 It is not the first lawsuit Harmer has filed against the Department of Correction during his lengthy incarceration.

Harmer also wrote that mail he was recently expecting did not arrive in addition to a Christmas package he never received.

Over the last three years, lost or non-delivered mail has been a common complaint among TDOC inmates in this writer’s experience. 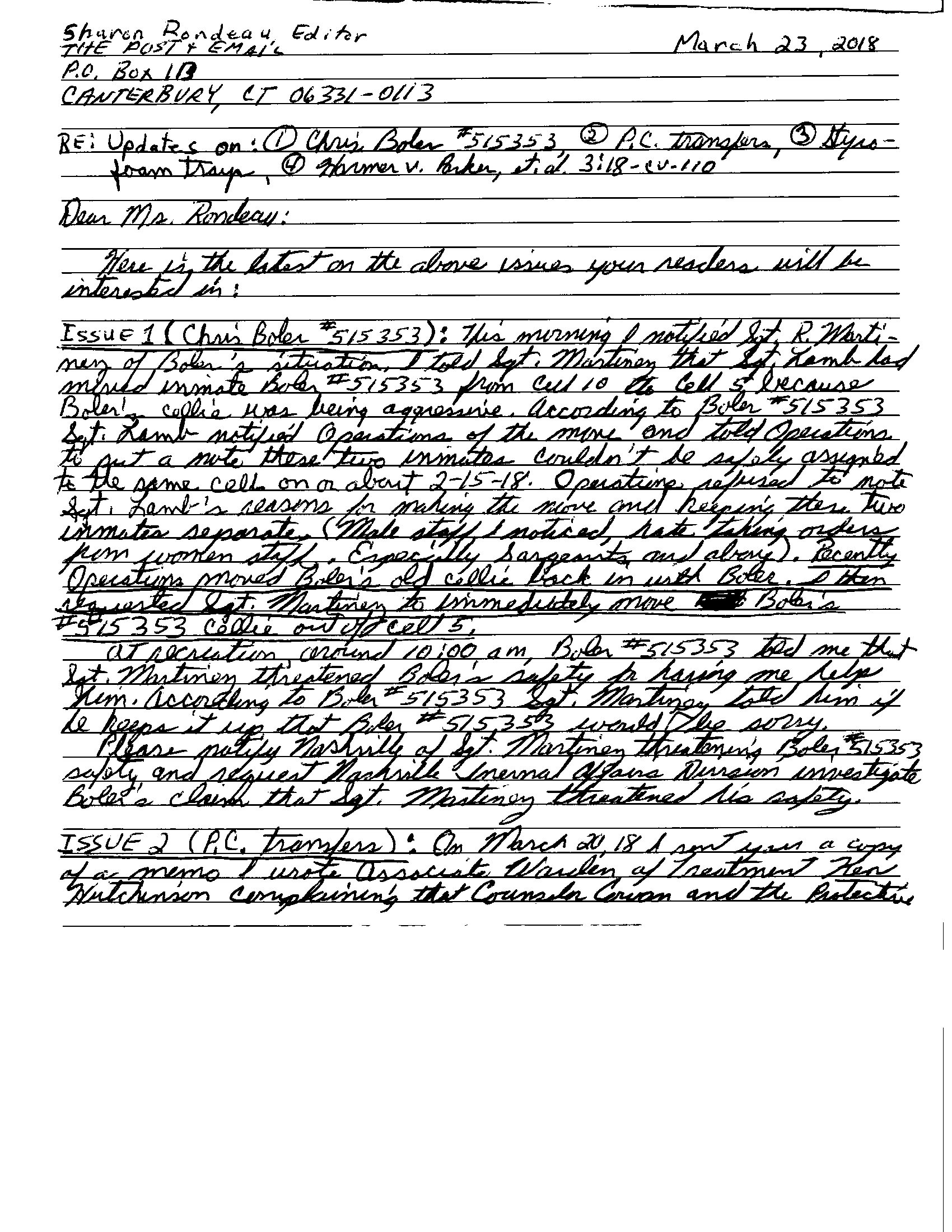 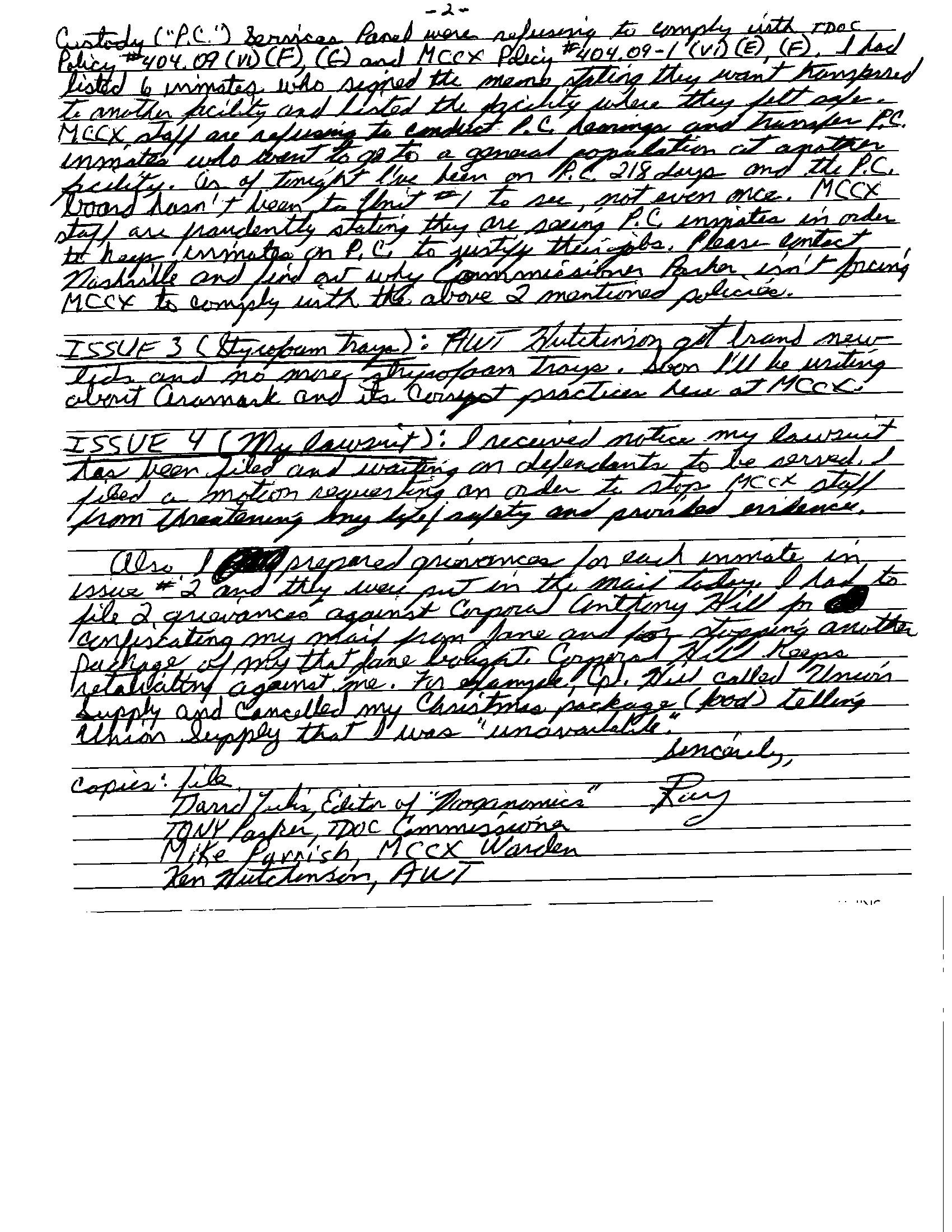