“THEY ALLOW GANG MEMBERS TO SELL DRUGS AND TOBACCO”

Harmer has been housed in PC since August 1, 2017, after he was threatened by a gang member in the general population. Inmates from the “population” are by policy not allowed to enter the PC unit.

A copious writer and documentarian, Harmer specified the deficiencies he said he has observed in PC of late and offered suggestions for improving security.

In late April, Harmer told us that four inmates were rushed to the hospital after overdosing on drugs, which the Tennessee Department of Correction (TDOC) considers “contraband” and therefore a banned substance.   A request for comment on Harmer’s report of TDOC spokeswoman Neysa Taylor received no response.

The incident was referenced again in Harmer’s most recent letter in which he wrote, “Its no wonder 4 inmates recently went out to the hospital for drug overdose… Staff encourage it and refuse to enforce security procedures.” [sic]

For the first time, Harmer reported that an inmate “who left the prison and returned with contraband was able to due to the lack of security.” His explanation was, “They leave the front outer door unlocked and allow P.C. inmates outside the Unit, which is extremely odd. Why would a P.C. inmate want to hang outside the unit? Even though there is one fence surrounding the P.C. Unit, inmates in general population could easily scale it.”

Harmer said that risks inherent in leaving the “front outer door to be unlocked” are overshadowed by correction staff’s alleged permissiveness in which “they allow gang members to sell drugs and tobacco on the P.C. Unit.”

Harmer then wrote that he has contacted Warden Mike Parris in the past about the problem but that “nothing has changed.” “They got dope and tobacco in on June 13, 2018,” Harmer asserted.

The Post & Email has received copies of Harmer’s numerous memos to Parris, TDOC Commissioner Tony Parker, and others within the state penal system detailing what he has reported as correction officers’ abrogation of TDOC administrative policies and procedures.

“I told Warden Parrish [sic] if he’d do the following it’d tighten security,” Harmer wrote, followed by a list of seven recommendations carrying over to the second page of his letter. 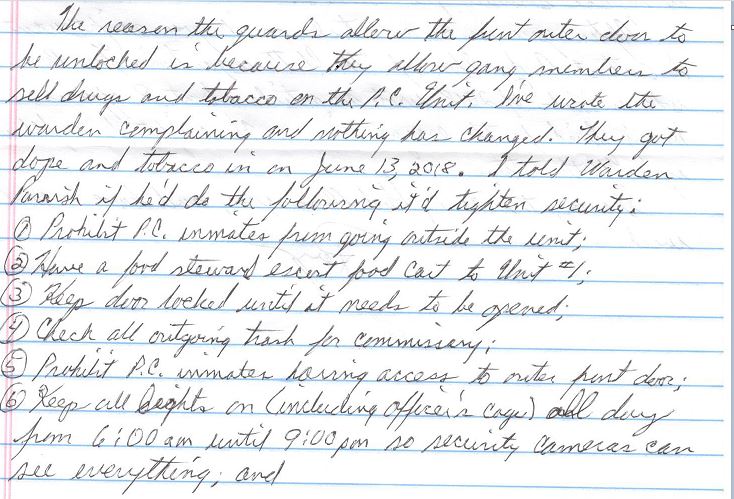