AS EVIDENCED BY AUTOMATED RESPONSE 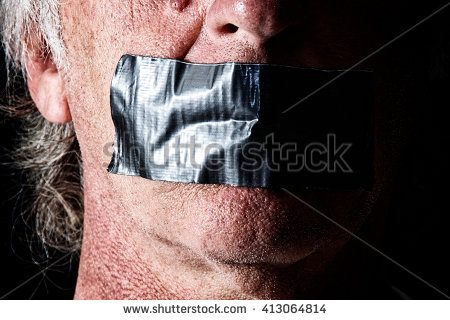 (Apr. 14, 2018) — In response to his fourth appeal to the suspension of his Twitter account which began on March 13, the founder of the organization Ordo Militaris Catholicus, Br. Alexis Bugnolo, received the following from Twitter’s “support” service on Friday:

Hello, We’re writing to let you know that your account features will remain locked or limited for the allotted time due to violations of the Twitter Rules, specifically our hateful conduct policy. We do not allow people to promote violence against or directly attack or threaten other people on the basis of race, ethnicity, national origin, sexual orientation, gender, gender identity, religious affiliation, age, disability, or disease. Please note that continued abusive behavior may lead to the suspension of your account. To avoid having your account suspended, please only post content that abides by the Twitter Rules: https://twitter.com/rules#hateful-conduct. You can learn more about our policy against hateful conduct here: https://help.twitter.com/rules-and-policies/hateful-conduct-policy. Thanks, Twitter

Br. Bugnolo has argued in his four appeals that the tweet allegedly responsible for the account’s suspension did not violate the company’s “hateful conduct” policy.  The tweet was critical of Prime Minister Teresa May’s approach to handling the problem of radical Islam in her country but did not suggest that anyone commit acts of violence against individuals or any group of people.  Bugnolo therefore refused to remove the tweet. 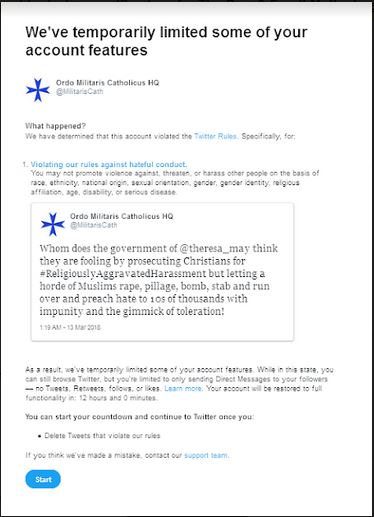 Bugnolo has called for support from the general public on the grounds that the suspension was an unjust restriction of the organization’s right to free speech and the free exercise of religion as protected by the First Amendment to the Bill of Rights.

After receiving Twitter’s latest response, Bugnolo wrote in an email:

It seems that Twitter does not even read appeals anymore. They send the same response, and do not care about observing their user policy on Privacy Rights.

Evidently Zuckerberg’s testimony has led them to buckle down on persecuting Christians and Conservatives, for they evidently believe and think that they can claim any tweet by anyone means what they say it means and shut down their account for violating a hatepolicy which says something entirely different.

Bugnolo’s reference to “Zuckerberg” is to Facebook founder and CEO Mark Zuckerberg, whose company has faced an emerging scandal involving its lack of protection of users’ personal information to which Zuckerberg and his COO, Sheryl Sandberg, have admitted.

Zuckerberg was on Capitol Hill for two days this past week testifying to members of Congress about his company’s practices, with some speculating that executives from other “Silicon Valley” tech companies could be next.

Facebook has also been accused of censoring “conservatives” and other groups expressing right-leaning political opinions after it instituted an algorithm change in January which purportedly placed more emphasis on communication between friends and family rather than business enterprises. However, many of those who identify as “conservative” said their traffic was significantly reduced and that emails sent to their followers en masse were discovered to have remained undelivered.

Twitter, Google, and a Google subsidiary, YouTube, have all been accused of censoring “conservative” speech and opinion. Since the February 14 school shooting in Parkland, FL, YouTube has been reported as having blocked the channels of anyone with firearms-related content such as how to properly load, clean, use and store firearms or the differences among the many firearms available.

On March 31, Bugnolo sent a complaint to Twitter’s Board of Directors but received no response.  Likewise, a media request sent by this writer to the Board on March 30 received no response, while a request for comment to Twitter’s press office on the account’s suspension elicited the reply of “We do not comment on individual accounts, for privacy and security reasons.”