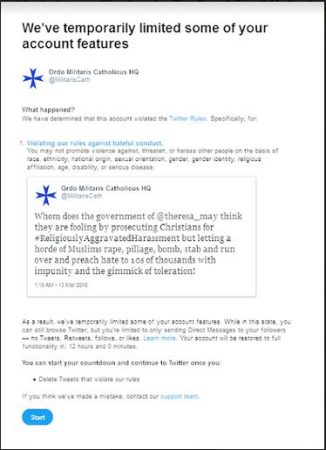 (Mar. 13, 2018) — Late Tuesday morning, founder of Ordo Militaris Catholicus Br. Alexis Bugnolo contacted this writer to say that the organization’s Twitter account had been suspended for 12 hours for allegedly “violating our rules against hateful conduct.”

The Catholic organization, founded in 2016, states that it “is a international defense and security initiative of Catholics for Catholics who are suffering persecution for their faith, where their defense and liberation requires military intervention or security actions, and this is allowed by local and/or international law.”

The group is incorporated in Montana and seeks to neutralize the threat of radical Islam to Christianity by training private citizens.

In an interview conducted later on Tuesday, Br. Bugnolo said that the suspension notice emanated from Twitter’s office in Ireland a few hours prior to President Trump’s announcement that Secretary of State Rex Tillerson will be departing and current CIA Director Mike Pompeo will be assuming the position.

Fox News reported on Tuesday that Pompeo will need to be confirmed by the Senate, as is customary for cabinet secretaries, despite his having served as a cabinet secretary since last year.

Br. Bugnolo emphasized that his organization’s Twitter account has been used “for the last 18 months” to conduct “investor relations” and make contacts with members and prospective members all over the world and that the suspension is therefore quite damaging in a number of ways.

When notified of the suspension, Fr. Bugnolo said he was sent a link via email to file a complaint, which he did, and that it was directed to Twitter’s San Francisco headquarters.  He described the process as “opaque and non-transparent” and said that once an account is suspended, “they go through all your tweets.”

Bugnolo added that although the suspension notice indicates that his account remains enabled to send direct messages (DMs), that ability, in actuality, has also disappeared.

“We try to observe the rules, and we block people who call for death of Muslims or any other group,” Bugnolo told us early in our interview. He described the suspension as “a total shock” and “inexplicable,” as his tweet was not “harassing” British Prime Minister Theresa May, who he had opined was prosecuting Christians for calling out radical Islam while allowing it to destroy her nation’s culture and society.

Bugnolo insisted, however, that his organization will not remove the tweet to which Twitter objected because it does not violate any of Twitter’s policies.  Moreover, he said the tweet referred an actual UK policy by which “People in the United Kingdom could face up to fifteen years in prison for repeatedly viewing ‘far-right propaganda’ or ‘terrorist material’ online.”

Although the suspension is said to be imposed for 12 hours, Bugnolo said that others of whom he is aware have received similar suspensions which have nevertheless continued for significantly longer and in some instances, become permanent.

“Guerilla journalist” James O’Keefe has posted video of undercover interviews his journalists have conducted with active and former Twitter employees demonstrating what O’Keefe described as “blatant censorship and systematic bias.”

Coincidentally, O’Keefe posted to his Twitter timeline on Tuesday a link to an article in The Epoch Times titled, “Project Veritas Raises Concerns That Social Networks May be Violating Free Speech Laws.”

In late October, commentator and author Dennis Prager, who runs the educational series “PragerU,” filed suit against Google for “restricting access” to its content on its subsidiary, YouTube.

On March 1, YouTube canceled the account of Infowars Washington, DC Bureau Chief Dr. Jerome Corsi, restoring it the next day.

Update, March 14, 2018, 9:36 a.m.:  Br. Bugnolo contacted The Post & Email to report that “The suspension continues, even though 23 hours have passed since it was imposed, and 11 after the deadline declared should have ended…”

Br. Bugnolo included a link to a statement issued by his organization’s corporate Twitter account, which reads: