WHILE CAUSE OF DEATH REMAINS UNCLEAR

(Apr. 14, 2018) — On March 27, The Post & Email related the most recent developments in the quagmire surrounding death benefits afforded to the widow of civilian contractor Thomas J. Boyle, Jr., who died in Kandahar Province, Afghanistan on June 19, 2012 under circumstances which remain contradictory.

As The Post & Email has reported over the last two years, Mr. Boyle’s death was said by the Army to have occurred as a result of an insurgent attack, but Mrs. Boyle later received accounts from individuals stating that he was shot accidentally first by a soldier stationed in Tower 5 and the roving guard who fired upon Mr. Boyle as he lay on the ground from the wounds sustained by the Tower 5 soldier.

Along with having received three different death certificates with as many causes of death, Mrs. Boyle believes that her husband’s body was moved after he was killed to make it look as if he were killed by the insurgents, all of whom were themselves killed after launching the surprise attack.

Because of the contradictory reports she received as to her husband’s cause of death, Mrs. Boyle took the extreme step of having his body exhumed to obtain a second autopsy, during which it was discovered that all of the bullet holes had been “sewn shut and there existed more entrance wounds than exit wounds.”  “Yet the medical examiner at Dover insists no ballistic fragments were recovered,” Mrs. Boyle told us.

The Army has never presented Mrs. Boyle with a full, unedited video from security cameras known to have been in operation that morning on-base. An appointment for Army representatives to do so last April was canceled when at the last minute, Army representatives attempted to change the location of the viewing from Mrs. Boyle’s home to a hotel conference room more than an hour from her home. Mrs. Boyle declined the altered agreement.

A multitude of FOIA requests, telephone calls, faxes and emails to representatives of all military branches over the last 5+ years has not yielded specifics as to how Mr. Boyle died. Mrs. Boyle has also requested a Congressional hearing, to which she has yet to receive a response.

Although her husband had purchased life insurance policies from seven different companies, Mrs. Boyle was denied accidental death benefits from all except Aetna.  AIG denied an accidental death payout based upon the war risk exclusion which Mrs. Boyle has contradicted by providing proof that the exclusion was not included in the policy and was found only on the L3 website.  “It simply was not attached to the policy and when I pointed this out to employees of AIG, I received no response,” she said.  “I even have emails wherein AIG representatives admit this error occurred and that it had been rectified after my husband’s death.  Messages between these employees also include the statement, ‘Let’s not mention fraud.'”

Both Aetna and MetLife indicated Mr. Boyle died from “accidental homicide” within their own internal notes. “But Metlife refuses to acknowledge the existence of their accidental death rider to this very day,” Mrs. Boyle said. 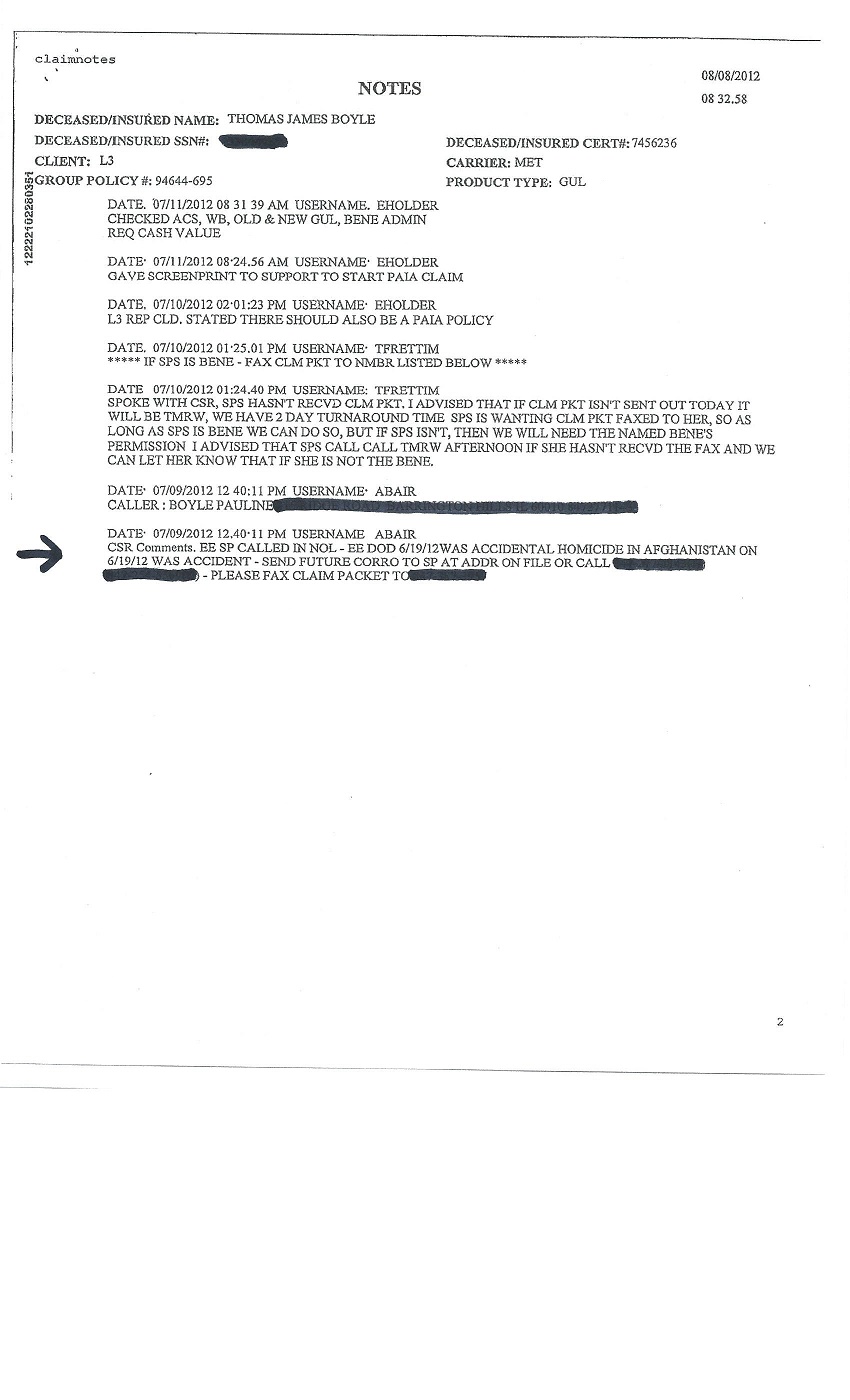 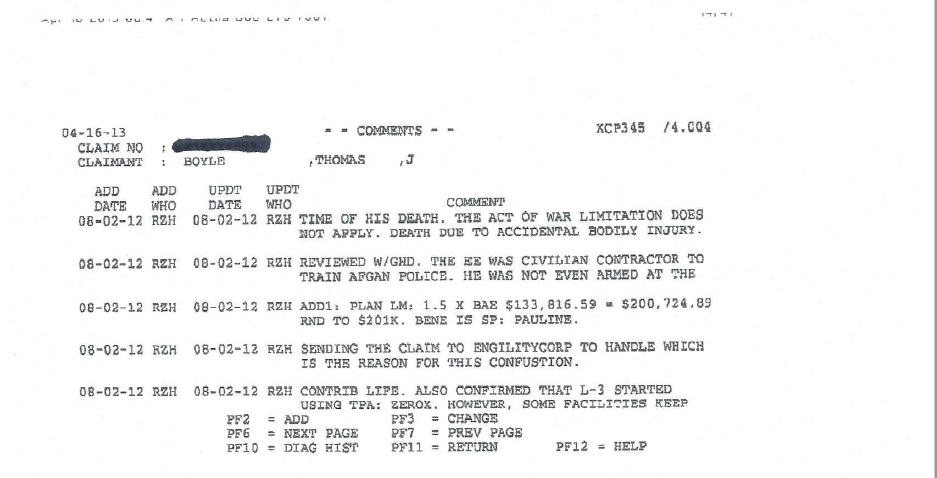 Mrs. Boyle believes that the Army instructed L-3 and the insurance companies not to divulge to her how her husband was actually killed so as to minimize the statistics of civilian contractor deaths and to protect them from liability, in addition to the negative media coverage the gross negligence would provide, as well as the financial windfall most would realize at the cost of Tom Boyle’s death.

The apparent obscuring of the facts of Mr. Boyle’s death now involves the U.S. Department of Labor, as the documentation submitted by the law firm of Flicker Garelick in their War Hazards application on behalf of Zurich Insurance states that the insurgent attack of June 19, 2012 on the base indicates that no Americans were killed or injured. 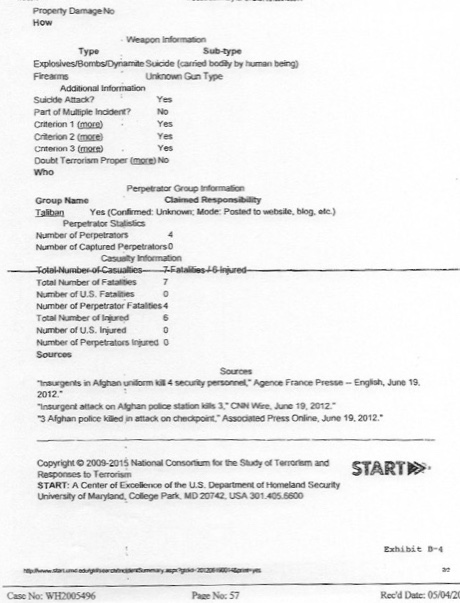 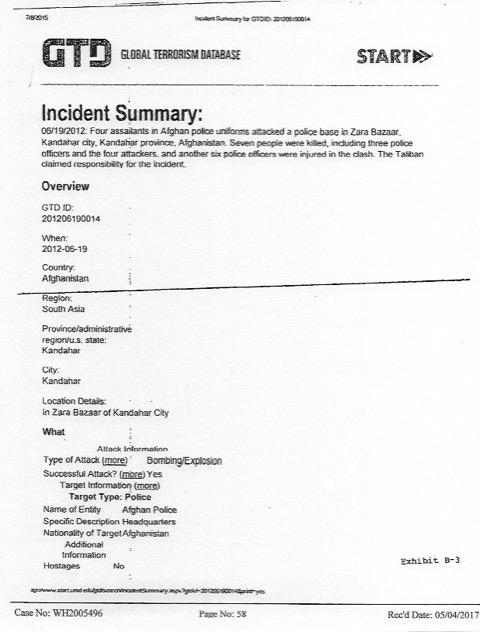 The law firm of Flicker Garelick is contracted by Zurich North American to process claims made by beneficiaries of the Longshoremen’s and Defense Base Acts.  Mrs. Boyle said she was asked to sign a “Stipulation of Facts” at Flicker’s request indicating that her husband’s death was a direct result of the insurgent attack.  Because it contained “the false narrative the military supplied,” Mrs. Boyle said, she “refused” to sign it.

She recently discovered that American taxpayers are reimbursing Zurich for the payments it has made to her per the War Hazards Act. 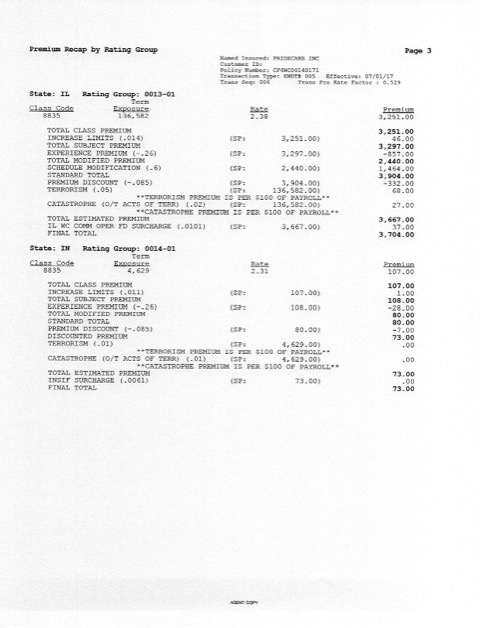 “Catastrophic and terrorism insurance was set up after 9/11 to protect the insurance companies from bankruptcy.  Would that not mean, because of the terrorism and catastrophic insurance guaranteed by the federal government, that indeed, Zurich and Flicker Garelick knew of this coverage yet proceeded to receive reimbursement?” Mrs. Boyle asked rhetorically.

Mrs. Boyle said she would like to know if the document by underwriter PrideCare indicates “premium loading,” the definition of which is “An amount an insurance company adds to the basic premium to cover the expense of securing and maintaining the business.”

“One requirement for reimbursement is that the carrier did not charge a premium to cover costs.  The Pridecare policy not only charges a premium for terrorism and catastrophic but also an amount to the ‘IL WC oper fd surcharge’ – does that confirm the existence of a Workman’s Compensation operating fund surcharge?” Mrs. Boyle asked.  “Is this called premium loading?”

“The bottom line is that eventually, Zurich American is being reimbursed for a policy which has actually no risk to them,” she said.

She believes that “collusion” has occurred among Zurich, Flicker Garelick, the DOL, L-3 and the life insurance carriers given that her husband’s medical records were sent to Zurich as indicated in a fax cover sheet.  “I never gave anyone medical records because I never was provided any. So who provided medical records to Zurich insurance?”

The true cause of death is so embarrassing to the Army, to the military, to the DOD…now add into the mix the collusion of the insurance companies and the fraud as well as the cost to taxpayers.  In my case alone I estimate this amount in excess of 1 million dollars and rest assured I am not the only one.

At an informal conference in February, Attorney Dan Louis of Flicker Garelick said, “I know you don’t think this way, but it doesn’t matter to the insurance company how he died; it’s just that he died.”

But clearly within the War Hazard decision document, Tom was not killed by any hostile force or person — he was killed by two U.S. soldiers, which disqualifies Zurich from receiving reimbursement.  The Department of Labor seems to have gone along with the false scenario, which prompted me to take this a step further and request a formal inquiry into this matter. 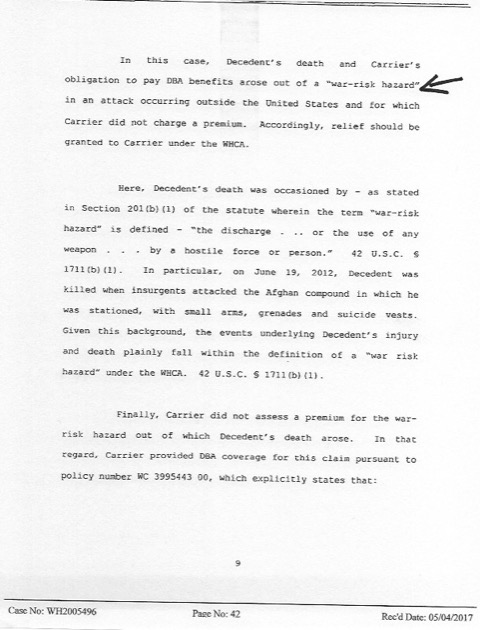 Additionally the statement by Flicker Garelick that my husband died within the scope of his employment is disproved in the Aetna notation of 8-02-12 wherein it is written that “he was not even armed at the time.”

The War Hazard decision document further states that “the claimant disputes the cause of death.”  This is important, because this confirms that I brought this issue to the attention of the DOL.

On the DOL’s website, there’s an area where it says that the agency “takes seriously any disputes” involved in the application process.  It struck me as strange that no one questioned the notes on the Aetna and MetLife claims statements referring to “accidental” death.   I recently took the initiative and spoke with a representative of the Department of Labor. Oddly, within my SeaPortal file the file notes of Aetna and Metlife were missing, although I submitted them on numerous occasions.  I resubmitted these documents again after our conference call.  One week later the representative of the DOL called me to state that she reviewed the file and has referred my case to her superiors.  I await their conclusion….