TAXPAYERS FOOT BILL TO INSURANCE COMPANY, EMPLOYER AMID CONTRADICTIONS IN CAUSE OF DEATH 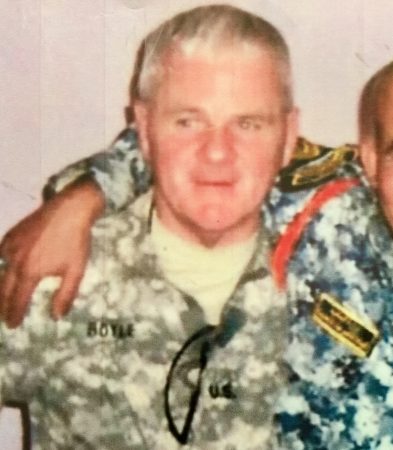 (Mar. 27, 2018) — The widow of a civilian contractor killed in Afghanistan in 2012 is now convinced that the U.S. Department of Labor (DOL) and its insurer, Zürich North American Insurance Company and the law firm of Flicker Garelick, which represents Zurich, are involved in the “cover-up” of the cause of her husband’s death.

Monthly benefit payments under the Longshoremen’s Act per the Defense Base Act are provided to the surviving spouse as a form of workman’s compensation required by the DOL for overseas workers.  At the time of his death, Thomas J. Boyle, Jr. was employed by L3 Communications as a civilian LEP (law enforcement professional) in support of the U.S. Army.

Mr. Boyle was killed June 19, 2012 on a small FOB (Forward Operating Base) outside Kandahar, Afghanistan.  Mrs. Boyle has received three death certificates with as many causes of death and never received a full briefing from the Army as to how her husband died.

According to the DOL:

4(a) makes the employer

Liable for the benefits

Obliged to secure the benefits

As The Post & Email has reported, the U.S. Army stated Tom Boyle had been killed as a result of an insurgent attack on the base where he was stationed with members of the 303rd Reservist Unit out of Jackson, MI.  However, eyewitnesses to the attack later told Mrs. Boyle in unofficial conversations and emails that her husband was a victim of “friendly fire,” which she terms “fratricide.”

Mrs. Boyle has compared the circumstances of her husband’s death to those of the late Army Ranger and Arizona Diamondbacks football player Pat Tillman, whose widow and surviving family members were first told that he was killed by enemy fire when in fact, “friendly fire” was later admitted to be the cause.

After Mr. Boyle’s death, the company-based insurance policies, underwritten by Aetna with the premiums paid by L3 Communications, were processed, and claims for accidental death policies acknowledged and disbursed not only to her, but also to L3 Communications.  “I obtained, within Aetna’s own notes, references to ‘accidental bodily injury’ as the cause of death,” Mrs. Boyle told The Post & Email.

The majority of the insurers have insisted that death benefits are not payable due to a “War Risk Exclusion,” although Mrs. Boyle does not believe her husband would have purchased the policies had he known about the disqualifying clause. In a previous article, additional emails among employees of AIG, Chartis, Metlife, Marsh, and Gallagher confirm, according to Mrs. Boyle, not only the collusion of the entities regarding policy coverage, but also the fact that Mr. Boyle “could NOT have ever seen the war risk exclusion since it was not posted with the policy and could only be found on the L3 website.”

“These underwriters even email one another about correcting this problem and further state, ‘Let’s not mention fraud,'” Mrs. Boyle said.

As indicated previously, the only company which issued a life insurance payout, Aetna, noted Mr. Boyle’s death as “accidental bodily injury.”  Similarly, Metlife classified his death as an “accidental homicide.” However, Mrs. Boyle said that “Metlife refuses to acknowledge the ‘accidental death’ portion of its policy, yet they have it noted that the cause of death is accidental.  Why would Metlife divulge such damaging information?  My conclusion points to an additional ‘janitor policy’ in addition to an Aetna janitor policy.  These are policies taken out by the employer without the knowledge of the employee.  I am stating that L3 has taken several of these janitor policies out on my husband and has benefited financially, yet his family is denied the very policy payouts he purchased.” 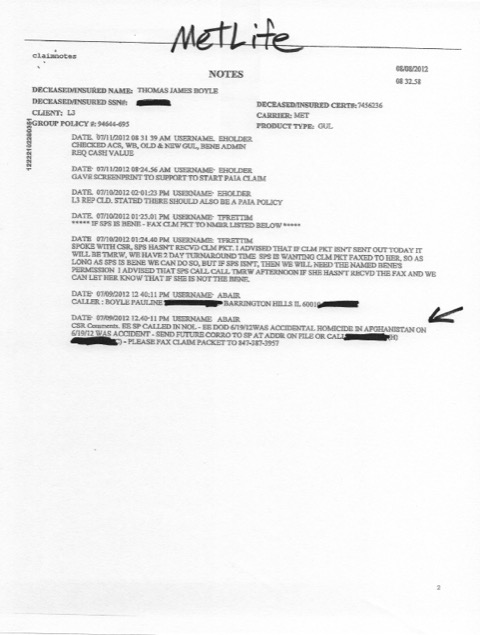 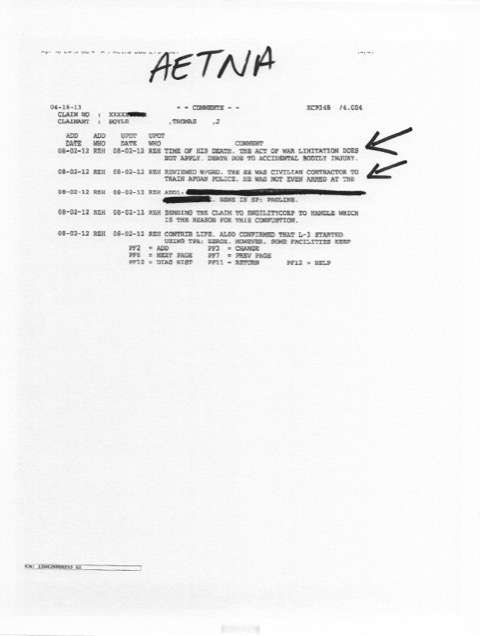 “To simplify the Department of Labor’s involvement, think of the Zurich policy as a workman’s compensation insurance policy required by law under the Longshoreman’s Act,” Mrs. Boyle explained.  “This requires Zurich to pay out benefits.  Now bring in the War Hazards Act, which allows full compensation to Zurich for all money paid out to the surviving spouse in this case at taxpayer expense.  Yes, every penny paid out is reimbursed to the insurance carrier along with attorney fees.  There exist caveats and requirements to the War Hazards Act and in this particular case, the requirements were not met and the application was submitted with fraudulent information by Keith Flicker of Flicker Garelick. Yet it was approved and Zurich obtained total reimbursement in November of 2017.”

“Tom was worth more money to others if he was killed by an insurgent, hence the cover-up,” Mrs. Boyle told us.  “Zurich is claiming Tom’s death met the definition of war risk hazard because it involved a ‘hostile force or person.’ I have maintained that it does not since I have documents that refer to Tom’s death as accidental homicide – in other words, ‘fratricide.'”

During a March 16 interview, Mrs. Boyle pointed out that the copy of the War Hazard application she eventually obtained held many inaccuracies.  “Zurich was required to provide a copy of the policy in which my husband was covered as part of their documentation confirming coverage.  The policy provided by Zurich expired six months before my husband was killed.”

Additionally, the third page appearing below indicates that the number of “U.S. fatalities” from the attack is “0” while also maintaining that no U.S. person was injured.

“How would anyone consider that document as pertinent?” Mrs. Boyle asked rhetorically.  “It clearly states no U.S. citizens were killed or injured, yet this document is used as evidence of my husband’s death.  And the most telling aspect is one of the requirements of entitlement being the injury or death must be the result of a war risk hazard further defined as the result of a ‘hostile force or person.’  The ‘accidental death’ of Tom Boyle would have precluded Zurich Insurance from receiving reimbursement on any level, hence the cover-up.  My husband was worth more to L3 and Zurich if he were killed by an insurgent rather than an accident.  And by refusing payouts to the widow, both entities and other underwriters saved even more money.”

Pages from the file held by Zurich and the DOL are as follows, with handwritten markings added by Mrs. Boyle indicating items she believes merit further investigation: 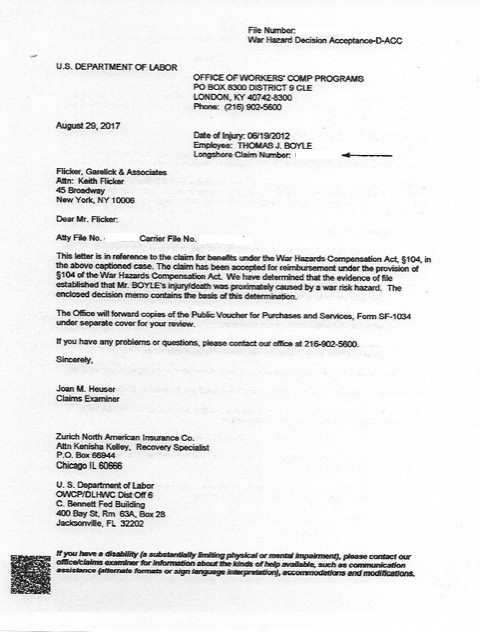 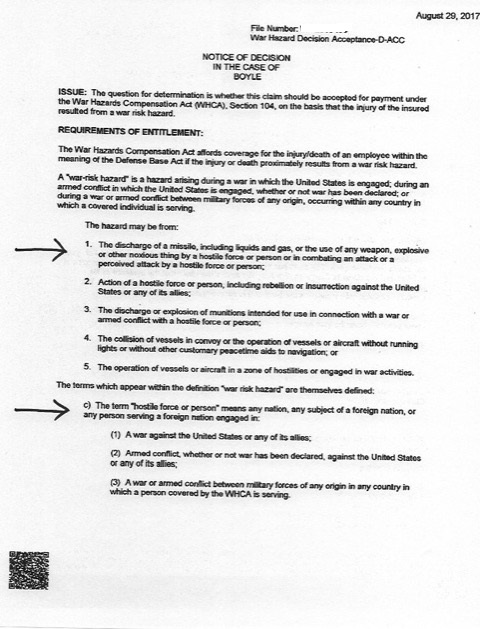 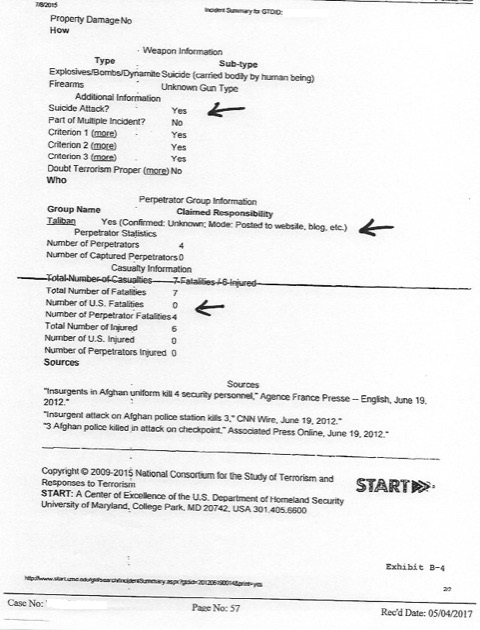 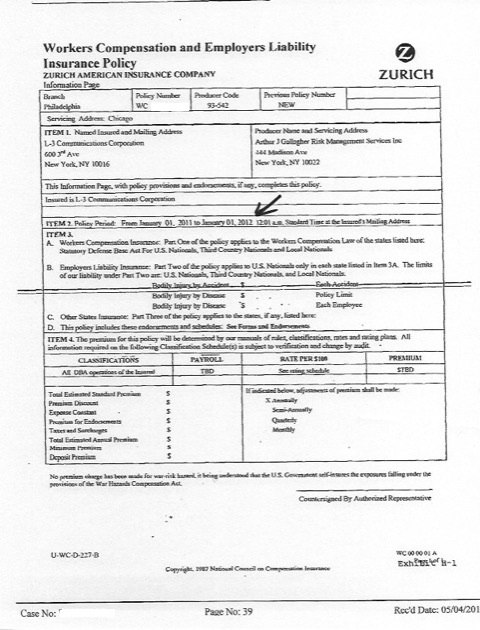 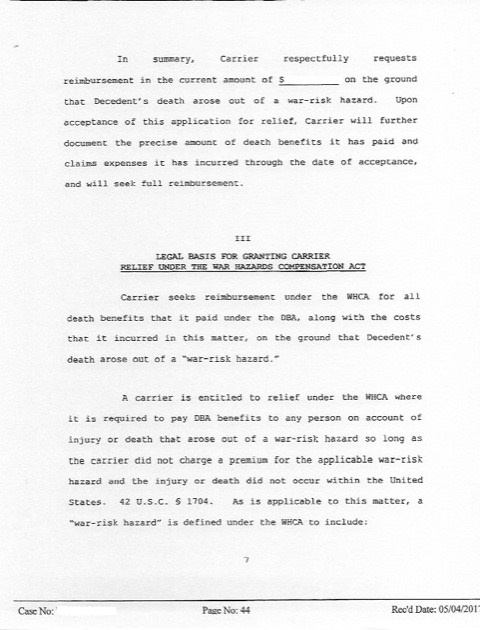 “The end result, in this case, is that Zurich was recompensed every penny they ever paid me at taxpayer expense under the War Hazards Act.  If it was accidental death, though, it would not have been covered by the Act,” Mrs. Boyle said.

“There is one more aspect that would prevent Zurich, Flicker Garelick and L3 from obtaining reimbursement from the Department of Labor.  This involves ‘premium loading,’” she added, an issue to be addressed in a subsequent article.

One Response to "Report: Obscuring of Civilian Contractor’s Death Expands to U.S. Department of Labor"