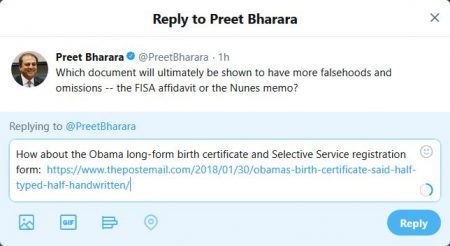 (Feb. 2, 2018) — On Friday afternoon, in response to the release of the Republican-authored “FISA memo” alleging that high-ranking FBI and DOJ officials applied for surveillance warrants for at least one Trump campaign staffer in 2016 under false pretenses, former U.S. Attorney for the Southern District of New York Preet Bharara tweeted that “falsehoods and omissions” might be found in the content of the memo or within an “affidavit” presumably presented to the FISA court as probable cause for a warrant.

Bharara was terminated from his post in March 2017 as one of the last remaining U.S. attorneys who had been appointed by Barack Hussein Obama, Donald Trump’s White House predecessor.

While serving, Bharara acquired a reputation for being tough on crime without regard to politics.  He successfully prosecuted members of the New York legislature as well as commentator, author and filmmaker Dinesh D’Souza, the latter of whom has claimed that his prosecution and that of former hedge-fund manager David Ganek were the result of an excess of Bharara’s prosecutorial powers.

How about the Obama long-form birth certificate and Selective Service registration form:  https://www.thepostemail.com/2018/01/30/obamas-birth-certificate-said-half-typed-half-handwritten/

A five-year criminal investigation conducted by a former detective working under the authority of the Maricopa County, AZ Sheriff’s Office (MCSO) found that the “long-form” birth certificate image posted at whitehouse.gov on April 27, 2011 is a “computer-generated forgery.”

The declaration was first made at a press conference on March 1, 2012, along with the finding that Obama’s purported Selective Service registration form is fraudulent.

At a second presser on July 17, 2012, then-Maricopa County Sheriff Joseph Arpaio termed the forgeries a matter of “national security.”  Despite those findings, neither the FBI nor the Justice Department investigated how a forgery had been uploaded to the White House website with the apparent purpose of deceiving the American public.

A third and final press conference on December 15, 2016 revealed that Zullo commissioned two highly-respected forensic analysts on different continents who concurred with Zullo’s conclusion that the long-form image is a forgery.

The media has consistently refused to report on the issue accurately by choosing to characterize the investigation as one which sought Obama’s birthplace or to disprove that he was born in Hawaii, as he has claimed.

Since early December, Zullo has provided a number of interviews to various outlets, including The Post & Email, and has connected the Obama document forgeries to the allegations of deception made by the memo released today by the House Permanent Subcommittee on Intelligence (HPSCI).

In an interview on “Freedom Friday” on January 19, 2018, Zullo said to host Carl Gallups:

Mark my words today: all roads lead back to Obama, and when it starts going that way, it’s just a matter of time before they get to this big question that’s been burning: “What about that birth certificate?”