“ALONG WITH A COMPLICIT MEDIA” 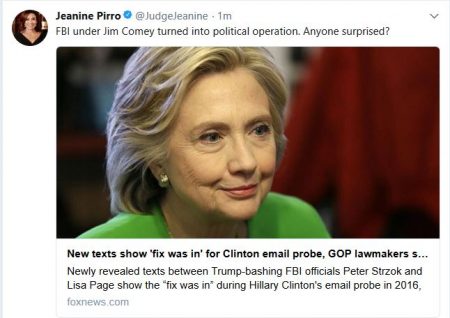 (Jan. 26, 2018) — On Friday afternoon, the Fox News Channel’s host of “Justice with Judge Jeanine” Jeanine Pirro wrote in a tweet that “FBI under Jim Comey turned into political operation.”  She then asked, “Anyone surprised?”

Pirro included a link to a Fox News article by Brooke Singman on the topic of the perceived politicization of the law-enforcement agency as evidenced by text messages exchanged between two high-level FBI employees recruited to serve on  Special Counsel Robert S. Mueller’s “Russia” investigation.

Special Agent for Counterintelligence Peter Strzok and FBI attorney Lisa Page were reportedly romantically involved and exchanged tens of thousands of text messages over at least 18 months, some of which appear to show a bias in favor of then-presidential candidate Hillary Clinton and dislike for Donald Trump.  At least one text message indicates that then-Attorney General Loretta Lynch had foreknowledge that Clinton would not be criminally charged for mishandling classified information on her private email server while Obama’s Secretary of State.

Strzok was one of the agents who interviewed Clinton just before then-FBI Director James Comey exonerated her in a press conference on July 5, 2016, to the surprise of many, including within the agency.

Recent reportage indicates that Page may have leaked internal FBI information to The Wall Street Journal just before the November 8, 2016 presidential election.

Obama claims that he was born in Honolulu, HI on August 4, 1961 at the Kapiolani Medical Center for Women & Children, but neither that hospital nor any other in the country or world has claimed to be his birthplace.  Throughout his adult life, various news sources have reported his birth as Kenya or Indonesia in addition to Hawaii, and both The Washington Post and the AP have related conflicting life narratives for the former White House occupant and U.S. Senator.

Given that the FBI undoubtedly knew about but refused to investigate the uploading in 2011 of a “computer-generated forgery” to the White House website said to represent Barack Hussein Obama’s “long-form” birth certificate, The Post & Email responded to Pirro’s tweet with: 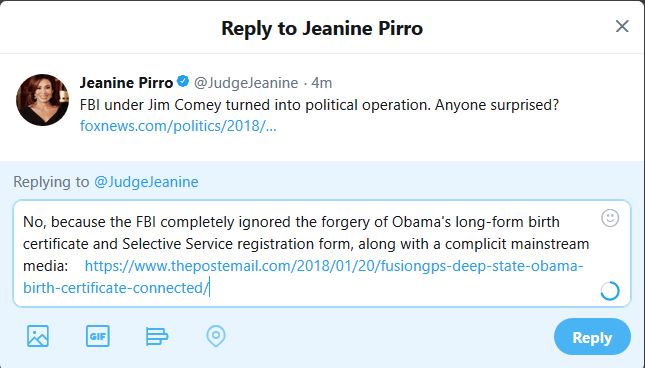 Ironically, on her January 6, 2018 show, Pirro had confronted Democratic strategist David Goodfriend with a disarming, “Have you ever seen a long-form?” after Goodfriend claimed that President Donald Trump is “bonkers” for claiming that Obama “was never a citizen,” meaning “a U.S. citizen.”

Trump had been the first high-profile person to openly question Obama’s constitutional eligibility early in 2011, which Trump believes was a catalyst in the release of the “long-form” image posted at whitehouse.gov on April 27 of that year.

Despite several industry experts having declared the image an abject forgery almost immediately, the mainstream media, including Fox News, refused to report or investigate the claims.

One week after surprising Goodfriend with her out-of-the-blue question, on January 13, Pirro hosted former Maricopa County Sheriff Joseph Arpaio, who commissioned the birth certificate investigation which determined, after an exhaustive five years and consultation with two well-known forensic experts, that the birth certificate image  is a forgery.

During the week preceding his appearance on “Justice,” Arpaio had declared himself a candidate for the U.S. Senate seat being vacated by Sen. Jeff Flake at the end of his term, which ends in early January 2019.

Pirro first asked the former lawman why he launched a Senate run at the age of 85, to which Arpaio responded that he intends to support Trump’s agenda and represent the people of Arizona if elected.  The interview turned to the subject of illegal aliens, on which Arpaio was perceived by many to have taken a stringent position during his 24 years as Maricopa County sheriff.

She then asked Arpaio for his “thoughts” on why or how a false missile-attack warning had been issued by someone within the State of Hawaii’s government that morning.  Arpaio responded by disparaging Hawaii government as it  government “during a certain investigation on a fake, fraudulent government document, they can’t even solve that case; they don’t even want to look at it…”

Pirro quickly denied Arpaio’s claim, falsely telling Arpaio and her audience that the birth certificate had been “filed” and “solved.”  She did not say where or with whom the image was allegedly “filed” or what had been “solved.”

When Arpaio continued to press the birth certificate issue with Hawaii as a bad actor, Pirro responded that she would continue to “push back on that,” then hastily redirected the interview back to the topic of illegal immigration.

While a local Fox affiliate reported one year ago that the Fox News Channel monitored the third and final press conference on the birth certificate investigation given by lead investigator Mike Zullo on December 15, 2016, FNC failed to report the results:  that two forensic analysts on two different continents using respectively different approaches arrived at the same conclusion as Zullo had nearly five years before:  that the long-form birth certificate image touted as a scan of a certified copy from the Hawaii Department of Health (HDOH) cannot possibly be genuine.

As it has for the last nearly-six years, the mainstream media continues to obscure the matter of the birth certificate forgery and marginalize anyone questioning Obama’s background or birthplace as a “birther.”

For the last two months, as the news of a politicized FBI, Justice Department and the surveillance of the Trump campaign under highly questionable circumstances has emerged, Zullo has been appearing regularly on radio shows to discuss how the “Deep State” may have been instrumental in creating and promoting the birth certificate as authentic “with the intent to deceive” an unsuspecting American electorate.

On January 18, Zullo predicted on the Bill Martinez Live! show that in regard to the truth about the birth certificate image, the “dam is going to break.”