TDOC DENIES MEDICAL NEED, BUT WHY?

(Jan. 4, 2018) — A Tennessee state inmate who was prescribed diabetic shoes more than two months ago still has not received them, according to a mailing received on Wednesday.

Robert Z. Whipple, III resides at the Bledsoe County Correctional Complex (BCCX) in Pikeville and has two pending lawsuits against the Tennessee Department of Correction (TDOC) regarding denial of access to the prison’s federal law library and denial of promised parole in 2014.

I am editor of an online newspaper covering government corruption. I have been informed, through copious documentation, that your company is denying diabetic shoes to an inmate at the Bledsoe County Correctional Complex (BCCX) in Pikeville, TN. He is in a lot of pain and prison officials will not advocate for this medical need. The following is an article I have published on the case: https://www.thepostemail.com/2017/12/03/report-tennessee-inmate-denied-prescribed-diabetic-shoes/

with another coming out shortly. 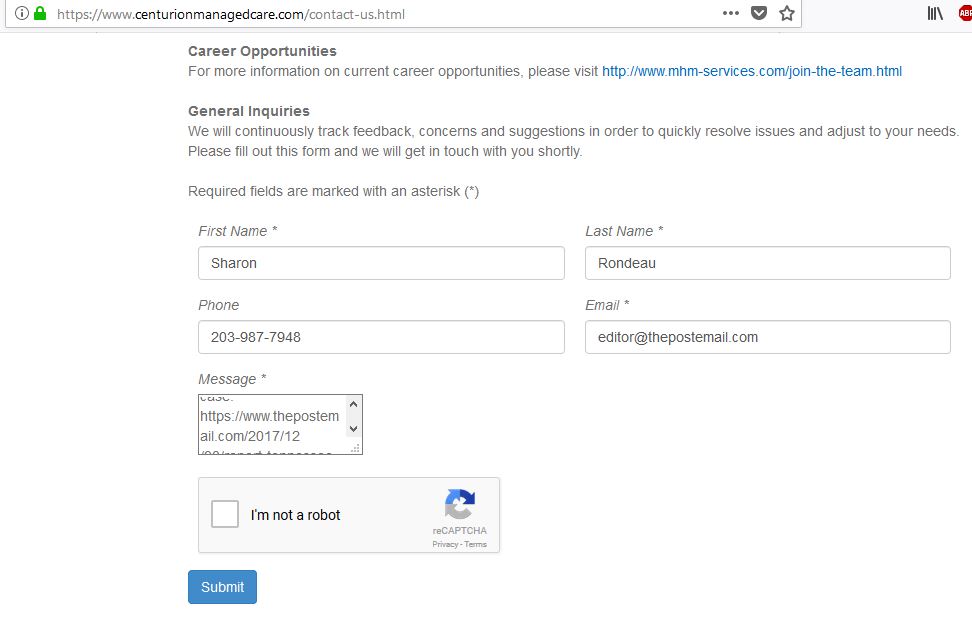 The letter to Parker, whose caption is “Opportunity to Avoid Costly Litigation,” reads: 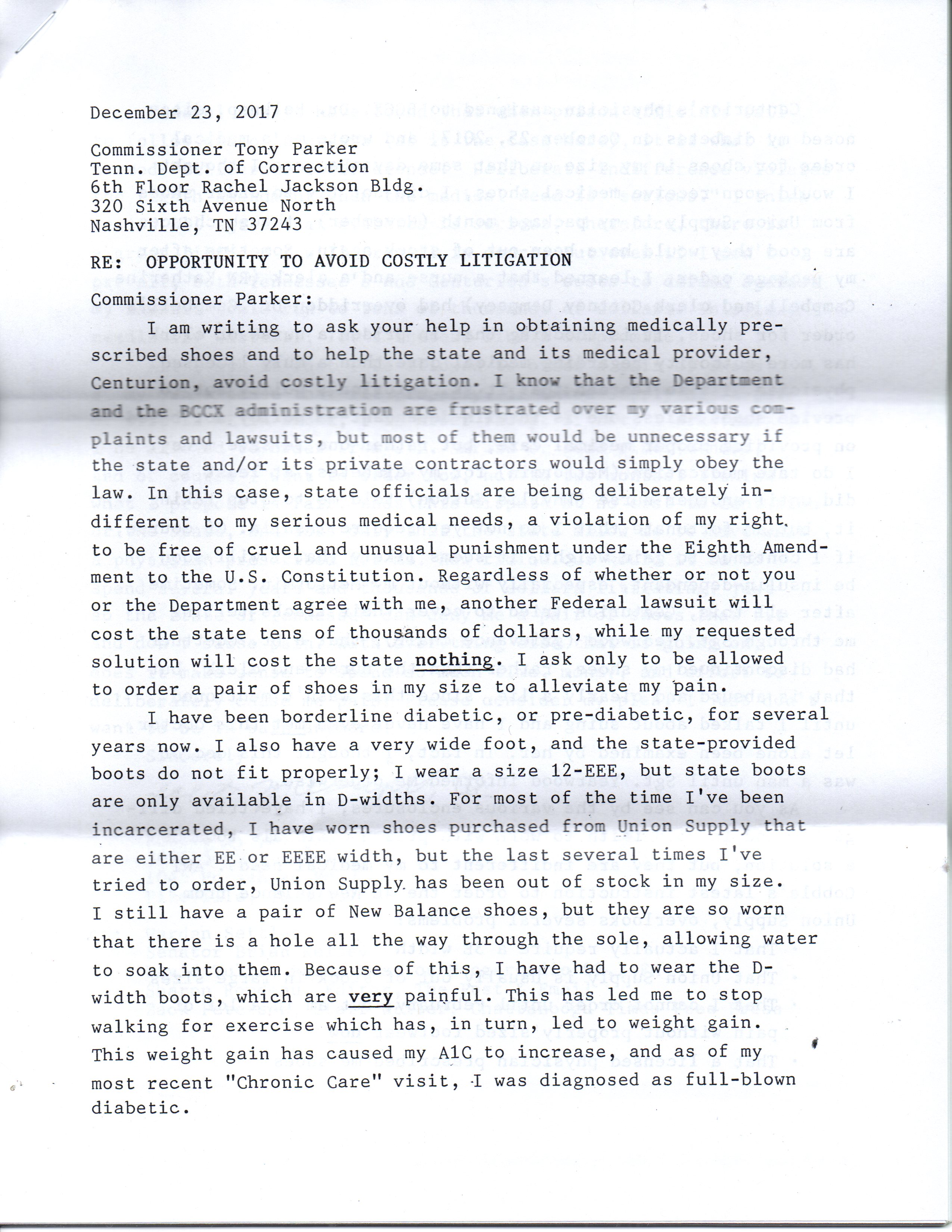 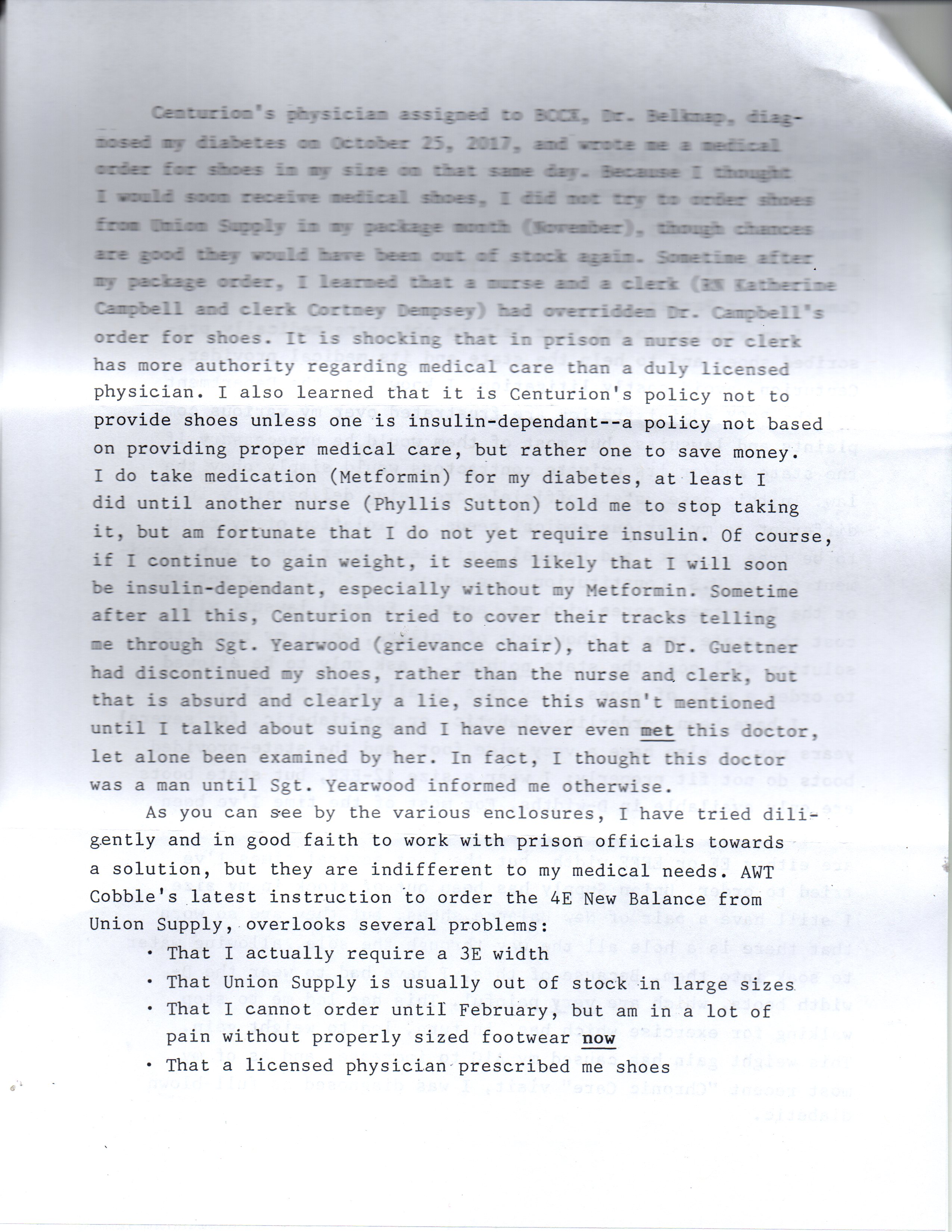 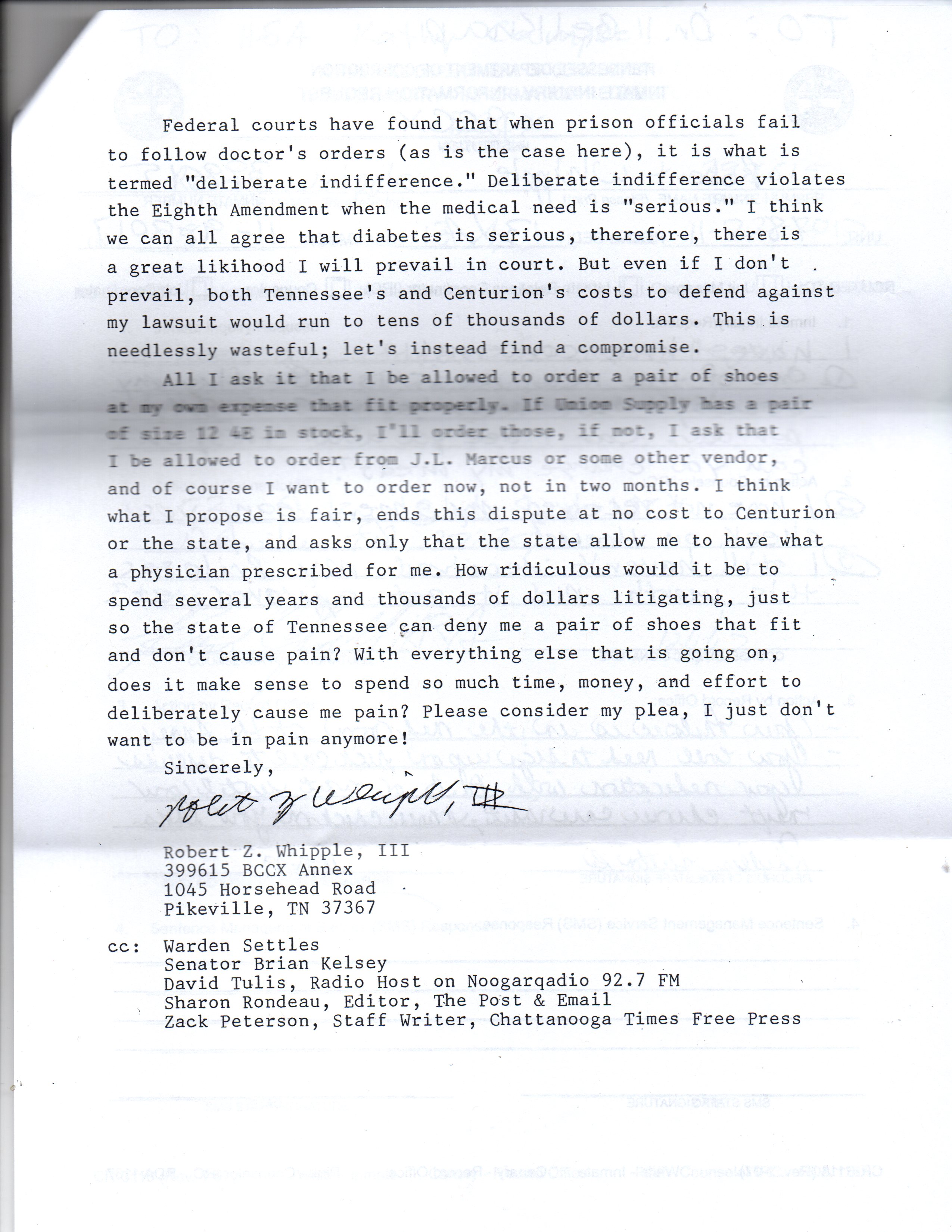 The entire packet contains 41 pages, many of which are grievances published in our previous articles on Whipple’s plight, which includes pain from diabetic neuropathy.  He has also reported having been denied Omeprazole for acid reflux disease and more recently, Metformin, a commonly-prescribed medication for Type II diabetics.

A December 4, 2017 Inmate Inquiry directed to BCCX Warden Darren Settles from Whipple states that Sgt. Jay Yearwood, mentioned in his letter to Parker, “will not process” his grievances on the matter.  “I need to exhaust so I can sue Centurion, but if Sgt. Yearwood won’t process my grievances I’ll end up suing him, which brings the state into it, which I don’t want to do since win or lose it will cost taxpayers a lot of money,” Whipple wrote, then offering to pay for the shoes himself. 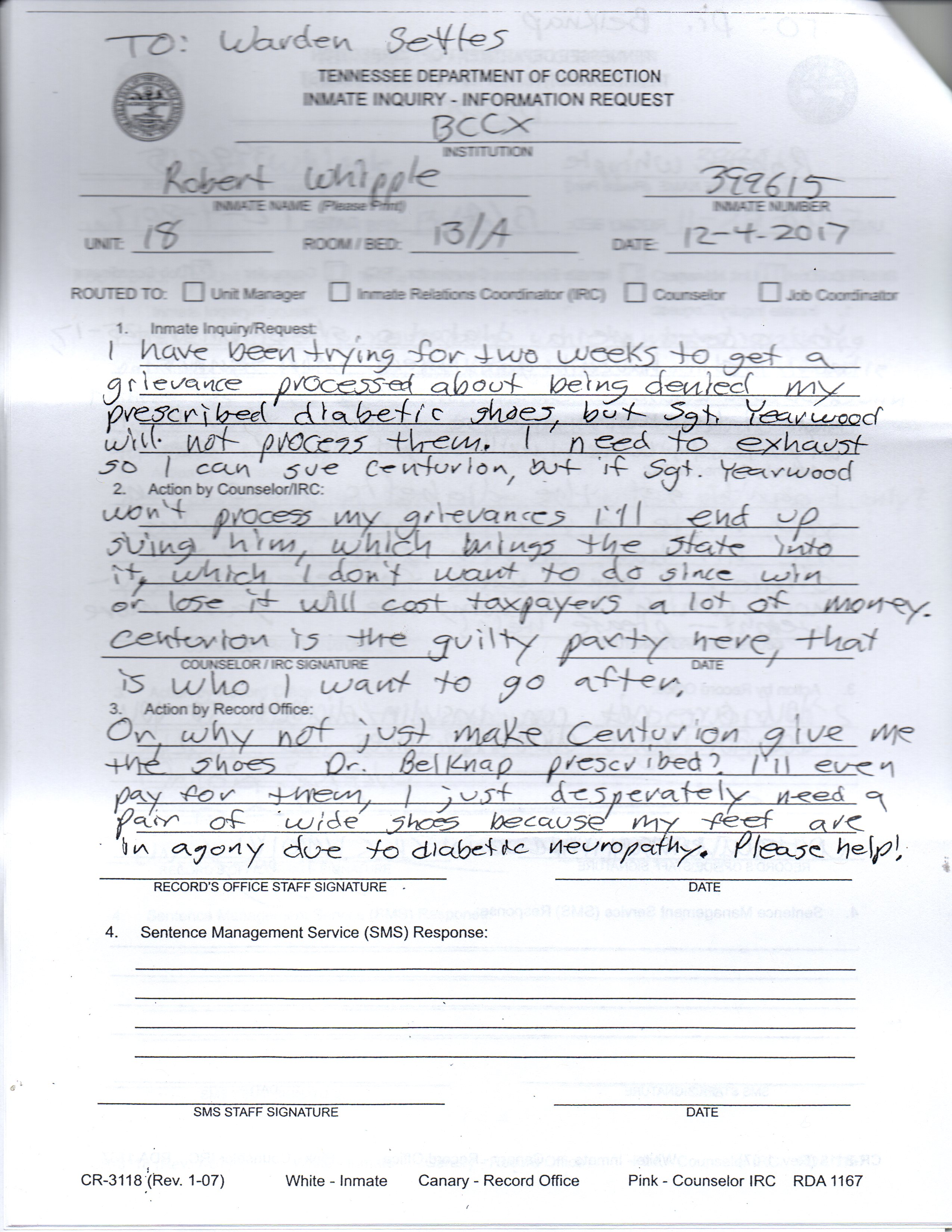 Despite Whipple’s considerable documentation of his condition and the doctor’s orders, his November 27, 2017 grievance addressed to Yearwood received the following response two days later from Health Services Administrator Katherine Campbell: 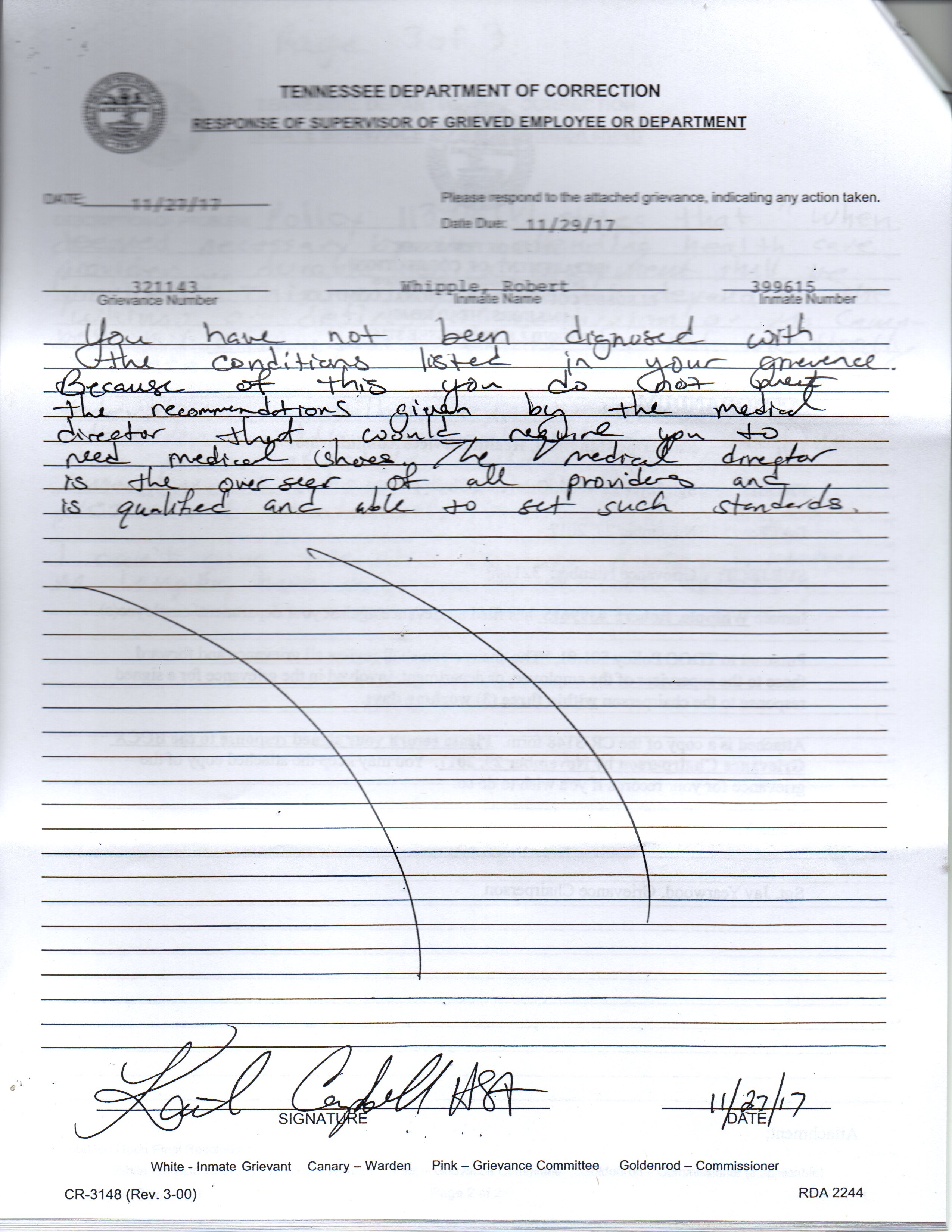 David Tulis of Nooganomics has also reported recently on this story.