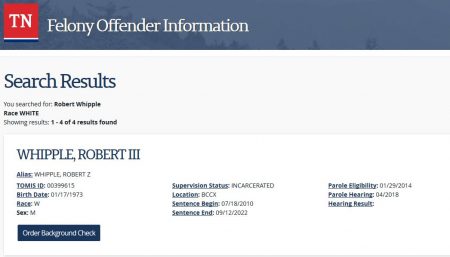 (Aug. 21, 2017) — Bledsoe County Correctional Complex (BCCX) inmate Robert Z. Whipple, III recently told The Post & Email in a letter that he has three pending federal lawsuits filed against the State of Tennessee as a result of his incarceration.

A fourth was dismissed “on summary judgment,” Whipple reported.

According to Whipple’s FOIL entry at the Tennessee Department of Correction (TDOC), he was eligible for parole on January 29, 2014.

On the first page of his July 24, 2017 letter, Whipple provided the cases and their numbers. 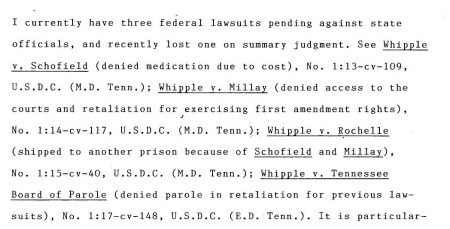 As to the case Whipple v. Tennessee Board of Parole, Whipple wrote in his typewritten letter:

It is particularly outrageous that my parole was denied as I am a non-violent offender, completed a 9-month intensive drug treatment program in prison, have a college degree, and haven’t had a disciplinary since 2014– even worse, I was promised parole by a hearing officer in 2014 if I completed TCOM (drug program) and no disciplinaries–apparently you can’t trust anyone who works for the State of Tennessee.

A “disciplinary” is a written infraction report against prison rules alleged by prison staff against an inmate.

Whipple is not the first Tennessee inmate to claim that he was kept in prison long beyond his parole date without a valid reason.  In two other cases, The Post & Email received documentation from inmates and forwarded it, at their request, to the Parole Board’s spokesman, Melissa McDonald.  We have not since heard from those inmates or McDonald.

On Monday, The Post & Email received an order in the Parole Board case which respectively granted and denied, each in part, Whipple’s motion “for his six-month printout of his trust fund statements and for sanctions and a hearing regarding alleged interference with Plaintiff’s legal mail.”

The order, signed by Judge Leon Jordan and filed on August 4, details that Whipple attempted to obtain and send a record of his inmate trust account in order to prove to the court that he should be granted in forma pauperis status.

In 1948, Congress passed a statute, 28 U.S.C. 1915, addressing the granting of access to the federal courts to prisoners without the ability to pay customary filing fees (in forma pauperis).  The law begins:

(a)(1) Subject to subsection (b), any court of the United States may authorize the commencement, prosecution or defense of any suit, action or proceeding, civil or criminal, or appeal therein, without prepayment of fees or security therefor, by a person who submits an affidavit that includes a statement of all assets such prisoner possesses that the person is unable to pay such fees or give security therefor. Such affidavit shall state the nature of the action, defense or appeal and affiant’s belief that the person is entitled to redress.

(2) A prisoner seeking to bring a civil action or appeal a judgment in a civil action or proceeding without prepayment of fees or security therefor, in addition to filing the affidavit filed under paragraph (1), shall submit a certified copy of the trust fund account statement (or institutional equivalent) for the prisoner for the 6-month period immediately preceding the filing of the complaint or notice of appeal, obtained from the appropriate official of each prison at which the prisoner is or was confined.

Jordan allowed 30 days for Whipple to comply by sending the required documentation.

As to Whipple’s contention that named defendant “Correctional Officer McBride” should be sanctioned for alleged interference with Whipple’s mail to the court and a hearing convened, Jordan cited Johnson v. Wilkinson…, which held “that one isolated incident of interference with mail did not violate constitutional rights.”

Over the last three months, The Post & Email has received an unofficial complaint against a mailroom employee at the Trousdale Turner Correctional Center (TTCC) who was arrested for alleged reckless endangerment on August 2 and reportedly is no longer employed at the prison.  In that case, The Post & Email contacted two court officials to whom the prisoner had addressed legal mail, who confirmed that they had received no documents from him.  We also spoke with a relative of the inmate who confirmed that trouble with the prison mail had necessitated his or her involvement from the outside.

A number of other Tennessee prisoners in various facilities have alleged that their outgoing mail has been tampered with or never sent to its destination.

The complete August 4 order is below. 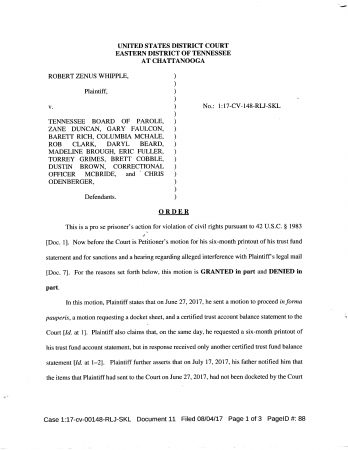 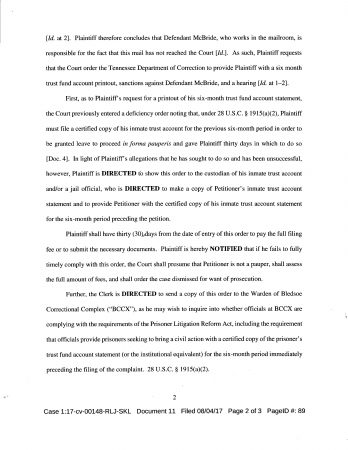 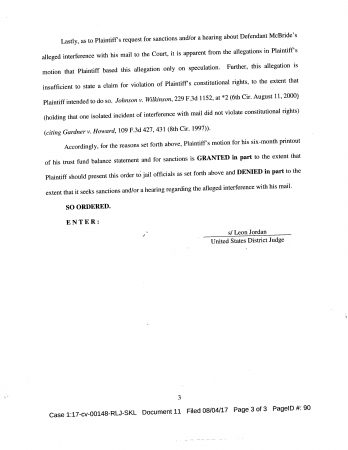 In another document received on Monday titled “Inmate Inquiry – Information Request,” Whipple alleged that he has been prevented from accessing BCCX’s “Site 2 law library,” which contains federal law cases.  “The U.S. Supreme Court has held that prison officials have an affirmative obligation to assist prisoners in accessing the courts–either by providing access to an adequate law library or by providing trained legal assistance.  See Bounds v. Smith, (I’d give you the citation, but I don’t have law library access!) 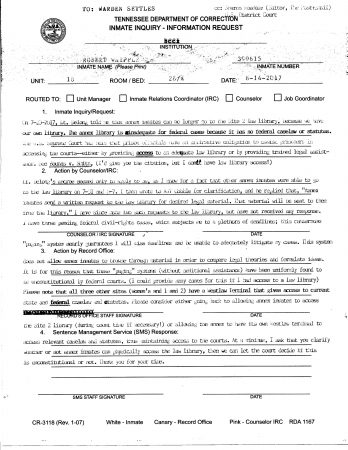 Months ago, inmates at TTCC related to this publication that they, too, had very little, if any, access to the law library, most frequently attributed to short-staffing and constant “lockdown” situations.