INMATE’S CASES TWICE DELAYED DUE TO LACK OF LEGAL RESOURCES 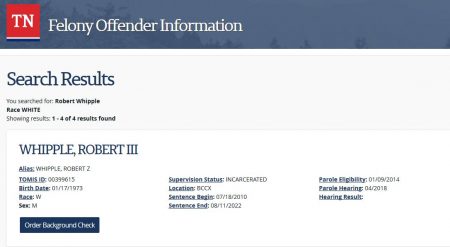 (Oct. 7, 2017) — Tennessee Department of Correction (TDOC) inmate Robert Z. Whipple, III, #399615, continues to report that staff at the Bledsoe County Correctional Complex (BCCX) in Pikeville, TN prevent him on an ongoing basis from accessing the courts via the prison’s federal law library.

In a letter directed to the American Correctional Association (ACA) regarding his complaint, Whipple stated that the organization, which sets “mandatory” and “non-mandatory” standards for prisons across the United States and internationally, is scheduled to perform an inspection of BCCX in the near future.

Just over a year ago, the ACA renewed the accreditation of two TDOC facilities.  “With the reaccreditation of TCIX and RMSI, TDOC continues to be one of only a handful of correctional systems in the nation to hold the ACA’s Golden Eagle Award for full accreditation,” the TDOC reported on August 8 of last year.

Whipple’s letter was copied to this publication, TDOC Commissioner Tony Parker, and the Sixth Circuit Court of Appeals in Cincinnati, which adjudicates cases arising in Tennessee.

Whipple has three active federal lawsuits filed against the TDOC, one of which centers on “denial of access to the courts and retaliation for exercising first amendment rights.” He believes that BCCX staff are purposely preventing him and others from accessing the “Site 2” law library.

Whipple resides in what is known as the “annex,” which is considered a more desirable section of the prison than others but reportedly has inadequate legal resources.  In past and current correspondence, he has described a “paging system” by which inmates lodge requests with prison staff for specific legal volumes in order to advance their legal work with the proper citations.

“This paging system is not the subject of any policy, although there is a policy regarding a paging system for segregated inmates,” Whipple wrote on page 1.  “The procedure in place for the annex…is actually WORSE than the access given to segregation inmates in that seg inmates can speak with a legal library aide that is actually searching for the cases he requests, annex inmates can only speak with Richard King.  Richard King has no legal knowledge…, no access to Westlaw or lawbooks, and flatly refuses to help most inmates that request legal help.”

“Westlaw” is an online legal service self-identified as premier.

In an “Inmate Inquiry – Information Request” to the associate warden included with his letter, Whipple wrote that prison “library aides do not know how to look up the cases that cite another case and can’t or won’t send me the books needed to do it myself.”

“I have had to ask for more time in a federal court TWICE because prison officials will not or cannot provide the information I need,” he told the ACA.

As he cited previously, the U.S. Supreme Court has ruled in the 1976 North Carolina case of Bounds v. Smith that prison inmates have a constitutional right to access the judicial system.  In its ruling, the high court wrote that state prison systems have a responsibility to design a “Constitutionally sound program” in which inmates are afforded access to the courts which is “adequate, effective, and meaningful.”

As in the case of other prisoners who have contacted The Post & Email, Whipple alleges that his outgoing mail has been tampered with and in some cases never reached its intended recipient.  Inmates from a number of Tennessee prisons have reported specifically that their legal documents addressed to the courts have been reported by court personnel to have never arrived.

Several weeks, ago, The Post & Email attempted to reach Cobble to inquire about Whipple’s claims but received no response despite an assurance from Karen in Administration that she would relay our message.

In scores of letters received by The Post & Email over more than two years, Tennessee inmates have alleged “harassment” and retaliation in the form of physical assault and brutality, threats from gang members, confiscation of personal property, administrative conundrums such as the disappearance of grievance forms, and a reduction in food portions on a regular basis.

In the past, TDOC spokeswoman Neysa Taylor has claimed that all complaints voiced against the department are “inaccurate,” but the facts, as reported by Nashville’s Channel 4, The Nashville Scene, and The Tennessean, say otherwise.

Whipple’s letter and Inmate Inquiry are presented below. 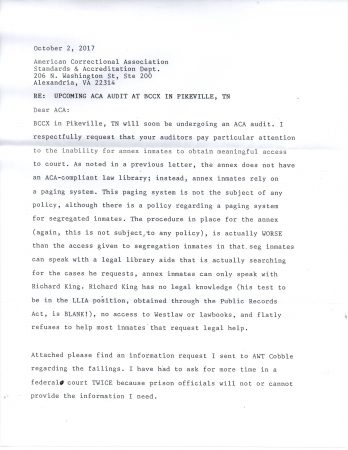 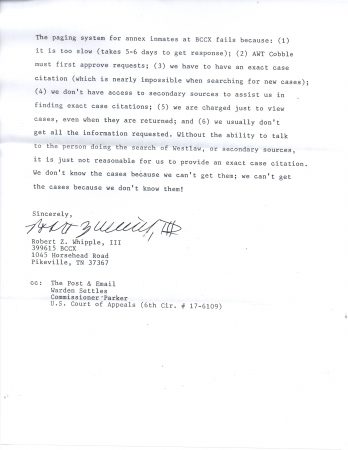 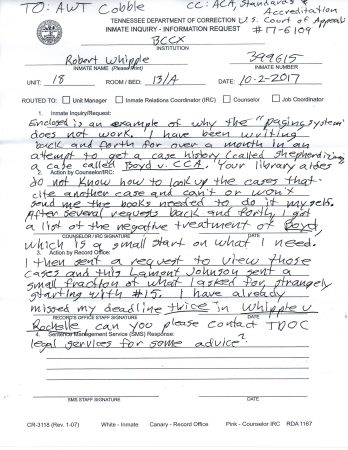 According to Whipple’s TDOC online registration form, he should have been granted parole in 2014.  His next scheduled parole hearing is in April.

One Response to "Report: Tennessee Prison Continues to Deny Access to Law Library"