(Dec. 7, 2017) — In an interview last Friday with “Freedom Friday” host Carl Gallups, Obama birth-certificate lead investigator Mike Zullo revealed for the first time that the “Deep State” prevented a federal investigation of his findings, compiled over a 5+-year period, that the “long-form” birth certificate image posted by the Obama White House in 2011 is a “computer-generated forgery.”

Virtually unknown in the United States prior to the election of Donald J. Trump last year, the term “Deep State” has now been invoked by some newscasters, journalists and commentators as well as by Trump himself through his Twitter account.  Left-leaning news outlets reluctantly discussed it beginning in early March, after Trump claimed on Twitter that he and his campaign aides had been “wiretapped” during the final months of the presidential campaign. 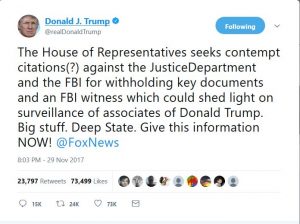 The article begins, featuring a photo of Bannon:

Here’s a handy rule for assessing the credibility of what you’re reading about national security in the Trump era: If somebody uses the term “Deep State,” you can be pretty sure they have no idea what they’re talking about.

The phrase’s appeal is undeniable. The notion of a shadowy network pulling the strings in Washington is an attractive one to an embattled White House and its political opponents, shorthand-employing commentators and conspiracy theorists alike. But uncritical use of this canard is lazy at best and counterproductive at worst. The term, which political scientists invented to refer to the networks of generals and spymasters that rule many authoritarian states around the world, has migrated from leftist critics of U.S. foreign policy to the alt-right advisers running the White House. As a card-carrying former member of America’s vast national security bureaucracy, I find it offensive. But I also find it offensive as an analyst, because it’s a deeply misleading way to understand how the U.S. government really works.

The term has additionally earned its own Wikipedia entry.

On March 20, The New Yorker wrote that “There Is No Deep State.  The problem in Washington is not a conspiracy against the President; it’s the President himself.”

In September, Politico writer Michael Crowley appeared to give credence to the existence of a “deep state” consisting of a “unaccountable string-pulling bureaucracy.”  “Beneath the politics of convenience is the reality that a large segment of the U.S. government really does operate without much transparency or public scrutiny, and has abused its awesome powers in myriad ways,” Crowley wrote, using U.S. military commanders and “national security insiders” as examples of “deep state” influence on sitting presidents.

On Wednesday, political commentator and strategist Dick Morris and his wife, Eileen McGann, published an article titled, “Now the Deep State Has a Name–the Federal Bureau of Investigation.”

The “Deep State” is now suspected by many, including some in Congress without using the term, of having participated in political activity while employed by the federal government to bring about the election of Hillary Rodham Clinton as the 45th president of the United States rather than Trump.

During the presidential transition period and beyond, a plethora of intelligence leaks to The Washington Post and The New York Times signaled what appeared to many Americans to be a concerted effort to undermine the former real estate mogul’s presidency, including the identification of Lt. Gen. Michael T. Flynn (Ret), Trump’s first national security advisor, a “U.S. person” involved in a call with then-Russian ambassador to the U.S. Sergei Kislyak.

Last Friday, just hours before Zullo’s interview with Gallups, Flynn accepted a plea deal in federal court with the admission that he lied to FBI agents during questioning about his communications with Kislyak.

On Wednesday, John Solomon of The Hill reported that “DeSantis said the person he spoke with said a senior FBI executive made an inappropriate comment suggesting the bureau had a personal motive in investigating Flynn and ruining his career. DeSantis wants the FBI to tell him if the videotape was saved.”

Over the last week, it has come to light that an FBI agent who participated in questioning Flynn was removed in August from Special Counsel Robert S. Mueller’s two-pronged investigation into alleged Russian interference in last year’s election and any “collusion” Trump or his campaign aides may have employed to secure his election.

The agent, Peter Strzok, was relocated to the Human Resources division of the FBI after Mueller discovered approximately 10,000 text messages exchanged between Strzok and his mistress, an FBI attorney, disparaging Trump and supportive of Clinton.

During Wray’s Thursday testimony, at least two Republican members of the House Judiciary Committee suggested that Mueller possessed a much more compelling reason to remove Strzok from his role in the investigation based on Wray’s contention that FBI agents may discuss their political views with others in the agency as long as they do not interfere with their work.

Strzok supervised the investigation into Clinton’s use of a private, unsecured email server while she was Obama’s secretary of state and reportedly changed wording in then-FBI Director James Comey’s report to describe Clinton’s actions as “extremely careless” rather than “grossly negligent,” the latter of which appears in the statute governing handling of classified information and could carry criminal charges.

In a virtual soliloquy during his time to pose questions, Rep. Jim Jordan (R-OH) connected hypothetical dots in which Strzok actively solicited the compilation of the Trump dossier and used it as justification to ask the FISA court to grant a warrant to capture the electronic communications of certain members of the Trump campaign last year.

Earlier on Thursday, Jordan had told Fox News that “an additional special counsel needs to be appointed to look into how a FISA warrant was obtained to look at members of President Trump’s campaign team.”

“There’s gotta be something more,” Jordan said to Wray of Strzok’s removal from the Mueller probe.  He then said, “Let’s remember a couple things about the dossier.  The Democrat National Committee and the Clinton campaign, which we now know were one and the same, paid the law firm (Perkins Coie), who paid Fusion GPS, who paid Christopher Steele, who then paid Russians to put together a report that we call a ‘dossier’ full of all kinds of fake news, National Enquirer garbage, and it’s been reported that this dossier was all dressed up by the FBI, taken to the FISA court and presented as a legitimate intelligence document that it became the basis for granting a warrant to spy on Americans.”

When Jordan asked to see the FISA application and “who took it there,” Wray responded that “our staffs have been having extensive interaction with both Intelligence Committees on our interaction with the FISA court, and I think that’s the appropriate stetting for those questions.”

As Trump’s new FBI Director, Christopher Wray, was testifying to the House Judiciary Committee on Thursday, Fox News reported that a “top DOJ official” was removed from one of his areas of responsibility as he undergoes investigation on the allegation that he communicated with Fusion GPS, a firm dedicated to conducting political research and definitively connected to the now-infamous “Trump dossier,” the Democratic National Committee (DNC), and the mega-law firm Perkins Coie.

The Post & Email produced a three-part report on Zullo’s interview, while a fourth and final segment during the last seven minutes dealt with the involvement of Perkins Coie in the release of the long-form birth certificate image on April 27, 2011.

When Bauer returned to Perkins Coie approximately six weeks after the image was released, Attorney Judith Corley became Obama’s personal attorney.  Bauer is now a partner at the law firm, and Corley is retired.

It was Corley who reportedly traveled to Hawaii in late April 2011 to retrieve two certified copies of Obama’s original birth certificate from then-Hawaii Department of Health (HDOH) Director Loretta Fuddy.  On the morning of April 27, 2011, prior to the release of the long-form image at whitehouse.gov, Bauer told members of the press in a private meeting that Obama had to obtain a “waiver” of the HDOH policy which releases only the “short-form” birth certificate to requesters.  “The short from is a computerized abstract, and that’s the legal birth certificate we requested in 2008 and that Hawaiians are entitled to.  Since the mid-1980s, the State Department of Health, for administrative reasons, only provides to people who request their birth certificate the short form.  They do not provide the long form,” Bauer said.

During his interview with Gallups, Zullo pointed out that he knows of a number of individuals who requested and received their “long-form” birth certificate from the HDOH within the last decade.

In an interview with The Post & Email on Wednesday evening, Zullo said that the pro-Obama “Deep State” prevented his discoveries about the Obama birth certificate image from undergoing investigation by the FBI or any other federal agency.  “We had nowhere to go,” he said.

Zullo said that there is “significance” to a January 24, 2009 letter allegedly sent by the White House under Obama’s signature to Kapiolani Medical Center for Women & Children and the birth certificate forgery. Purportedly written to celebrate the facility’s centennial, WND found that the letter was digitally-reproduced on the hospital’s website without an actual photograph or scan of a paper document.

In the second paragraph, Obama purportedly referred to Kapiolani as “the place of my birth.”

The letter was used to publicize a hospital fundraiser and published in the spring edition of its bulletin, “Inspire.”

On the evening of January 24, 2009, then-U.S. Congressman from Hawaii Neil Abercrombie read the letter to the gathering, although straying from its exact wording. Abercrombie has long claimed to have known Obama’s parents from the time they attended the University of Hawaii at Manoa in the early 1960s as well as Obama when he was an infant.

Abercrombie posted an additional statement on his website, apparently referring to questions which had arisen during the 2008 presidential election cycle about Obama’s birthplace and constitutional eligibility:

Settling the question once and for all, he states that Kapiolani Medical Center for Women & Children “is the place of my birth. Hawaii has always been home to me.”

Early in 2010, Abercrombie resigned from Congress to run for Hawaii governor.  After winning election in November, Abercrombie publicly pledged to locate documentation of Obama’s original birth record given that doubts of Obama’s claimed birth in Hawaii continued to swirl among the American electorate.

In late December 2010, Abercrombie told the Honolulu Star Advertiser that he believed that Obama’s birth was “written down” and “exists in the archives,” a puzzling statement given that then-HDOH Director Dr. Chiyome Fukino had said 17 months earlier that she had “seen the original vital records maintained on file by the Hawai‘i State Department of Health verifying Barack Hussein Obama was born in Hawai‘i and is a natural-born American citizen.”

On August 10, 2014, WND reported Abercrombie’s surprise defeat in the Democrat gubernatorial primary, adding that “the authenticity of the letter” purportedly written on January 24, 2009 to Kapiolani “has never been verified by the White House.”

During his interview with The Post & Email, Zullo invoked the far-reaching power of the Deep State, an issue on which we will expand in Part 2.

Will the Obama Birth Certificate Forgery Ever Be Probed by Federal Authorities? added on Thursday, December 7, 2017

21 Responses to "Will the Obama Birth Certificate Forgery Ever Be Probed by Federal Authorities?"