“IN LEAGUE WITH THE DEFENDANTS” 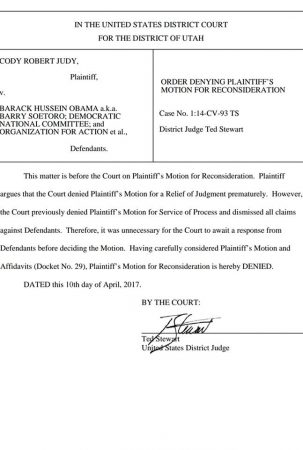 (Apr. 11, 2017) — On Monday evening, the pro se plaintiff in a presidential-eligibility lawsuit in the U.S. District Court for the District of Utah informed The Post & Email that Judge Ted Stewart issued an opinion dated April 10, 2017 denying his Motion for Reconsideration.

The case challenged not only Barack Hussein Obama’s constitutional eligibility to serve as president amid claims of financial injury, but also informed the court of evidence that crimes appear to have been committed in connection with Obama’s tenure.

A one-page document (shown at right), Stewart’s opinion states that because he dismissed the case previously, he is doing so again.

As explanation, Stewart wrote, in part, “…The Court previously denied Plaintiff’s Motion for Service of Process and dismissed all claims against Defendants. Therefore, it was unnecessary for the Court to await a response from Defendants before deciding the Motion.”

Since 2008, Judy has contended that Obama does not meet the “natural born Citizen” criterion set forth in Article II, Section 1, clause 5 of the U.S. Constitution. A presidential candidate himself in 2008, 2012 and 2016, in 2008 Judy filed lawsuits against Obama and Sen. John McCain, Obama’s general-election rival.

Judy maintains that the Constitution’s “natural born Citizen” clause requires the nation’s chief executive to be born in the United States to two U.S.-citizen parents.

Obama claims a birth in Honolulu, HI on August 4, 1961 to a U.S.-citizen mother and British-citizen father who never naturalized as an American.  McCain was born in Panama to two U.S.-citizen parents, one of whom was serving as a U.S. Navy Admiral at the time.

Judy’s dual claims that neither met the constitutional requirement were dismissed by the courts, including the U.S. Supreme Court.

In July 2014, Judy filed a new lawsuit under the Clayton Act, Sherman Anti-Trust Act and Civil Rights Act violations alleging that as a constitutionally-ineligible candidate, Obama had caused financial injury to his own candidacy.  The case was presented to Stewart after Judge Bruce Jenkins recused himself for an unspecified reason.

In response to Jenkins’s recusal, Judy then commented:

Yesterday, July 24th, 2014 I received notice that the originally assigned senior Judge Bruce S. Jenkins recused himself by an order he originated. This Order was not pre-empted with a Motion for Recusal by me or the Defendant(s) in the case.

To my knowledge this has never happened before in any case to date which in some way involved Obama’s qualifications, or injury due to the ineligibility, qualification, or occupation of the Office of the President involving Obama in a plea for the Court’s due process for injury in a Civil Rights and Federal Act violation Complaint associated with the allegations asserted by myself as a Presidential Candidate in the presidential election race(s) 2008, 2012, 2016.

In June 2015, the case reached the U.S. Supreme Court with an application to proceed in forma pauperis, meaning that as a citizen of very modest means, Judy is not able to pay the customary filing, copying and postage expenses.

While both the U.S. District Court and Tenth District Court of Appeals had granted Judy’s request for in forma pauperis, the U.S. Supreme Court, without elucidation, denied it in late September of that year after reconvening from its summer recess.

The high court, however, could have issued its opinion much earlier, Judy said, as he was told by a court clerk that the justices continue to review cases during the months of July, August, and September when they are not in session.

In a recent two-part series published at The Post & Email, Judy detailed developments in the case, which included his informing Stewart in late January, under U.S. criminal code, that new evidence had come to light amplifying his claim that Obama was constitutionally-ineligible to serve as president.

Judy’s Motion for Reconsideration was followed by an Order to Show Cause on February 27, which noted that the court had issued its denial ruling prematurely.

On March 28, Judy filed a Notice for Decision/Judgement informing the court that the Defendants’ deadline to respond to his Motion for Reconsideration was due within a few days, prompting Stewart’s response issued on Monday.

The new evidence Judy presented to Stewart was gleaned from a December 15, 2016 press conference given by Mike Zullo, who led a five-year investigation into an image posted at whitehouse.gov said to be a scan of a certified copy of Obama’s long-form birth certificate.  Zullo, who in 2012 had declared the image a “computer-generated forgery,” revealed that two highly-acclaimed forensic analysts with no knowledge of each other arrived at conclusions very similar to his own based on “nine points of forgery.”

Zullo worked under the auspices of the Maricopa County Sheriff’s Office (MCSO), commissioned by then-Sheriff Joseph Arpaio.  A former detective, Zullo initially led the sheriff’s Cold Case Posse in the probe, later completing all of the extended investigative work alone.

“The court filed its response to the Motion for Relief of Judgement too quickly, which is why I filed the Motion for Reconsideration.  Basically [in Monday’s ruling], the judge was saying, ‘Yes, we did respond too quickly, but the defendants were not required to respond anyway,'” Judy said of the opinion.

In an interview on Tuesday, he told us:

What we have now is a judge to whom I have reported a crime from Sheriff Joe’s Cold Case Posse report from neutral forensic investigators who have nothing to do with Mike Zullo or the sheriff.  We have me going to the court reporting a crime under the two Acts which give me the ability to report a crime, submitting it as new evidence, and the judge refusing to acknowledged the substantial evidence warranting the court’s investigation or trial.

This is a case that shows the judge is in league with the defendants.

The court’s purpose is to bring the evidence to a trial jury or to convene a grand jury.  The judge has a lot of options here.  With the Order to Show Cause that I gave him, the judge had the right to tell the defendants, “Hey, you have to respond to these allegations.”  It gave him a blank line to give them so many days.  The judge had the ability to serve the defendants and give them another 20 days, just like a summons.

This really puts the judge in a compromised position as far as a crime.  This is misprision of felony.

In Part 2, The Post & Email will reveal Judy’s plan going forward and identify jurists whose names will undoubtedly arise.