DOES ANYONE KNOW WHERE OBAMA WAS BORN? 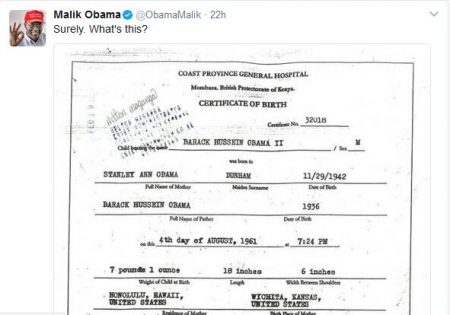 (Mar. 10, 2017) — A “birth certificate” image widely disseminated on Friday evening in a tweet issued by Malik Obama appears to match that which was made public by Lucas Smith in 2009 after he said he traveled to several African countries, including Kenya, and obtained a document from hospital officials.

In June and July of that year, Smith advertised the document he said he had for sale on eBay.

Malik Obama’s tweet was discussed and retweeted extensively on his Twitter feed on Friday night.  There are several Twitter accounts which are easily mistaken for that of Malik Obama, specifically, m.obaidmalik with the subtitle “@malikobama;” “Malik Obama Fan Club,” and “MalikObama2013.”

On Saturday morning, Malik issued a tweet appearing to say that he would be releasing more information about the image.

Also on Saturday morning, a reader of The Post & Email reported that a story with the image appeared in the upper-left corner of The Drudge Report but was soon removed.

On Friday, the UK Daily Mail responded to Malik’s posting of the image by describing him as “attention-seeking,” “bitter,” and having previously said that Barack Obama the younger was “born in the US.”  The publication noted that the image appears to match the Lucas Smith document which eBay removed because of its status as a “government document,” and that it is a forgery.

The document was reportedly filed, along with a sworn affidavit, in a court case brought by Atty. Orly Taitz in 2009 challenging Obama’s eligibility to hold the office of president.

Prior to the 2008 election, credible domestic news articles stated that Obama was born in Kenya or Indonesia, respectively. In May 2012, Breitbart discovered a promotional booklet in which Obama’s then-literary agent published his biography stating that he was “born in Kenya and raised in Indonesia and Hawaii.”

The biography remained unchanged until April 2007, two months after Obama declared himself a presidential candidate.

Article II, Section 1, clause 5 of the U.S. Constitution requires the president to be a “natural born Citizen,” which most Americans believe signifies “born in the United States.” However, some legal scholars say that a simple birth in the United States is insufficient for a person to be considered “natural born” if his parents are not already U.S. citizens.

Prior to the change in administrations, discussion arose in some Republican political circles aimed at introducing legislation which would clarify that the 14th Amendment to the Bill of Rights should not automatically confer U.S. citizenship to anyone born on U.S. soil.

The same argument was used a century ago when Democrat attorney and future ambassador to Italy Breckinridge Long argued that President Woodrow Wilson’s Republican opponent in the race that year, Charles Evans Hughes, was not a “natural born Citizen,” as he was born in New York City to parents who remained citizens of the British crown.

Some believe that the meaning of the 14th Amendment, which Obama invoked on his FighttheSmears campaign website to bolster his claim to eligibility, has been misconstrued over the years to extend U.S. citizenship to anyone born in the United States, regardless of the allegiance or citizenship of their parents and whether or not they entered the country legally.

At some point, Barack Obama claimed to have been born in Honolulu, HI on August 4, 1961 to parents Stanley Ann Dunham and Barack Hussein Obama Sr., a British, and then Kenyan, citizen once that nation achieved its independence in 1963. Some have questioned whether or not Obama inherited British citizenship from his father at birth, making him either solely British or a dual U.S.-British citizen.

In early 2011, then-businessman and real estate mogul Donald Trump publicly challenged the White House to release Obama’s “long-form” birth certificate to prove he was born in the United States. In June 2008, an image appeared at several websites, including FighttheSmears, titled “Certification of Life Birth” showing a birth date of August 4, 1961 and time of 7:24 PM. However, the name of the hospital, occupations of his parents, signature of a physician, and official registrar’s stamp were missing.

After approximately three months of pressure mounted by Trump, the White House posted what it said was a scan of a certified copy of Obama’s original birth record obtained from the Hawaii Department of Health (HDOH).  Over the next 24 to 48 hours, however, several computer experts deemed it a poor forgery.

In August 2011, then-Maricopa County Sheriff Joseph Arpaio commissioned his Cold Case Posse to analyze the image in order to clear it and therefore assure concerned constituents that their votes would not be disenfranchised in the upcoming presidential election. Instead, three days later, lead investigator Mike Zullo informed Arpaio that the image was fraught with problems and could not be considered authentic at that point.

A five-year investigation then ensued during which three press conferences were held to inform the media and the public that the image posted at whitehouse.gov was a “computer-generated forgery.” Also found to be fraudulent was Obama’s Selective Service registration form.

The dates of the press conferences were March 1, 2012; July 17, 2012 and December 15, 2016.  During the latter, Zullo presented evidence examined by two different forensics firms which confirmed the posse’s conclusions that the birth certificate image was created on a computer and did not emanate from a real, paper document bearing Obama’s name.

Neither the media nor Congress responded by launching its own respective investigations to the public’s knowledge, even though Zullo has described the birth certificate image forgery as the “foundational lie” of Obama’s de facto presidency.

Former U.S. Secret Service agent Daniel Bongino has recently stated on his radio show that Obama operatives who he alleges committed illegal acts during Obama’s tenure are now “in panic mode” since Donald Trump, and not Hillary Clinton, is now in the White House.

For approximately a year, Zullo assisted the Maricopa County Sheriff’s Office (MCSO) in overseeing the work of a confidential informant, Dennis Montgomery, hired to assemble and organize documentation he said he possessed showing that widespread government data-harvesting was being conducted on a warrantless basis on federal judges, prominent businessmen to include Trump, Zullo, and others.

Last Saturday morning, Trump took the media by surprise when he tweeted an accusation that Obama had “ordered” his campaign office at Trump Tower to be “wiretapped.” While the media has rushed to defend Obama’s innocence and featured guests denying that the wiretapping took place, The New York Times had already published a report both online and in print on January 19 and 20, 2017 stating that wiretapped information gleaned from “Trump associates” was under analysis by five different agencies of the federal government, led by the FBI.

Prior to the election, a concerted effort was made by left-leaning media to connect Trump and/or his associates to the Russian government. The narrative continues to this day despite no credible evidence having surfaced. However, in the wake of Trump’s claim, the media has demanded that Trump reveal his “evidence” to support the claim that Obama mandated the surveillance of his office.