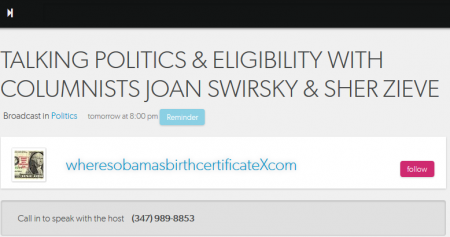 (Feb. 24, 2016) — Join host Gary Wilmott of giveusliberty1776.blogspot.comas he discusses the ineligibility of presidential candidates Marco Rubio and Ted Cruz with columnists Joan Swirsky and Sher Zieve. Gary and his guests will also be taking a close look at the Trump campaign and the current political climate as we move toward the Super Tuesday primaries next week.

Remember to Enter “1” if you wish to talk to the host, make a comment or ask a question of the guests.