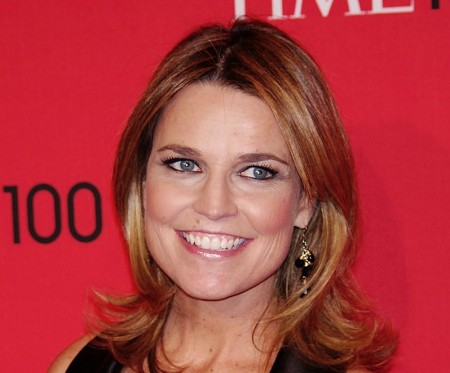 (Feb. 24, 2016) — On Tuesday, as caucus voting in the state of Nevada was under way, NBC News anchor Savannah Guthrie, her co-anchor and “Meet the Press” moderator Chuck Todd discussed “how you would stop (presidential candidate Donald) Trump” in regard to winning delegates in the ongoing caucuses and primaries in the 2016 presidential race.

Trump is a multi-billionaire who earned his wealth in real estate, notably in New York City and in capitals around the world.  He is financing his own campaign and has said he is determined to win.

In response to Guthrie’s question, which posed “a couple different scenarios,” Todd said that “The cleanest way to stop Trump is to hurry up and get this into a one-on-one between Marco Rubio and Trump.” Todd outlined several ways in which that might happen while stating that Trump could gain an advantage by beating Cruz and Rubio “in their home states.”

The male anchor with Guthrie raised the question of a “brokered convention,” which he said is mentioned “every four years.”  “This thing is going to a convention, and it rarely happens; it hasn’t happened for more than 60 years,” the anchor said.  “Could this be the year, though?”

Todd explained how, if among “three or four different candidates” no candidate has a decisive lead, “we’re going to a brokered convention.”

Guthrie then said that “one other theory” to stopping Trump’s momentum was that a latecomer could file the required documents to run in the Republican primary.  Todd replied that someone had suggested to him that Mitt Romney might be such an individual.  Todd also suggested that other “favorite sons and daughters” of the Republican Party might enter the race “simply to try to beat Trump, deny him delegates and create another way for a brokered convention.”

Todd concluded that that hypothetical situation “is the most farfetched.”

After Romney became the nominee in 2012, Trump campaigned for him in the very close contest with Obama. At approximately 4:38 p.m. on Wednesday, as this article was going to press, Romney was quoted by Fox News’s Neil Cavuto as having said that he “had reason to believe” that Trump’s tax returns may hold “a bombshell.”

Guthrie’s NBC resume states that one of her keynote interviews was one “in which the billionaire discussed his comments regarding President Obama’s birth certificate.” On April 27, 2011 the day of its release,  Guthrie proclaimed that it contained a “raised seal,” purportedly indicating its authenticity.

Guthrie was the only reporter to make such a claim and was promoted two months later to “Today” co-anchor at the network.

Guthrie’s tweets regarding the “document” she held in her hand that day as she was interviewed by now-demoted NBC anchor Brian Williams, who was found to have embellished his news reports on several occasions, suspended for six months and reinstated at NBC offshoot MSNBC last year, are no longer accessible.

The “document” was later declared a “computer-generated forgery” by the Maricopa County Cold Case Posse, along with Obama’s Selective Service registration form.

Posse lead investigator Mike Zullo reported early in the four-year investigation that the person or people who created the forgery are known and that one or more Obama supporters, termed “Obots,” are employed within DARPA, a division of the Department of Defense.

More than a year after the long-form birth certificate image was released, Wolf Blitzer of CNN accused Trump of “beginning to sound a little ridiculous” in regard to his lingering doubts about its authenticity.  Blitzer disregarded the announced conclusions of the Cold Case Posse on March 1, 2012 stating that the only documentation the government had released on Obama is fraudulent.

In its minimal reportage of the two press conferences held by Zullo and Arpaio, the mainstream media has failed to include any documentation which would refute the posse’s findings and support their doctrinaire approach to the matter.

Contrary to Blitzer’s claim that “the state of Hawaii confirmed the legitimacy of Obama’s birth certificate.,” no one from the Hawaii government ever said directly that the short-form “Certification of Live Birth” released by an unknown party on June 12, 2008 nor the long-form image posted at whitehouse.gov is authentic.  In fact, Maricopa County Sheriff Joseph M. Arpaio, who commissioned the posse’s investigation, said that “the government of Hawaii” is complicit in the deception of the American people with the birth certificate forgery.

CNN misreported the facts when it claimed that there is a “state law that allows certain public officials to examine a person’s actual birth certificate if there is a ‘direct and tangible interest.'”  Rather, the Hawaii statute invoking “direct and tangible interest” limits those who can obtain a certified copy of any vital record to family members, legal guardians and descendants upon proof of such relationship.

Obama himself has “roasted” Trump over his call for him to release proof that he was born in the U.S. and denied that he was “forced” by Trump to do so.

Trump’s doubts about Obama’s documentation have been termed “birtherism” now a frequently-used term by the mainstream media.

On October 24, 2012, ABC News reported, “Donald Trump today pledged $5 million to a charity of President Obama’s choice, provided the president makes public his college applications and transcripts and releases his passport history, a far cry from the October-surprise bombshell Trump had promised” under the title, “Donald ‘Bombshell’ Fails to Blow Up.”

Last fall, CBS News focused on Trump’s failure to “correct” the statements of Americans who perceive that Obama is a Muslim and does not have a legitimate birth certificate to prove that he was born in the United States despite the Cold Case Posse’s announced conclusions.

Fox News Channel host Sean Hannity recently asked Trump if he would prosecute Hillary Clinton for using a private computer server and email address while exchanging highly-sensitive government information through unsecured channels, to which Trump responded, “…certainly, it has to be looked at.”

In December 2007, Matthews declared that Obama was “born in Indonesia” and had “an Islamic background” but later attacked anyone questioning Obama’s birthplace in Hawaii.  In December 2015, MSNBC’s Chris Matthews dogged Trump about his 2011 push for Obama to release the long-form birth certificate when he asked, “You really believe this guy is an illegitimate president?”

Is that the very discovery which the media fears the most, along with its possible complicity in protecting that “illegitimate president”?

Does the Media Fear a Trump Presidency? added on Wednesday, February 24, 2016