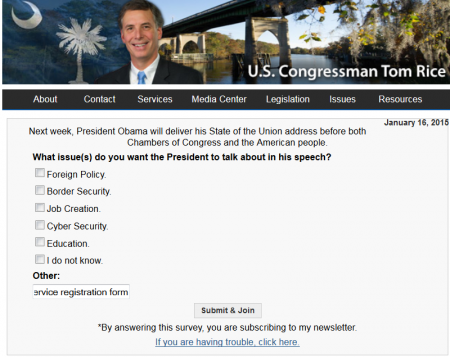 In responding to Rice’s query, The Post & Email wrote under the category “Other:”  “The forgeries of his long-form birth certificate and Selective Service registration form.”

Exactly one year ago, Rice introduced the STOP Resolution, co-sponsored by five other members of the U.S. House of Representatives, with the objective to “institute legal action to require the President to comply with the law” after Obama announced unilateral changes to his health care law and other “executive actions” deemed by some to be unconstitutional.

The number of cosponsors of the resolution rose to 119 in February of last year.  There does not appear to be an update posted on Rice’s website as of this writing.

On January 7, 2015, White House senior adviser Dan Pfeiffer announced a “Spoiler Alert” to Obama’s upcoming SOTU speech.  Included in his commentary was the statement, “In two weeks, President Obama will deliver his seventh State of the Union address (technically, it’s his sixth, because the first one isn’t considered a State of the Union for whatever reason, but avert your eyes Politifact).”

The reason that a president’s initial speech to Congress is not termed a “State of the Union” address is that the chief executive has not been in place long enough to provide the “state of the union.”

Obama’s first address was given on February 24, 2009 and promised, among other things:

While our economy may be weakened and our confidence shaken; though we are living through difficult and uncertain times, tonight I want every American to know this: We will rebuild, we will recover, and the United States of America will emerge stronger than before.
The weight of this crisis will not determine the destiny of this nation. The answers to our problems don’t lie beyond our reach. They exist in our laboratories and universities; in our fields and our factories; in the imaginations of our entrepreneurs and the pride of the hardest-working people on Earth. Those qualities that have made America the greatest force of progress and prosperity in human history we still possess in ample measure. What is required now is for this country to pull together, confront boldly the challenges we face, and take responsibility for our future once more.

On July 2, 2014, a writer for the Oregon Business Report wrote about a study conducted by The Brookings Institution which reported that “business deaths now exceed business births for the first time in the thirty-plus-year history of our data.”

Obama also promised to “cut the deficit in half by the end of my first term in office.”  The federal government is now $18.2 trillion in debt as compared to $5.768 trillion when George W. Bush left office.

The welfare of our country is the great object to which our cares and efforts ought to be directed, and I shall derive great satisfaction from a cooperation with you in the pleasing though arduous task of insuring to our fellow citizens the blessings which they have a right to expect from a free, efficient and equal government.

Obama’s Department of Homeland Security (DHS) has virtually suspended all deportations as a result of “executive actions” Obama declared would be enacted following a November 20, 2014 address to the nation without Congress passing a law, as is required by Article I of the U.S. Constitution, which Washington helped to draft in 1789.

With a 68% increase in “undocumented immigrants from countries other than Mexico, primarily from Guatemala, Honduras and El Salvador,” in fiscal year 2014 over the prior year, deportations decreased from 368,644 in 2013 to 315,943 in 2014 in a trend which showed that a higher percentage of those deported had criminal records.

In 2013, approximately 36,000 illegal aliens were released from ICE detention into unsuspecting U.S. communities who had been convicted of such crimes as murder, sexual assault, kidnapping and aggravated assault.

Obama is also releasing terrorist detainees at the U.S. prison in Guantanamo Bay, Cuba on a regular basis with the goal of closing the facility, something he had promised his supporters in 2008.

Last week, following terrorist attacks on a French newspaper, Jewish grocery store, and a French policewoman in the street, the Obama regime said that terming the cause “radical Islam” is “not accurate.”

Before his first presidential election, Barack Obama said, in the context of executive overreach, that he “took the Constitution very seriously.”

Doubts have existed and grown since 2007 that Obama met the eligibility standards to serve as president in regard to the “natural born Citizen” clause contained in Article II, Section 1, clause 5 of the U.S. Constitution.  While Obama claims to have been born in Hawaii, no hospital will confirm it.  In late 2007, commentator Chris Matthews stated publicly that Obama was “born in Indonesia.”  In May 2012, it was discovered and reported by Breitbart News that Obama’s literary agent had published an official biography of Obama stating that he was “born in Kenya and raised in Indonesia and Hawaii.”

A person’s birthplace is not the only factor to be considered when determining “natural born” status, according to numerous constitutional attorneys and historians, who have found that the citizenship of the parents was at least equally important.

Obama claims a father who was never a U.S. citizen.  On his 2008 campaign website, FighttheSmears.com, Obama admitted to being a “dual citizen of the U.S. and Kenya” at his birth, which was also reported by Factcheck.org.

Facing mounting pressure from businessman Donald Trump, who in early 2011 was considering a run for the presidency to challenge Obama the following year, on April 27, 2011 the White House released what it said was a scan of a certified copy of Obama’s long-form birth certificate obtained from the Hawaii Department of Health by Obama’s personal attorney, Judith Corley.  Within 24 hours, however, the image was declared fraudulent by graphics experts who were willing to go on the record with their claims.

In August 2011, a group of Tea Party members approached their sheriff, Maricopa County Sheriff Joe Arpaio, to ask for an investigation into the image to determine if their votes would be disenfranchised in the upcoming 2012 presidential election if the reports of forgery proved accurate.  Arpaio agreed, thinking that a cursory examination would “clear the president.”  In September, he appointed his Cold Case Posse, which works at no cost to taxpayers, to conduct the probe.

After 72 hours, the posse reported to Arpaio that the image could not have originated with a paper document.  The investigation then continued, with Arpaio launching his own separate probe tangential to the posse’s findings.

At a second press conference on July 17, 2012, the two lawmen called upon Congress to launch its own investigation of their findings.  However, Congress has refused to take up the issue despite thousands of calls, letters, and in-person meetings from constituents.

Last summer, a congressional staffer admitted to a reader of The Post & Email that “we know the birth certificate is a fake.”

After submitting our response to Rice’s survey, we received an acknowledgement screen tallying the percentages to each category provided on the form except “Other.” 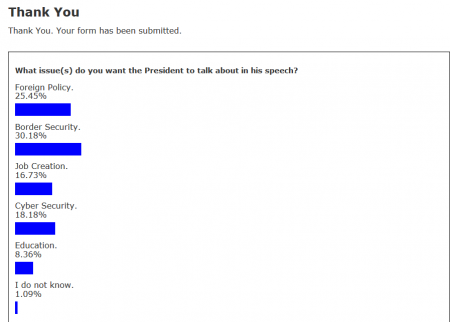 Rice’s contact information appeared at the bottom of the newsletter.

Member of Congress Asks for State of the Union Topic Suggestions added on Friday, January 16, 2015