“A MASTER PLAN TO TAKE DOWN AMERICA” 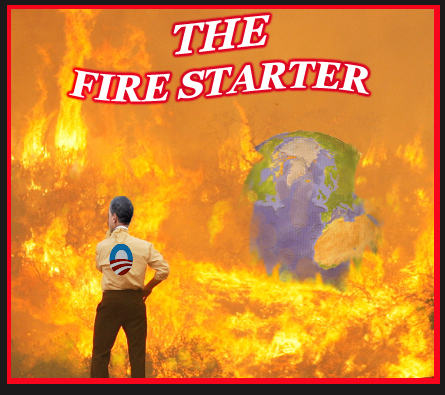 (Aug. 3, 2014) — The arsonist, the most vile of all creatures who dwell on this planet, comes in two basic forms. The first of the two types is a person devoid of compassion. He is self-centered and for some ungodly reason has developed a desire, a passion to see destruction, death and misery consumed by an inferno of his making.

The second type is the mercenary, the hired arsonist who has contracted for the demise and ruin of people, places and institutions, for profit.  Both are evil and despicable organisms devoid of empathy or the ability to sense any level of guilt.

Rare is the individual who encompasses both of these characteristics. He who enjoys the preparation, the art, and the act, as well as profiting from it is the true Fire Starter.

Metaphorically speaking, not just Americans, but people across this globe, have been subjected to and are living with the impending results of the most vicious Fire Starter since the evil decades of the 30’s and 40’s of the twentieth century.

From the very beginning of his usurpation, his unlawful and unconstitutional acquisition of the office of the Presidency, his fire starting began.  Like a devilish imp, vacuous of concern of or for those plighted, he starts a small little fire, making sure enough tinder is nearby to feed its growth, he then moves on, perceived in innocence and blamelessness, and ignites another seemingly harmless flame, in yet other volatile hot spot.

Now, after just four years short of a decade, these fires here and around the world having been strategically located and sufficiently inflamed, have grown out of control and are merging into a single massive fire storm which may well engulf our planet in a conflagration of war and economic collapse.

For those volunteer fire fighters, better known as Tea Party patriots, who have been investigating these fires, warning of the ones to come, while working under the continuous assault from the left, progressive RINOs and the Marxist media, the following list of the Fire Starter’s accomplishments will be of no surprise.  So here are just a few, summarized for the sake of compassion, for our readers:

FIRES AROUND THE WORLD

As we ponder these wildfires, as well as the many not mentioned here, one might be inclined to suppose, maybe this guy is just incompetent and careless with his matches. But, as bad as that might be, it’s not the case.  All of this, all the fires he has started, all the flames being fanned, are the result of a master plan to take down America and her way of life.

While it is certain the Fire Starter has been enjoying the scars he has inflicted on this country, there is more to it.  Someday the world will uncover the plot and the profits which have fueled and rewarded this arsonist.  This worst of all arsonists, the Fire Starter.