Slavery at the Hands of Environmental Fascists 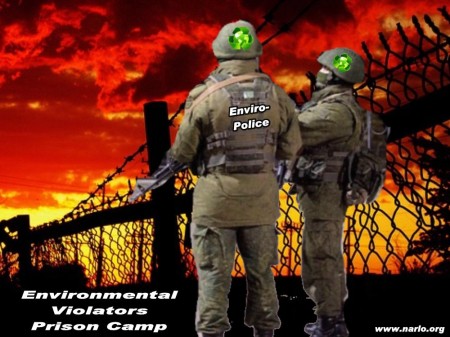 (Aug. 3, 2014) — We have come to the sad realization that there is very little difference between radical environmentalism and Islamo-Fascism, except in method. Both are fanatical religions (cults) and both seek dominance over human behavior, based on their invalid and arrogant assumptions that “their way” is the only “right way” and all else must capitulate to “their right way,” or suffer the full wrath of “their” law, or their “justice” of barbarous Jihad. Any means to enforce compliance through intimidation, lies, distortions and propaganda justifies their devilish ends.

Evidence of radical environmentalism abounds, especially in Western countries. If we believed in conspiracy theories, we could easily connect the dots between radical environmentalism and radical Islam, each with the sole purpose of bringing down the West. Each of these religious cults seeks dominance for their own agenda and each will use any “weapon” at hand to reach their goal. In the case of western countries, radical environmentalists use incessant lobbying for legislation, (law) or file multiple lawsuits to achieve court decisions in their favor, with the force of law. They obtain grant monies from government (our tax money) then turn around and sue the government with our money. In contrast, radical Islam uses physical force, barbarism, intimidation and threats of death and outright mass murder to ensure compliance. The net result is the same, subjugation of people, cultures and entire countries for a phantom objective that has nothing to do with science, reason, logic, human rights or freedom and everything to do with med-evil cultism and top-down, tyrannical control by an elite few.

It is hard to imagine that a group originally organized to clean up our rivers and waterways from industrial pollution, could have, in such a short period of time, infiltrated every level of our government and every institution and morphed into a radical cult. They did it by creating false crises and then peddling those crises to the naïve public who then gave these groups millions upon millions of dollars in donations. The top five environmental groups and there are over 4,000 in the United States alone, have assets in excess of $10 Billion dollars. That is a formidable war chest and a formidable enemy to defeat. Agenda 21, smart growth, sustainable development, biodiversity, endangered species, saving every wetland, the Wildlands project and man-caused global warming are just part of this massive fraud being perpetrated on the citizens of the United States. The laws they have lobbied for and passed have done much to destroy our constitutional form of government.

Developing countries thumb their noses at environmental protection. They build dams, coal-fired and nuclear power plants. They drill for oil and natural gas and extract coal and other minerals wherever they like. They have a country to build and a growing population to feed and that takes energy. While the West allows radical environmentalists to inhibit or outright stop energy production and pass and enforce draconian environmental laws, other countries go on about their business without a glance over their shoulder. Global warming concerns – they have none. Polar bears, snail darters, spotted owls and other so-called threatened or endangered species, aren’t even an after thought.

The American Planning Association (APA), from which most city and county comprehensive plans are derived, has adopted the radical United Nations Agenda 21 accord of draconian environmental regulation of private lands.

Name any eco-system, rural area, wetland, glacier, prairie, ocean, sound, river, lake, stream, dry wash, gully, desert, or estuary and you will find a group of environmentalists, along with pseudo scientists that are environmentally brainwashed and indoctrinated in our liberal colleges, planning its management.  Environmentalists do not think in terms of freedom, liberty, individual and property rights, free markets, free choice, capitalism, or constitutional safeguards like the Fifth Amendment. They only think of the survival and management of the natural system they are planning at the time.  As part of their planning, they are planning every aspect of your lives as well, in order to integrate your life with the highest of all priorities, saving the planet from the scourge of mankind.  They only see in one color, “green.”  But think of their “green” as the color of slimy slugs.  Think of their “green” as the color of stomach bile.  Because that will be what is crawling all over and eating away at your freedom, liberty and property rights when their plans are passed into law by a sympathetic government.

Unfortunately, Western countries can’t wait to bow down to the God of Green because for almost 50 years the radical environmentalists, aided and abetted by vote-stumping politicians, the UN and Europe, have shoved down our collective throats by lies, distortions and propaganda, that we are arrogant, self-indulgent and totally responsible for “killing” the planet. These fanatical conspirators play on our guilty conscience to con us into paying exorbitant taxes to fund blue-sky policies with no clear government purpose and tell us that we must not only give up their definition of our decadent lifestyle, but that we must give up our God-given, inalienable rights as well.

Radical environmentalists receive most of their billions (that’s right – billions) from one-world-order elitists, socialized industrialists with a guilty conscience because of their wealth, government grants, and the misguided, hapless, naive individuals who have bought into the “green” propaganda. Those billions give radical environmentalists the power and political influence to manipulate governments and the courts to reach their final objective of control over all human activity and behavior, no matter what the cost to the economy and no matter if their actions result in the loss of freedom, liberty and property rights.

Free men everywhere have been trapped into this mindless madness by their proclivity to give in to mass hysteria. In other words, if a lie of an impending crisis is told often enough, it becomes the perception of truth and requires immediate and expensive solutions that the propagandists have ginned up. It is abundantly evident that the lie that is radical environmentalism is the embodiment of incarnate evil that will strip us of our free will, our pride, our money, our property, our liberty and ultimately our very sovereignty.

“PROTECTING THE ENVIRONMENT IS LAUDABLE.
TRASHING THE CONSTITUTION TO DO IT IS TREASON.”

What are the solutions to this massive con game that has the Western World on its knees, perpetrated by the cult that is radical environmentalism?

1. Seek the truth, use your intellect, vet the propaganda, pierce the veil that is radical environmentalism and expose their evil, once and for all. Contrary to what the radicals preach, the sky is not falling and the Earth is no more dangerous than it always has been. Learn that we must adapt to changing weather and environmental conditions, like all species who wish to survive and that we can clean up our act a little but whatever we do will have little impact on our galaxy, our solar system, or this giant earth that has a mind of its own, over which we have no control. The Earth will be here long after we are gone and it was here billions of years before we ever arrived on the scene as aborigines, or alleged civilized men and women. Our survival is the one in question if we don’t adapt, not the Earth’s. We are arrogant as a species to think otherwise.

2. Start a wholesale election of local, state and federal politicians that know the truth and will defend our freedom and our sovereignty under our Constitution and return us to a Constitutional Republic, the hard-won design of our Founding Fathers. Inflict term limits upon those who have made a career out of being sleazy and corrupt politicians.

3. Start educating your kids against the egregious onslaught of public school “green” and “socialist” propaganda and indoctrination. Your children are the next leaders of the next generation and whatever they are taught, they will remember and it will color all of their current beliefs and future actions, including political ones. Only you as parents can prevent that premeditated brainwashing.

4. Start talking to free thinking people about these issues and discuss your own solutions to maintaining your freedom for you, your children and your grandchildren. Maybe your neighbor doesn’t care, but you had better.

5. Take an interest in all politics because whatever the politicians do or don’t do will have a major impact on your wallet, your property and your freedom.

6. Finally, to solidify and compare your own principles, your own foundation of beliefs, check out NARLO’S “18 principles for America” at: www.narlo.org/18principles.html. Without principle, we build our houses on shifting sands.

While we sit on our hands, the environmentalists and their willing partners plan.  While we try to fight one of their environmental insanities, they are planning another insanity for us to fight just around the corner.  They have divided us so that we are working against each other.  They use “made-as-instructed, best-available-science propaganda to deceive us.  They use the law to enslave us.  They use international pressure from Europe and the United Nations to break us down and corrupt our laws.  They use our emotions against us to make us feel guilty.  They pit naive, dependent, brainwashed city dwellers against independent thinking, self-sufficient rural landowners.  Since there are more city dwellers, the rural landowners are at the mercy of the city dwellers.

Never have so many been so duped by a dirty little evil that transcends anything that Mother Nature can throw at us.  Never have so many been conned by an ideology that is camouflaged in gentle sounding names and wrapped in religious phrases that “touch” our hearts, but leave our minds numb and unthinking and our wallets empty.

All of this would be reasonably understandable for a backward culture steeped in tribalism.  If this grand scheme to enslave an entire country, or the planet, occurred 2,000 years ago, when the average individual’s point of reference included a hut and just enough food on the table to maintain survival, albeit a poor one, it might be excused.  But for an educated civilization that exists in America today, or any advanced and educated country, it is totally mystifying and without precedent.  We have to ask:  are people really this dumb?

Slavery at the Hands of Environmental Fascists added on Sunday, August 3, 2014