THE “JEWEL IN THE CROWN” 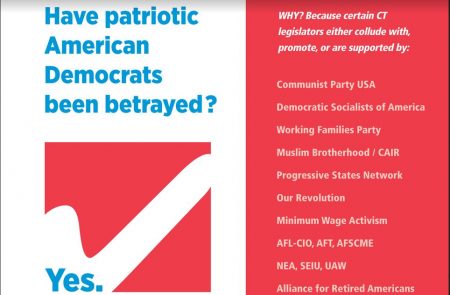 (Oct. 3, 2020) — On Wednesday, The Post & Email interviewed a member of a three-person team who spent the better part of this year preparing an electronic booklet detailing connections between socialist and communist influences and candidate incumbents for elected offices on November 3.

The organization Patriots for the Constitution is based in Connecticut and contacted us by email late last month with a letter stating, “America is under attack” and “Communists, Socialists, and other enemies have successfully infiltrated our political system and pose an existential threat to our and our children’s future.”

The group does not have a website, our interviewee said, but welcomes inquiries into its work at the email address and telephone number provided at the bottom of the letter.

Further, the letter states, the “Democratic incumbents” featured in the group’s 28-page report possess “connections with known violent and rioting organizations, such as BLM and Antifa,” with “both being funded by the Chinese Communist Party.”  The report, or “matrix,” first asks, “Have patriotic American Democrats been betrayed?”

“Yes,” it contends, citing Trevor Loudon’s work and other public reporting indicating that Connecticut’s five congressmen, all of whom are seeking re-election next month, have ties to “seditious organizations” such as “Our Revolution,” the China Communist Party/CPUSA, labor unions, the Working Families Party, The Muslim Brotherhood, Democratic Socialists of America (DSA) and others.

According to Loudon, as published in The Epoch Times, “Connecticut is the CPUSA’s ‘jewel in the crown.’”

The matrix also includes Connecticut’s two U.S. senators, Chris Murphy and Richard Blumenthal, whose re-election is not on the ballot this year; dozens of Connecticut legislators, all Democrats; and the state’s executive leadership to include Gov. Ned Lamont, Lt. Governor Susan Bysiewicz, Attorney General William Tong, Secretary of the State Denise Merrill, and others.

On Friday, Murphy said on CNN that since President Trump will be off the campaign trail for the foreseeable future due to his coronavirus diagnosis, Trump’s “surrogates” will be campaigning on his behalf, to include Russian president Vladimir Putin.  The host, Jim Sciutto, did not challenge Murphy’s assertion.

The matrix is presented in vivid graphical format, page 22 of which depicts Karl Marx, the “father of communism,” as having said, “Keep people from their history, and they are easily controlled.”  Another slide quotes from “The Naked Communist: 45 Communist Goals” by Cleon Skousen while depicting an American statue being toppled in apparent keeping with “Communist Goal #7”:  “Eliminate all good sculpture from parks and buildings.”

Slide 26 compares the “Defund the police” mantra arising from the May 25 death of George Floyd while in Minneapolis Police Department custody to “Communist Goal #38,” cited as “Transfer some of the powers of arrest from the police to social agencies.”

The project to expose communist and other anti-American influences began in 2018, the team member told us, producing a report then.  “This has blossomed; I reached out to a friend in California who used to be in Connecticut and ran a high-profile campaign in California in 2016, and he asked the other two team members to do a mini-version for California, which they did,” she told us. “He’s going to use that out there, and then that morphed into a mini-version for Minnesota and Michigan.  The hope is to keep this going.”

“In terms of the matrix, I think we’re finding pretty similar results.  Of course, we hadn’t done the CGA (Connecticut General Assembly) in 2018.  I think we’re all passionate about getting the word out on this; it’s obviously not something the mainstream media carries at all.”

“What do you see as the biggest threat coming from China right now?”

“The very close relationship between the Chinese Communist Party and CPUSA is exceedingly concerning.”

“What personally drives you to do this?”

“What has driven me has not been the ‘communism,’ even though that’s concerning me more and more.  I was totally apolitical until 2009, when someone sent me a video of Brigitte Gabriel talking about Islam and sharia.  When I found out about [Connecticut State Senator] Saud Anwar and his connections with The Muslim Brotherhood, I flipped out.  So that’s been my primary concern.  Then, of course, I dealt with some people on the Tigers baseball team issue with Miles Prentice, who ended up losing the team because CAIR confronted him about his chairman-of-the-board status with the Center for Security Policy.  So that’s my passion going into it, not that I think communism is any less of an important concern.”

Early Saturday afternoon, The Post & Email was unable to reach Anwar’s page at the CGA website from three different sources.

The group intends to continue its work into the 2022 election, the team member told us, while anticipating that members may change over time.