These were the words of Barack Hussein Obama, Jr., – the nation’s Second Usurper-in-Chief (“SUC”) – as he met in the Oval Office with his co-conspirators on January 5, 2017.  The words prove, beyond any reasonable doubt, that the SUC not only knew about the efforts of the Deep State, the FBI, the Department of Justice and the entrenched intelligence apparatus to torpedo the Trump presidency even before it started, but that he was also directing them.  He was, after all, the guy who parks his shoes up on the Resolute Desk in the Oval Office.  What a flaming churl…, and a constitutionally ineligible one at that.

And as if the electorate needed any additional reason to reject Biden in November, it is now rumored that the Biden “short list” for his Vice-President running mate – stated otherwise, the running mate being dictated to Slow Joe by the Deep State “real” power brokers, including the SUC – now has on it Elizabeth (“Pseudo Cherokee”) Warren and Kamala (“Not-a natural-born-citizen”  Harris.  The third rumored candidate is… wait for it…: Susan (“That-vile-video-caused-the-Benghazi-attack”) Rice.

The purpose of the meeting – called, apparently, by the SUC – was to plot a course of action to continue the seditious putsch against incoming President Trump.  The mechanism was a bogus and, as we now know, illegal entrapment ploy of General Michael Flynn, President Trump’s then-soon-to-be National Security Advisor.

On January 4, the day before the Obama Oval Office Putsch Meeting – and because Beltway denizens love acronyms, let us abbreviate it as the “OOOPM” – the FBI had concluded that there was nothing untoward or problematic about some phone calls that had taken place between General Flynn and Russian Ambassador Sergey Kislyak.

The FBI was preparing to close its investigation into General Flynn with a “no action” decision because no “derogatory information” had been found.  To borrow a phrase from an old TDS text between Peter Strzok and his “close friend” (aka, paramour) Lisa Page: “There was no ‘there’ there.” 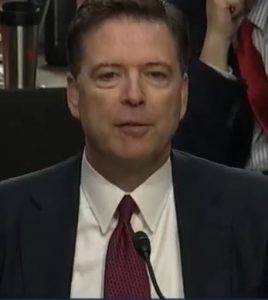 However, before that closure decision was finalized, instructions were received from the FBI’s “7th Floor” and Comey’s cabal to keep the case open.  A new plan of attack needed to be devised.  All of the people called into assembly at the OOOPM conclave were united in the objective of making sure – call it part of an “insurance policy” – that the incoming president’s administration would be undermined and crippled from the outset.

President Trump’s biggest mistake when he took office January 20, 2017 was vastly underestimating the depth and extent of the Deep State’s deceit, mendacity and toxicity – not to mention its racism reaching all the way into the Oval Office – being marshaled in opposition to him.  The brash “outsider” from New York had soundly – and to millions and millions of rational Americans, joyously – humiliated Hillary (“BleachBit”) Clinton.

Accordingly, from the SUC’s perspective, no effort could be spared to ensure two things: (1) that President Trump fail in office, the future soft coup d’état via impeachment being but a twinkle in Obama’s eye at the time, and, of equal importance; (2) that the one person who could uncover all of the deceitful and illegal actions of the Obama administration – General Michael Flynn – was to be quickly convicted of a crime – any crime – so that he could be taken out of commission and banished to Ft. Leavenworth, thereby ensuring that the felonies of the SUC’s administration would remain secret.

Damn those deplorable, unwashed American voters, the SUC likely thought: did they not understand that Clinton was supposed to be coronat…. ummm…, elected?  Could they not read and understand the pollsters and the gurus at the Gray Trollop, the WaPo, CNN, MSNBC and the broadcast media?  Who on Earth did they think they were, anyway?  People with free will?

At the OOOPM on January 5, 2017, James Comey told the assembled co-conspirators that the phone call (or calls) between General Flynn and Kislyak “appeared legit.”   There went that reason.   Clown Biden – then masquerading as Vice-President under the SUC – chimed in that one other avenue of attack on General Flynn which might be explored was to accuse him of a Logan Act violation for speaking with Kislyak.

As pointed out here, the “Logan Act” idea that Biden floated may actually have originated in a 2006 episode of “The West Wing” NBC – television series.  If true, it would not be the first time that Biden has stepped on his necktie over charges of plagiarism.

The point, however, is that Biden’s comments about the Logan Act and Comey’s remarks that General Flynn’s phone calls appeared “legit” did not result in an order to forget about targeting Flynn.  Instead, the result was an order from the SUC to “[m]ake sure you look at things – have the right people on it.”  Those words do not ring of an instruction to “throw in the towel.”  Instead, they sound a lot like “let’s double down on these #!^>%#-)@&^<)$ and make sure they are stopped.”

The SUC even went so far as to “suggest” to clownette Susan Rice that she send a self-serving (oh, yeah, and BTW “cover your derrière”) email to herself confirming that he had purportedly instructed the OOOPM participants to do everything “by the book.”

The trouble is, of course, that the “book” to which the SUC was referring was not the U.S. Code.  Instead, it was likely either Saul Alinsky’s “Rules for Radicals” or the “Communist Manifesto” by Marx and Engels.  Even now, the precise “book” remains unidentified.  Perhaps the SUC could elaborate in a deposition…, but I digress.

In prior times, the actions of the OOOPM participants would have been described as “treason” and/or “sedition.”  But that was then, and now is now.  The constitutional crime of treason, set out in Art. 3, § 3, Cl. 1, consists only of “levying war against the United States or adhering to its enemies by giving them aid and comfort.”  While the OOOPM certainly gave “aid and comfort” to the Deep State, no declared open “war,” as that activity is commonly understood (q.v., World War II), existed against the incoming new president, so “treason” as strictly defined may be a misnomer.

On the other hand, the term “treasonous,” used as a descriptive adjective, connotes acts involving or guilt associated with “betraying one’s own country.”  While the propagandists at the Gray Trollop and the WaPo would no doubt cobble together cosmetic narratives that the OOOPM was an act of fidelity and/or patriotism by the SUC and his cabal, it was – in fact, in reality and in law – an act of betrayal of the will of the electorate.  Not to mention the Electoral College and a host of federal laws relating to the investiture of presidents.

If ours is, as Lincoln noted in the Gettysburg Address, a nation “of the people, by the people and for the people,” the OOOPM was a treasonous – if not outright “treason” – act against them.

As for sedition, the only federal statute which might have application to the OOOPM seems to be 18 U.S.C. § 2384 addressing the crime of “Seditious conspiracy.”  The potential problem with that statute, however, is that throughout, it describes the proscribed acts as taking place “by force.”

The term “force,” when used in a criminal statute, connotes violence or physical threat of violence.  On the other hand, compulsion or a communicated threat to “do this or something bad will happen” could also constitute force.  For example, when SUC administration prosecutors threatened to indict General Flynn’s son unless he plead guilty to “lying” to the FBI, a jury might well consider that to be “force.”  Indeed, a recognized synonym for “coercion” is “force.”

Thus, it remains unclear whether the OOOPM constituted a “seditious conspiracy” within the language of the statute, since the direct target of the gathering was General Flynn rather than the indirect target, Donald J. Trump.  Perhaps Attorney General William Barr might want to look into that aspect of the meeting.

Speaking of Mr. Barr, he recently assured the nation that in response to the chaos and crimes being perpetrated by Antifa and the violent wing of the BLM – the “BLM2” wing – the Department of Justice would “hold those who are responsible accountable.”   If an Antifa thug or BLM2 goon tosses a Molotov cocktail at a police cruiser and gets caught, it sounds as if Barr will be prosecuting that thug/goon.  We shall see.

On the other hand, Attorney General Barr stated last May that, with respect to the Durham investigation into the origins of the “Trump-Russia Collusion” hoax, he did not anticipate that criminal investigations would be opened into either the SUC or Slow Joe Biden.  That statement, of course, predated revelation of the Strzok notes taken at the OOOPM.

If Attorney General Barr is true to the law-and-order doctrine that those who commit crimes – like the thugs of Antifa and the goons of BLM2 – must be “held accountable,” there is only one principled response he can now have to the revelations exploding out of the OOOPM: a criminal investigation needs to be opened into the roles played by both the SUC and Biden with regard to the baseless prosecution of General Michael Flynn.  Perhaps an inquiry into the roles of the SUC and Biden could take place in a civil damages lawsuit for false and malicious prosecution brought by Flynn’s superb legal counsel.  Your faithful servant would pay big bucks to sit in on a deposition of the SUC conducted by Sidney Powell.  Hot caramelized popcorn.

Any other response from Barr will start to sound as if he has been drinking too much Beltway Deep State tap water.  If the long-term effects of that fluid on Supreme Court Justice Roberts are any indication of its dangers, Barr should also consider switching to Perrier.  Or, consistent with MAGA principles, seltzer from Safeway or Kroger.

One Response to "The OOOPM"