“LEGISLATING FROM THE BENCH”

(Jun. 22, 2020) — Many of the more significant and impactful U.S. Supreme Court decisions in the recent past have been decided on sharply divided 5-4 or 6-3 opinions, including cases such as National Federation of Independent Business v. Sebelius (the “Obamacare” case) (5-4) and more recently, Department of Homeland Security v. Regents of the University of California (“DACA Dreamers” case) (5-4).  Chief Justice John Roberts, siding with the liberal wing of the Court, authored both the Sebelius and DACA opinions.

The DACA decision, in particular, has met with scathing – and, parenthetically, well-justified – criticism.  The dissenting opinions of Justices Thomas, Alito, Gorsuch and Kavanaugh are far better reasoned and confirm that the majority opinion, written by Justice Roberts, is tethered only to political expediency rather than logic or law.

Indeed, to call Roberts’ opinion (and the concurrences therein by Justices Ginsburg, Breyer, Sotomayor and Kagan) unprincipled is to vastly understate the problem.  The Founders would not approve.  Senator Ted Cruz articulated a particularly insightful critique of the decision on the Senate floor here.  Watch the whole clip… it is good.

As noted in a Wall Street Journal (“WSJ”) article captioned “On DACA, Obama Can, but Trump Can’t: The Supreme Court endorses a double regulatory standard,” the paper asserts that the decision is deeply flawed.  The opinion holds, in essence, that while “president” Obama could have signed an executive order (which he himself had admitted was unconstitutional) and implement it while he was SUC (Second Usurper-in-Chief), President Trump could not rescind the order because he and his agency, the Department of Homeland Security, had not sufficiently articulated a basis for the decision to rescind it… as if its illegality and unconstitutionality were not already enough and the continuing illegality somehow immunized it from rescission.

So an illegal executive order – void ab initio (i.e., void from its inception) – cannot be rescinded until John Roberts is satisfied that a sufficient reason has been presented and proven to justify its rescission?  This is nonsense draped in gibberish, then elevated to an art form.  Roberts, a Hah-vahd law graduate, has apparently forgotten about the void ab initio legal principle, a doctrine noted in Justice Thomas’ dissent.

Also noted by the WSJ article was the “practical consequence” of the opinion that, in Roberts’ view, a president apparently is free to create by executive order an illegal or unlawful policy without congressional legislation and put it into practice, but a future president cannot lawfully rescind or “undo” it without first jumping through the labyrinth of administrative and regulatory hoops erected to protect governmental or executive actions, a process which can take years.  The WSJ concludes: “This is an invitation for executive mischief, especially by presidents at the end of their terms.  They’ll issue orders that will invite years of legal challenge if the next president reverses them.”

Memo to faithful P&E readers: one president’s mischief is another president’s opportunity.  Stay with me here for a little longer.

If there is no way of getting John Roberts to stop breathing Beltway air and drinking Deep State tap water – over time, those two commodities affect your brain, and not in a good way – then perhaps it is again time to consider the gambit of the 110-mph fastball discussed here.  That prior post – admittedly out on the left-field warning track, if not beyond – proposed amending 28 U.S.C. § 1 to increase the size of the Supreme Court from nine justices to thirteen.

Opponents would call this “court packing.”  Normal folks would call it bringing the Court back to its collective senses and adherence to the Constitution as it is actually written rather than as some judges would wish it were written.  Of late, Roberts and some Associate Justices have increasingly engaged in legislating from the bench instead of adjudicating from the bench, a pernicious and dangerous tendency.  Populating the Court with conservative jurists – judges who will promise to drink only non-D.C. sourced bottled water – will help bring the Court back from the edge where Justice Roberts has steered it.  No guarantees, but nothing ventured, nothing… you know the rest.

There is no provision in the Constitution prescribing the number of justices authorized to serve on the Court at any one time.  While the number of justices has varied over the years – from as few as six in 1789, when the Court was first established, to as many as ten between 1863 and 1866, when it was reduced to nine – the number has been prescribed by federal statute.  The current language of 28 U.S.C. § 1 provides: “The Supreme Court of the United States shall consist of a Chief Justice of the United States and eight associate justices, any six of whom shall constitute a quorum.”

However, now that the Wizards of 1 First Ave., NE have cobbled together the DACA rule, there is apparently no need for the cumbersome mechanism of seeking or obtaining congressional input to change the numerals set out in 28 U.S.C. § 1.  President Trump should be seen as now being empowered to issue an executive order increasing the number of associate justices on the Court from nine to thirteen and establishing a quorum at seven or eight.  Boom.  Done.  He should, of course, go through the exercise of seeking the “advice and consent” of the Senate as otherwise required by the Constitution, but that would be considered a mere formality.

Granted, the likelihood of this happening may be remote, but in times like these, those kinds of responses to the dangers facing the nation cannot be completely disregarded.  One is reminded of the phrase that “desperate times call for desperate measures,” not to mention the corollary principle of “fighting fire with fire.”  If Democrats can make that kind of a threat, proposing an increase in membership to fifteen, why cannot President Trump do the same at a more moderate number of thirteen? 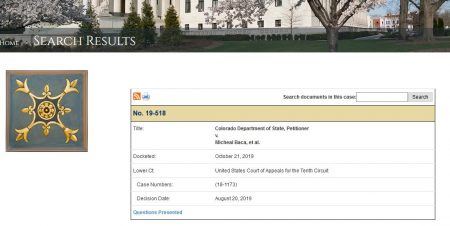 This is not an idle question, as there are still some important cases “hanging fire” at 1 First Ave., NE, and John Roberts is still the Chief Justice.  And if you still doubt the gravity of the situation, consider your faithful servant’s offering here.  The Baca case involves a so-called “faithless elector” from Colorado, Micheal (not “Michael”) Baca, and his battle with Colorado over the casting of his electoral vote for John Kasich instead of Hillary Clinton in 2016.  The Colorado Secretary of State voided his electoral vote because although Hillary Clinton won the popular vote in 2016 in Colorado, Mr. Baca “voted his conscience” and, contrary to Colorado law, cast his electoral vote for John Kasich.

He and two other similarly coerced electors – including his wife, Polly Baca – filed a complaint in U.S. District Court in Denver, only to have it dismissed.  They then appealed to the U.S. Court of Appeals for the Tenth Circuit, which reversed and remanded, holding that Colorado’s action voiding his vote for Mr. Kasich, and coercing the two other electors to “toe the line,” was illegal.

Although it was not directly implicated in the case, the decision of the Tenth Circuit Court seemed clearly to signal that the National Popular Vote Compact would be “dead on arrival” if the Tenth Circuit decision withstood an attack.  As background, the NPVC agreement would require participating states to pledge all of their Electoral College electors to vote for the presidential candidate who garnered the most popular votes nationwide, not just in that particular participating state.  Thus, even if in one participating state the popular vote was for the Republican candidate, if nationwide the popular vote went for the Democrat candidate, that state’s electors would be required to cast their electoral votes for the Democrat.

There are a host of other constitutional problems with the NPVC, but the Tenth Circuit decision seemed to articulate the correct result: the voiding of Mr. Baca’s vote for John Kasich – because he did not vote for Clinton – was illegal and, impliedly, unconstitutional.  Thus, by the same reasoning, the NPVC would be unconstitutional as well.

Not so fast.  The Colorado Secretary of State sought review of the Tenth Circuit decision by way of a petition for certiorari in the U.S. Supreme Court, seeking to reverse the Tenth Circuit and reinstate the voiding of Mr. Baca’s vote for John Kasich instead of Hillary Clinton.  Guess what: instead of denying the petition – as happens in well over 90% of the petitions filed – the Court accepted the petition.  And in over 75% of cases accepted by the Court for review and oral argument, the result is a reversal of the lower court decision.

The Baca case was argued in tandem with a similar case from Washington, Chiafalo v. Washington, on May 13, 2020.  Unlike the Tenth Circuit decision in Baca, the Washington Supreme Court in Chiafalo upheld that state’s statute dictating how an elector must vote.  Yes, Virginia, the same state where its Democrat governor, Jay Inslee, is allowing murders to take place in the People’s Republic of CHOP (formerly known as part of downtown Seattle).

Watch closely for decisions in the Baca and Chiafalo cases, especially since John Roberts is still breathing Beltway air and sipping Deep State tap water (although rumor has it he also likes Perrier).  If a majority of the Court rules in either case that the states have the power to dictate to federal electors of the Electoral College how their votes must be cast – affirming in Chiafalo and reversing in Baca – look for a renewed frantic push to get additional states with enough electoral votes (74 are still needed) to meet the 270 electoral vote threshold before this November in order to ensure the election of a president via the “compact” rather than by the principles set forth in the Constitution…, oh, and in Federalist 68.

Such a result would not bode well for President Trump in November…, nor for America into the foreseeable future.

Maybe Justice Roberts should be sent a few cases of Perrier.  Soon.

The DACA Rule, the 110-MPH Fastball and the Fate of the Electoral College added on Monday, June 22, 2020