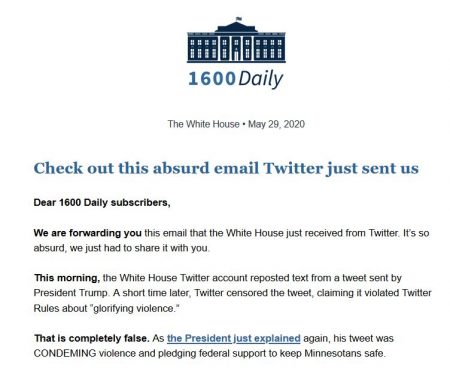 (May 29, 2020) — In a Friday evening edition of the daily White House newsletter, “1600 Daily,” the administration reported that in response to an anonymous “complaint” about Trump’s early-morning tweet which Twitter, in fact, obscured with a warning that it violated the company’s policy against “glorifying violence,” Twitter wrote in a second response:

We have investigated the reported content and could not identify any violations of the Twitter Rules (>https://support.twitter.com/articles/18311<) or German law. Accordingly, we have not taken any action at this time.

Check out this absurd email Twitter just sent us

We are forwarding you this email that the White House just received from Twitter. It’s so absurd, we just had to share it with you.

That is completely false. As the President just explained again, his tweet was CONDEMING violence and pledging federal support to keep Minnesotans safe.

The email we just received, presumably sent by a different team within Twitter, admits that the very tweet they are censoring does not violate any Twitter Rules.

Twitter’s own staff just made this much clear: Twitter is a publisher with an editorial viewpoint, NOT a platform.

See the email below for yourself: 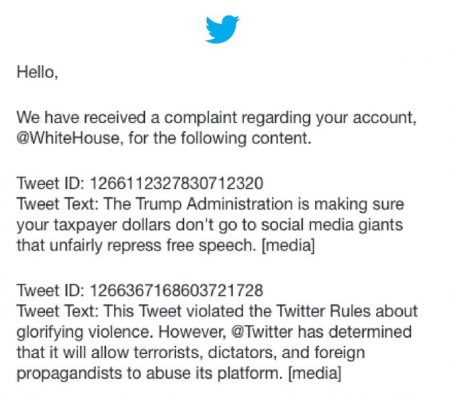 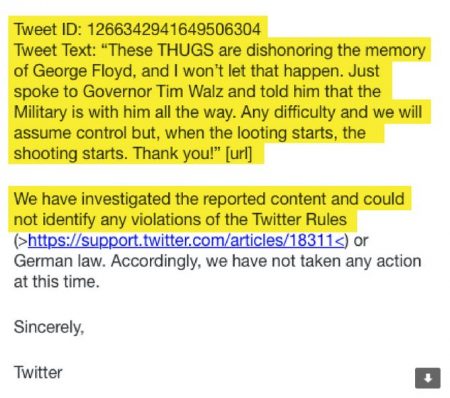